Fan Theory About 'Dead to Me' Changes Everything | 22 Words 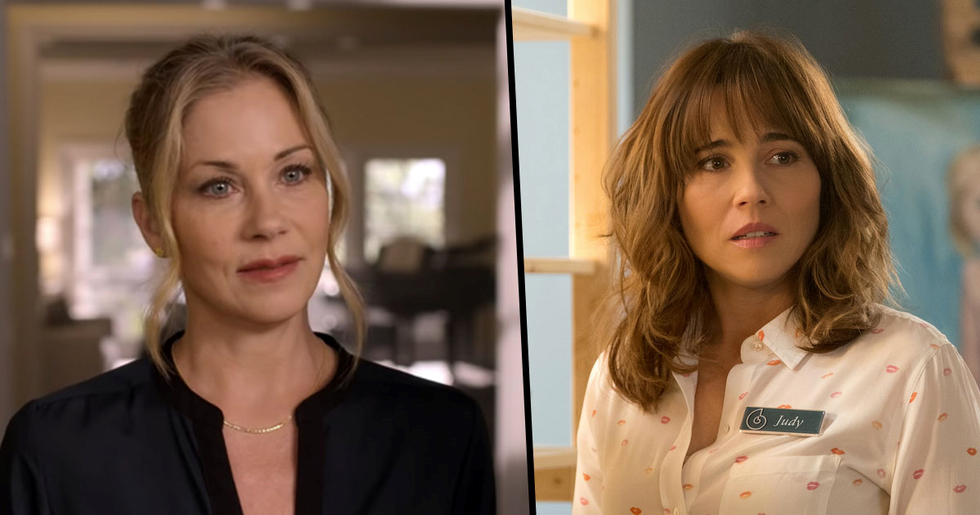 If you haven't already seen Netflix's new dark comedy, Dead To Me, you need to schedule in some urgent TV time to do so.

Not only is this show hilarious and gripping, it also tackles some very difficult issues surrounding grief and loss in a refreshingly honest way.

And, of course, having two strong female leads both over forty in a show is a revelation in itself nowadays.

But it's none of these particular elements that's got viewers going crazy. Oh no. It's the little hidden clues that the clever writers have scattered throughout the season that are really causing all the commotion.

And they have led to so much speculation about certain events within the series. And yes, we will share all these with you.

One fan theory, in particular, is blowing our minds... it's always the one you least suspect.

Dead to Me is a new Netflix show starring Christina Applegate.

It is dark, funny and seriously twisted. Basically, it's our idea of the perfect show.

It was created by Liz Feldman.

Binging Dead to Me on Netflix and wondering why it’s so good and then I see in the credits that Will Ferrell execut… https://t.co/lzJl67EhDQ
— Melessie Clark (@Melessie Clark)1557940764.0

And is executive produced by none other than Will Ferrell as well as Adam McKay, Jessica Elbaum, and Feldman herself.

Unsurprisingly, viewers are loving it.

The show has an approval rating of 86% on review site, Rotten Tomatoes. This is mostly due to the amazing performances by Applegate and her co-star, Linda Cardellini.

In a nutshell, the show is about friendship.

Namely, the one between a recent, and uptight, widow (Applegate) and a free-spirited woman with a shocking secret.

But it also addresses the complexity of grief.

In a truly refreshing and watchable way. It also touches on the subjects of fertility struggles and single parenthood.

Whose husband was recently killed by a hit and run driver. Understandably, she is devastated by the recent events in her life.

A woman that Jen meets at a grief support group and soon befriends. Judy is an eccentric optimist, but all is not what it seems with this tender-hearted lady . . . And in case you are wondering where you recognize her from, she was in Legally Blonde, among other things.

Who plays Judy's ex-fiance, Steve Wood, an attorney. Sadly, things to do not end well for Steve in the series finale of this show. Keep reading to find out what happens to him...

The show tells the tale of Jen desperately trying to find out the truth about her husband's death.

And as secrets are revealed, Jen's life begins to unravel. Is she really better off now that she knows the truth? Namely, that it was her new friend that killed her husband... Or was it? One fan theory suggests otherwise...

But it's the season finale that has really left fans of the show reeling.

In fact, viewers are so obsessed with seeking out hidden clues throughout the series that they are rewatching the whole ten episodes over and over again.

And, of course, they each have their own specific fan theories.

With each one being more mind-blowing than the last. Seriously, we have never seen a show with more twists, turns, and subtle clues that we somehow missed and varying possible outcomes! It's crazy!

Where do we even start? Well, one theory is that Judy's miscarriage and Ted's death are connected.

"How?," we hear you ask. Judy's dress. She wore the same dress during flashback scenes for both her miscarriage and the car ride wherein Ted died.

Did she miscarry because of the accident?

I watched Wine Country last night and have just got to the end of episode one of Dead To Me. Here’s what I think ha… https://t.co/GDuJnXFOBu
— Bethany Wheatley (@Bethany Wheatley)1558205447.0

Or perhaps she hit Ted coming from the hospital and was distraught from her loss?

But some don't believe that she killed Ted at all.

Instead, they think that Steve brainwashed her into thinking she killed him when it was actually Steve himself that did the deed. He's definitely manipulative enough.

There was clearly psychological abuse in their relationship.

With Steve having a weird and worrying amount of control over Judy. Is it possible that it was him who was driving that night, but he somehow convinced Judy that it was her fault and that she was actually the one driving? It's a little out there, but it's a possibility.

Is the gorgeous Nick, an off-duty cop, harboring a deep, dark secret?

Some fans seem to think so. Could he have been the one to kill his partner?

Fans have spotted several clues that indicate that maybe he did.

Although he indicated that it was down to him to take leave from his job, it was later revealed that he was forced to on psychiatric grounds. Why would he lie about this?

And, of course, everyone is talking about who killed Steve in the final episode.

Obviously, it appeared to be Jen. She was the one who stashed the gun in her pocket at the end of the episode and she definitely had a motive for wanting to kill him.

But, in an interview, Feldman has revealed that all is not what it seems.

Saying: "I'll just say that you don't know that she shot him. It's not exactly what you think it's going to be." Well, of course not. That would just be plain boring.

So, if not Jen, who could it be? Charlie?

The youngster had previously spoken about his desire to be the new "man of the house," and it's not out of the realms of possibility that Jen dropped the gun and Charlie picked it up, shooting Steve in order to protect his mother. Or he could have used another weapon as this fan suggests.

Fans already suspect him of killing his partner, so maybe he killed Steve too. Nick had previously confiscated a gun from Charlie, but we never saw what he did with this gun? Maybe he kept it for future use...

And we can't even rule out Lorna, Jen's mother in law.

We definitely think that she has it in her to do something like this and she could easily have followed Charlie to Jen's house. Not that likely, but you never know!

What about a lesser-seen character?

Karen, Jen's neighbor aka Mexican lasagna lady. She was the first character that we were introduced to after Jen - surely that must have some significance? You know how sneaky writers can be...

Why did she suddenly appear again in the last episode?

Surely there was enough going on without Jen needing to invite Karen over for drinks... And anyone who puts raisins in lasagna is definitely one to watch out for.

Could she have possibly have gone back to Jen's house that night?

We know that Karen loves security systems, so when Charlie set off Jen's alarm trying to enter the house, wouldn't that have caught Karen's attention? Wouldn't she have come over to see what was going on? She definitely seemed the nosey neighbor type that would do this.

And if she did go back to the house...

Could it have been her that killed Steve? Well, that's what this Reddit-user thinks. And we kind of agree that an epic start to season two would be Judy, Jen and Karen disposing of Steve's body together.

And the theory is definitely catching on.

I think neighbour Karen shot the man in the pool (no name because SPOILER) at the end of Dead To Me.
— Ifeoma Chukwuogo (@Ifeoma Chukwuogo)1558358213.0

You know the drill with these "whodunnit" shows; it's always the one that you least suspect. Someone who doesn't get a lot of on-screen time but is definitely there for a reason. And what better reason than to return in the last episode to shoot someone?

We do know that she loved guns and even owned some.

Which makes her a more likely suspect than Nick, who previously spoke about his dislike for these deadly weapons.

Could it be that, in the final scene, Karen saw the altercation between Jen and Steve and just acted on impulse?

Whatever the truth, everyone is in agreement that season two is definitely needed.

This poor woman's marriage and our sanity depend on it! We gotta know! Have you finished watching Dead to Me and are dying to watch something equally as binge-worthy? We've ranked the best shows on Netflix right now for you to sink your teeth into! Check it out below!