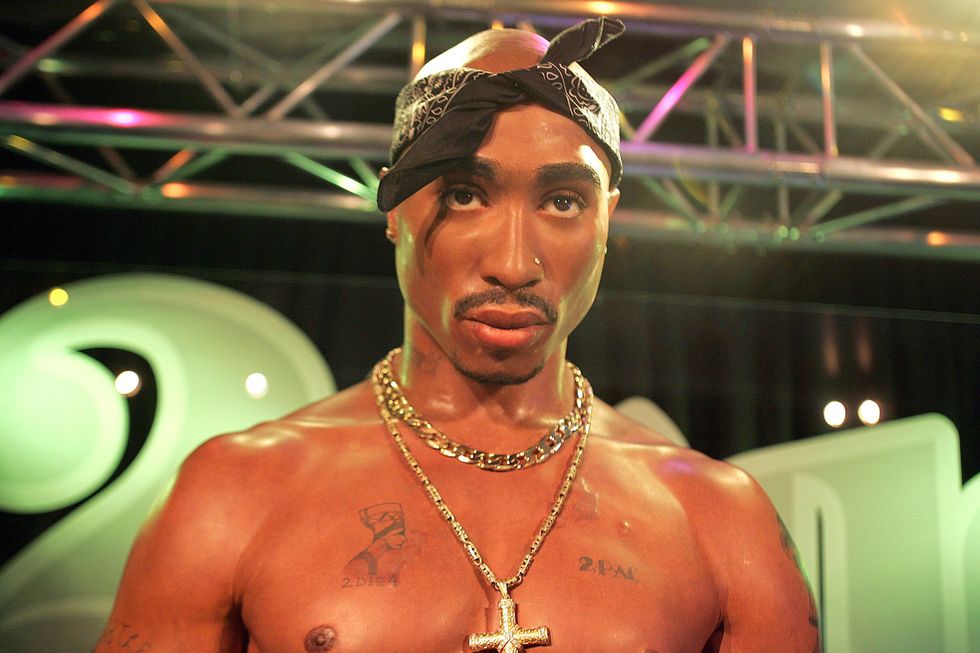 The debate as to whether Tupac Shakur is alive or dead has raged on for years.

Did he really die in the Vegas shooting? Is he living out the rest of his days in Cuba? Did he come back from the dead like a modern-day Jesus? No one really knows.

For years, fans have insisted that they have "seen" Tupac in various locations around the world, but they are usually dismissed or shut down with a more reasonable explanation. But now, old footage has been unearthed from a news report in 2011 and has gone viral because of a man with an eerie resemblance to the rapper wandering around in the background.

And conspiracy theorists are insisting that this is actually Tupac... For real, this time.

Keep scrolling to see the video, and to decide for yourself whether Tupac is alive or not...

Tupac Shakur was murdered... Or so some people believe.

The musician was embroiled in a feud between East Coast and West Coast rappers and was murdered in a drive-by shooting in September of 1996, leaving behind an influential musical legacy at the young age of twenty-five.

Many people believed that rival rapper, Biggie Smalls, was behind the murder of Tupac. The rapper had believed he'd organized a prior shooting, in which he had luckily escaped unharmed, a couple of months earlier. Biggie Smalls was murdered in a similar shooting just months later.

Because his murder has never been solved, conspiracy theories have raged ever since Tupac was shot, with many fans speculating that the rapper faked his own death to get out of the gang wars.

Many different theories as to where Tupac could be hiding out have been brought forward. Some believe he could be living out his days in Cuba. A 2010 interview with Treach, a fellow rapper and friend of Tupac, found him answering a supposedly off-the-record question of “Is Tupac really dead?" with a seemingly assured statement: “Last time I saw him he was in Cuba, man."

The fan theories are wild...

People just really want the rapper to be alive, don't they?

Many believe that Tupac had the best resurrection of all time...

Yo, Jesus. I'm really happy for you and I'ma let you finish but Tupac had one of the best resurrections of all time! #TupacIsAlive #Hologram
— Peter Chao (@Peter Chao)1334564963.0

And, on top of all these theories...

Some people are convinced that they've seen the rapper in the flesh.

But just how legitimate these "sightings" are is another question entirely...

Tupac has been "seen" all over the world.

And there was the time when Pac was spotted at a Celtics V Warriors game...

Back in 2014, fans were very excited when Tupac had seemingly taken some time out of Heaven to cheer on the Celtics.

From the white bandana...

Right down to the identical nose ring, this guy was Tupac down to a tee. The stadium even played "California Love" for the look-a-like but, apparently, he's been coming to Celtics games for years. “Tupac look-a-like has been coming to Celtics games for years. This is the first time I can recall, though, they played ‘California Love’ for him," Camerato, the Celtics reporter, tweeted.

But now, footage that shows a man who really could be Tupac has emerged...

It really might be him this time... I promise!

The footage from 2011 has recently been unearthed...

A live news report from a 2011 Occupy Wallstreet Event in New York began recirculating on social media this week because of the peculiar looking man walking past in the background.

If you take a closer look...

That very well could be Tupac Shakur donning a yellow rain mac, don't you think?

Could it really be him?

I mean, the resemblance is a little uncanny... But I'm not sure how convinced I am. The supposed Tupac is seen mingling in the crowd before looking straight at the camera, and then disappearing back into the crowd.

And, though the man only appears on camera for a matter of seconds, the footage was enough for them to come to the conclusion that it is indeed Tupac.

One Twitter user commented on the fact that Tupac would never appear at such a publicized event, while another pointed out, "I love the idea that Tupac went through the trouble of ditching his multimillion-dollar career, faking his murder and fleeing the hemisphere for 15 years to escape the overlords, but then decided to show up at an Occupy rally in NYC in 2011 without a face cover because why not?"

You can see the full clip here...

And decide for yourself whether it's the real Tupac or not...