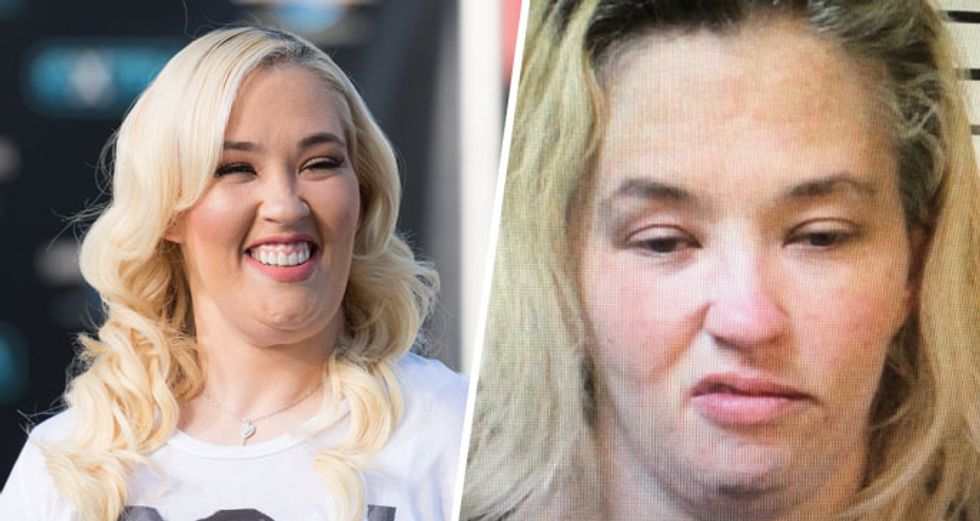 Mama June (real name: June Shannon) came to our screens as something of a comedic figure on smash-hit TLC series, Toddlers in Tiaras. In fact, her daughter was such an excellent TV character that the family got their own spin-off show, Here Comes Honey Boo Boo. But, in recent months, things with the Shannon family haven't seemed quite so funny.

Mama June has always struggled with choosing a good partner, having previously been romantically entangled with child molesters, one of whom has been accused of abusing her own daughter. But her latest partner, ex-felon, Geno Doak, is proving to perhaps be the worst of the bunch. After being charged earlier this year with possession of drugs, it seems like Mama June is continuing down a tragic path of addiction. And her latest public appearance has done nothing to assuage the public's fears.

She first hit our screens in 2011, with Mama June taking her then-five-year-old daughter, Alana "Honey Boo Boo" Thompson, on the pageant circuit in the state of Georgia.

In spite of her relatively humble beginnings, Honey Boo Boo managed to dominate the scene.

Her victories, coupled with her outgoing personality and strange family, meant that the Shannon's got a spin-off show in 2012, called Here Comes Honey Boo Boo. The show centered around the Shannon family.

But, alongside Alana, there was another true star.

June Shannon, known on the show as Mama June, quickly became infamous, thanks to her down-to-earth personality, lack of boundaries, and propensity for gross-out humor.

Mama June was something of a divisive character.

But what not many people know is what a difficult life she had faced up until she managed to achieve reality television fame.

Born in 1979, Mama June had had an undeniably tough childhood - and early adulthood, too.

Thanks to childhood cataracts which remained untreated, June is legally blind. She also became pregnant with her first child at just fourteen years old, forcing her to drop out of high school.

For a while, it seemed like things were getting better for Mama June.

The success of Here Comes Honey Boo Boo seemed to be Mama June's and the Shannon family's ticket out of their redneck lifestyle - and they seemed keen to take it.

She'd long struggled with her weight, her heaviest topping the scales at over four hundred and thirty pounds. She underwent bariatric surgery, including the fitting of a sleeve gastrectomy in 2016, allowing her to lose more than three hundred pounds.

Her transformation allowed Mama June to spin-off her own reality show.

Mama June: From Not To Hot aired in 2017, and followed Mama June on her new diet and exercise regimen, plus her spending of over $75,000 on cosmetic surgery.

Another area of controversy in Mama June's life concerns her romantic affairs.

Her relationship with Mike "Sugar Bear" Thompson fell apart partially as a result of the show. But, even worse, Mama June had a nasty habit of dating child molesters. Here Comes Honey Boo Boo was canceled in 2017 after Mama June rekindled her romance with Mark McDaniel, who allegedly sexually abused the eldest Shannon child, Anna.

But her latest romance may be her most problematic yet.

In 2017, June began dating Eugene "Geno" Doak. Doak is a felon, with charges for burglary, theft, and drug possession, plus has spent time in a psychiatric facility.

Since the two began dating, Mama June has been on a downward spiral.

She was arrested in March this year for possession of drugs in Alabama after a bystander called the police following a violent domestic dispute between the pair.

June's relationship has been a cause for concern.

Both the Shannon family and the general public are worried about how her association with Doak will eventually cause June's life to spiral even further out of control.

In May, the family staged an intervention.

In heartbreaking footage, Honey Boo Boo tells her mother that she wants to come back home, but can't feel safe there so long as June continues her relationship with Doak.

Mama June's recently refurbished smile has fallen once more into disrepair, with her front two teeth visibly rotted away. This has led many to believe that there's some pretty hardcore drug abuse going on.

June appears to be attempting to keep up a pretense of everything being fine.

But her Instagram comments are overloaded with concerned members of the public begging her to get help - and to be a better mother to her daughters.

And her latest public appearance has done nothing to assuage public fear.

Mama June has been avoiding the cameras for a while - likely because she knows that there won't be any good to come from her descent being documented. But, this week, she was spotted out with boyfriend, Geno Doak.

And the images that paparazzi took of the pair were very worrying.

The two looked very much like a couple in the grips of a major drug addiction problem. Both were stumbling, and it appeared that Mama June couldn't keep her eyes open.

The two were grabbing lunch in Hampton, Georgia.

And as they left the Mexican eatery, June's disheveled appearance - plus the blank look in her eyes - has left many fearing for her wellbeing.

There was another sign that all was not well.

June has yet to fix her broken and rotted teeth - meaning they've been in this state for at least three months, and likely longer. For someone who had a whole television show about her physical transformation, this seems pretty strange.

It's hard not to feel for June - and her worried family.

We can only hope that she'll have a wake-up call and make a change - before it's too late. For more information on Mama June's downward spiral, keep scrolling.