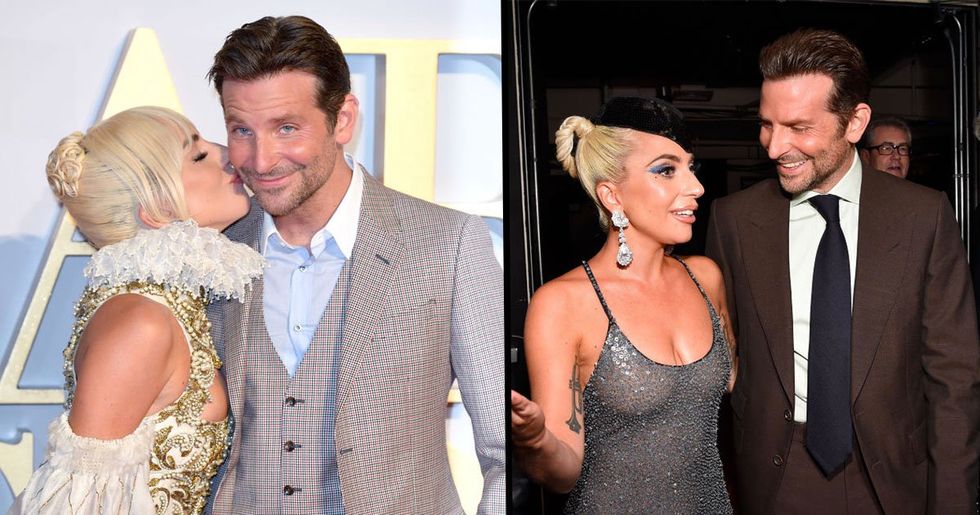 Ever since A Star Is Born first hit the theaters, fans have been convinced there's something real going on between Lady Gaga and Bradley Cooper. Especially now that, rumor has it, Gaga and Christian Carino's engagement is off.

The evidence is plentiful. After Cooper's surprise performance at Lady Gaga's residency show in Las Vegas people have been watching the pair's every move.

Just hours ago a rumor broke out that Lady Gaga has ended her relationship with Christian. Plus, lately she's been spotted wearing her pink engagement ring less and less often.

She also didn't mention him in her acceptance speech at both the Grammys and the Golden Globes.

Christian didn't even attend the Grammys. But Cooper's girlfriend Irina Shayk did and it led to what seemed like some truly awkward tension between the three.

As time goes by, there seems to be more and more evidence that at least Lady Gaga has caught feelings for Cooper.

Sandra Oh was right: in a room full of people Lady Gaga only needs Cooper.

She can get away with it for now since they're still promoting their movie A Star Is Born.

But the fans believe there's more to it.

And they're sure they have just enough proof that the two have real feelings for each other.

Just look at Ally and Jackson. It can't be just good acting, can it?

But the chemistry continues off-screen.

According to Cosmopolitan, that very performance was what really got the rumors going.

One fan, Aoife Kavanagh, shared: "Just watched Lady Gaga and Bradley Cooper performing in Las Vegas and: "1. She’s off her nut and "2. She’s violently in love with Bradley Cooper"

Plus, it just might be that Gaga has ended her engagement.

Social media is going crazy over rumors that Lady Gaga and Christian Carino's relationship is no more.

It's yet to be confirmed, but there's just so many hints that it may be true.

Such as that at the Grammy Awards Lady Gaga's ring finger was bare, Cosmopolitan reports.

Where's that pink diamond ring that no one in their right mind would want to hide?

According to Cosmopolitan, Andrew Brown, the President of WP Diamonds, has identified the ring as a "6-7 carat pink sapphire with a diamond halo totaling 3-4 carats."

"This is likely a high quality, no heat (treatment), pink sapphire," he said.

Cosmopolitan says when an engagement ring is missing on a celebrity's finger, it's almost always because of a break-up.

But Cosmopolitan also believes the ring must be really heavy and uncomfortable, and she can't really wear it all that often.

After all, Lady Gaga didn't wear it during the infamous Las Vegas performance.

That was just a few weeks ago, on January 26. Cooper was there. The ring wasn't.

However, she has been spotted wearing it again recently.

Cosmopolitan says she wore the pretty thing at the Oscar Nominees Luncheon on February 4.

But why wasn't Christian Carino at the Grammys, then?

I really hope that the whole Lady Gaga, Christian Carino breaking up is only rumor. I won’t believe anything until… https://t.co/fv3qdbUgFZ
— Amanda|LadyGaga (@Amanda|LadyGaga)1550212211.0

According to Cosmopolitan, even though Lady Gaga and Carino usually don't appear on red carpets together, he always meets her at the event later on.

Then, of course, she basically lives at the Grammys. She's already got 9 of them.

It's not a big deal for her anymore. So maybe Gaga let Christian skip this one.

But she also didn't mention him in her acceptance speech.

She thanked a few people and spent most of the time speaking about how amazing an opportunity it was for her to work on a film that deals with mental health issues.

And she also forgot to include him at the Golden Globes last month.

Back then, she didn't thank any people at all. Instead, she addressed what it takes to be a woman in the music industry.

Even to us, mortals, that seems like a red flag. But maybe she never followed him in the first place.

After all, Christian posted a new photo of Gaga just over a week ago.

This picture above wouldn't be on his Insta page if they were broken up.

As the caption, Christian included a quote by Marilyn Monroe.

"Beneath the makeup and behind the smile I am just a girl who wishes for the world."

Plus, Cooper is in a relationship too.

Over the years they've been on several trips to Italy together.

They got caught by some sneaky paparazzi and seemed very much in love, Cosmopolitan says. All of that happened while he was filming A Star Is Born.

Oh, and the two have a child.

Their daughter was born on March 21, 2017. They named her Lea De Seine Shayk Cooper.

And although Christian didn't attend the Golden Globes, Irina did.

If she hadn't we wouldn't have this super awkward photo of Gaga third-wheeling the couple's night.

The picture only made the fans go even crazier.

The Petty Mess said on Twitter, "Biggest takeaway from the #GoldenGlobes is that Lady Gaga is full on in love with Bradley Cooper and I feel like they may have had sex at some point."

But then again, Cooper and Shayk might be already engaged.

In it she was apparently showing off a "some sort of sea crab" in her hands, but you could see a ring on that finger.

So is there something going on between Lady Gaga and Bradley Cooper?

Even though there's some "serious" evidence there, the theory is a bit of a stretch.

Especially since Gaga has said herself she would never date Cooper.

She said so in an interview with Howard Stern back in 2016 while A Star Is Born was still in production, according to Cosmopolitan.

That's exactly what he asked.

And Gaga replied, "Absolutely not! I already love everyone and the idea is, if you really love somebody, you put the most important thing first and that is the film."

Lady Gaga added, "The truth is, what's most important to me is that we tell a story that touches the hearts of millions of people that come to see it."