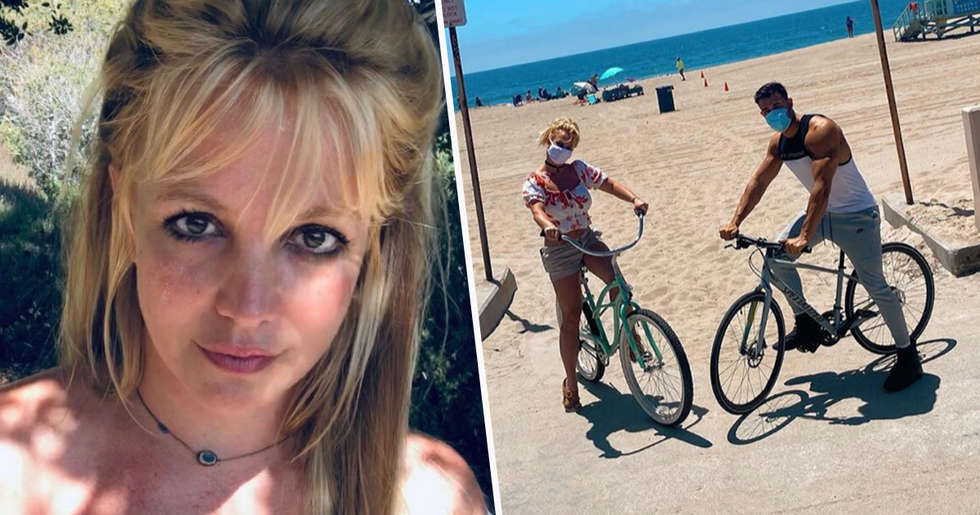 For the last couple of months, Britney Spears has been uploading a series of strange videos to Instagram - fueling the "Free Britney" movement like never before.

But concerns have arisen again after she posted a recent photograph to her socials and it's got fans convinced that she's been replaced by a lookalike.

You'll want to see this one, ladies and gentlemen...

Britney Spears fans are beyond worried.

The star, who was been posting some concerning content on her Instagram has "called out for help" in her most recent post and it's actually pretty frightening.

We all know Britney Spears has battled through years of mental health problems...

And this week matters have reached new heights after a particular post garnered a strong reaction from her followers.

Britney was catapulted into fame from a young age.

Since starring in The All-New Mickey Mouse Club, aged eleven, she embarked on a highly successful career as a singer and performer with the release of the hit single "...Baby One More Time" in 1998.

The singer sat down for an interview on 20/20 in which he revealed that he had, in fact, been intimate with Spears - even though the singer had repeatedly told the press that she planned on remaining a virgin until marriage.

The image of Britney, then aged thirty-seven, emerging from the salon with a freshly-shaven head and attacking a paparazzo's car with an umbrella became one of the most famous snaps of that decade.

Since her 2007 breakdown, Britney's dad, Jamie, has had full control over pretty much every aspect of her life.

A Los Angeles court named Jamie as the permanent conservator of his daughter’s affairs in 2008...

And he was named as the permanent co-conservator of her estate, along with an attorney, Andrew Wallet.

And many are finding the whole set up to be incredibly problematic, not to mention detrimental to Britney's mental health and overall wellbeing.

In fact, this post went viral are for some seriously sinister things about the conservatorship.

"I know some people’s instincts might be to not take this seriously or laugh because the world has made a joke of her existence to a certain extent, but this is a woman who is denied access to her own children, finances, and any control over her own life. The law is corrupt and so are the middle-aged men who are ruining a thriving, successful woman’s life," wrote the fan on Instagram.

Some fans are taking matters into their own hands after seeing some "disturbing" content on her social media.

Supporters of the Free Britney movement have set up a petition that has so far been signed over 102,000 times.

The White House has to respond.

The discussion about mental health has never before been so rife...

But a recent Instagram post has just doubled fans' concerns and within hours, comments about Britney being replaced by a "lookalike" started popping up.

We really hope Britney manages to get the help she needs. Keep scrolling to see why some of her fans are claiming "double standards" for the way the singer has been treated...