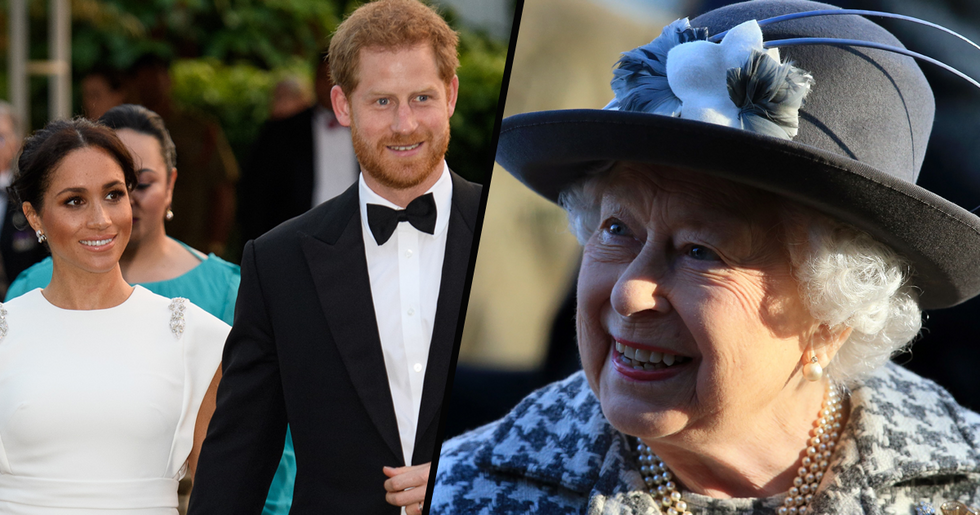 It seems that Prince Harry and Meghan Markle can't do anything right these days, and their recent announcement to disassociate themselves from the British press has ruffled some feathers... and it's all about Queen Elizabeth...

Meghan Markle is very rarely not in the headlines these days.

Whether it be about her marriage to Prince Harry, her charitable work, or what she's eaten for breakfast, the press has developed a bit of a habit of delving into every aspect of the actress's life.

Meghan and Harry are rarely in the headlines for good reasons, sadly...

And the most recent reason has left fans furious with the royal couple. But firstly, let's rewind a few years...

It's been a whirlwind couple of years for the couple...

Making Meghan an official, and the first mixed-race member of the British monarchy.

Meghan has been relentlessly attacked by the press and the British public alike, with many slamming her as "fake" and "not worthy" of the monarchy. Kensington Palace was eventually forced to issue a statement, pleading for the press and the public alike to take a step back when it comes to their scathing reporting and bombardment of Meghan.

And, ever since the birth of Archie...

This pressure evidently became too much for the couple...

Because, a mere week into the new year, they made the shock announcement that, as a family, they will officially be stepping down as senior members of the royal family.

It isn't every day that someone decides to just get up and leave the royal family and, obviously, a few feathers were ruffled.

But, since the news broke, Meghan's critics have only intensified.

She became an even bigger target for the British press, with Piers Morgan branding her a "ruthless social climber' who has spent her life "using people, moving on and ditching them," amongst other things.

And her abilities as a mother have been relentlessly picked apart.

Clearly, people were running out of things to criticize about the young woman...

Meghan has been frequently "mom-shamed" since the birth of Archie.

Last year she came under fire for the way she held baby Archie, with some saying that she could "hurt" him. Attacking a new mom in this way is the lowest of the low.

Meghan can't seem to catch a break, with her every move being criticized by at least one publication. So, of course, it isn't exactly shocking that she's been slammed for the way she parents Archie too.

But Meghan has taken it all in her stride.

The young woman has continuously held her head high bt throwing her energy into the things she loves the most - Her husband, her son, and her charitable work.

Along with Harry and Archie, Meghan has moved back to LA.

She is reportedly happy to be back in her home country where she is able to bring up her son in peace and "away from the British press."

The small family are reportedly hiding out in a secluded compound in LA...

While they work on their new charitable non-profit, Archewell, and focus on being together as a family.

But being in LA hasn't stopped the couple from continuing to be in the spotlight back in the UK...

And it seems that they feel enough is enough.

As a couple, they have told British tabloids that they will no longer be dealing with their outlets.

The Guardian reported that on Sunday night, Harry and Meghan sent a letter to the editors of the Sun, Daily Mail, Mirror and Express saying that from now on they would not respond to any inquiries from journalists working for the outlets.

Harry and Meghan are tired of fake news and lies...

In a strongly-worded attack, they explained that they refused to "offer themselves up as currency for an economy of clickbait and distortion" and accused the outlets of running stories that are "distorted, false, or invasive beyond reason."

We don't blame Harry and Meghan at all for their decision...

And we can imagine this relentless harassment is enough to create cracks in any family.

The British public had something to say about this, and many have been left furious over the timing of their announcement.

Today, the 21st of April, is Queen Elizabeth's ninety-fourth birthday.

Many fans aren't at all happy that Harry and Meghan have made their announcement just days before their grandmother's birthday...

And many feel that this has taken the limelight off the Queen and placed it upon them... which isn't exactly the case.

And it seems that Royal officials are also unimpressed with the couple's timing...

As the world grapples with Covid-19, do they really think people care what media they deal with? Their solipsism is… https://t.co/zBXVCt4d4z
— Andrew Neil (@Andrew Neil)1587365680.0

Political broadcaster Andrew Neil took to Twitter to bash the couple for releasing their statement during the pandemic - a time in which people are anxious and scared.

It seems that no matter what the couple does...

There will be criticism closely following behind. Keep scrolling to read about the time Meghan's website was brutally hacked and trolled...