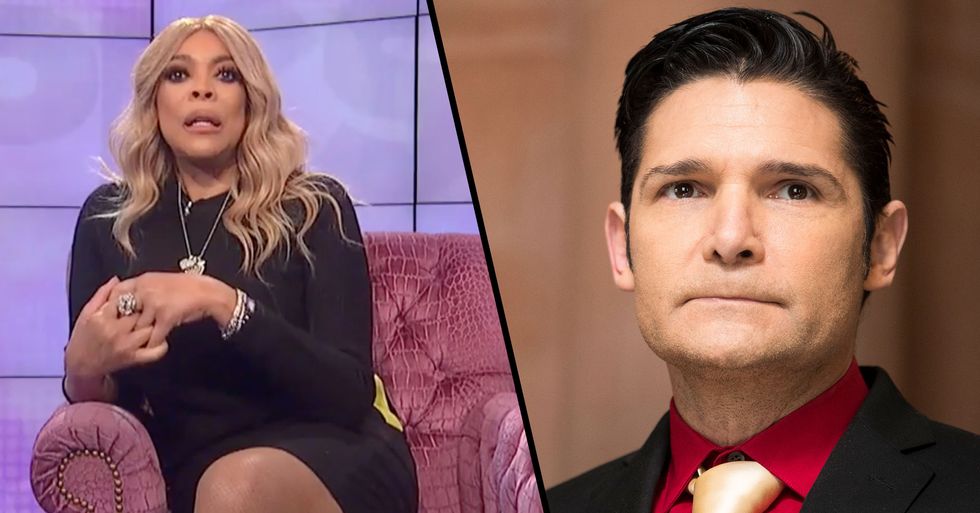 Wendy Williams is known for being outrageously outspoken and this has landed her in hot waters many times.

But the backlash that she has received in recent months hasn't seemed to have sunk in, and she is under fire yet again.

Keep scrolling to learn about her "disgusting" address to Corey Feldman...

She posed with her finger pushing her lip up for a painful 10 seconds while the audience nervously laughed. Not cool, Wendy.

Many found Wendy's mockery to be offensive and disrespectful to people who have cleft lips.

And his persistence finally paid off...

Wrong! Wendy just won't learn from her repeated mistakes, as the latest episode of The Wendy Williams Show proved.

On her episode from Tuesday, she brought up Corey Feldman.

Corey Feldman is a former child actor who has recently been in the midst of public controversy after he claimed his friend was sexually abused by Charlie Sheen.

He has released a documentary about his experiences...

According to a report by Entertainment Weekly, Feldman's movie entitled My Truth: The Rape of Two Coreys premiered on Monday night at a secret screening in Los Angeles. In it, Feldman accused a number of film industry figures of being predatory pedophiles who groomed and preyed upon himself and Corey Haim.

So with Wendy being Wendy...

She decided to address Corey's claims on Tuesday's episode.

She said that the forty-eight-year-old should "go home, sit down, and be glad you aren't dead in the Bronx River for messing with such high-powered people," - suggesting him speaking out should get him killed.

Wendy has known Corey for quite some time now, and he has appeared on the show before...

"Corey, you know I love you. We've known each other for a very long time. But you knew this was never to happen or at least, I knew it. While you were here, there were a few things you said, sitting on the couch, that I was looking at real crookety."

"Like number one, that you will act again. No, you won't. People aren't hiring Corey Feldman, and he's such a lovely man, but he's part of a movement that is so necessary - molesting and raping children - so necessary but even as he was talking about promoting that thing for $20 we were supposed to be watching last night at 11. I knew in my mind and said 'This isn't going to happen' but I put hot topics on it and paid the $20," she went on to say. "And you saw, nothing happened. Now, I want my $20 back. Corey, you owe this show $80. I don't even know where you even thought this was going to actually happen."

She then addressed the content of the documentary that she was unable to watch...

"Corey accused Charlie Sheen of raping Corey Haim when he was thirteen-years-old. The two Corey's are best friends but one of them is dead now - [Haim] passed away. I heard this before, years ago, I wasn't shocked. I wanted to hear something different," she said. "Don't you remember that came out? Don't you remember [The Tale of Two Coreys]? It was on Lifetime. That movie was really good."

Even though Wendy said she had respect for Corey...

Her comments did not go down well with fans... at all.

She has been branded as a "backstabber"...

And many feel that she targets naive and vulnerable people... such as Corey Feldman.

It seems that it is about time that the future of The Wendy Williams Show gets seriously questioned...

You can watch the controversial episode here.