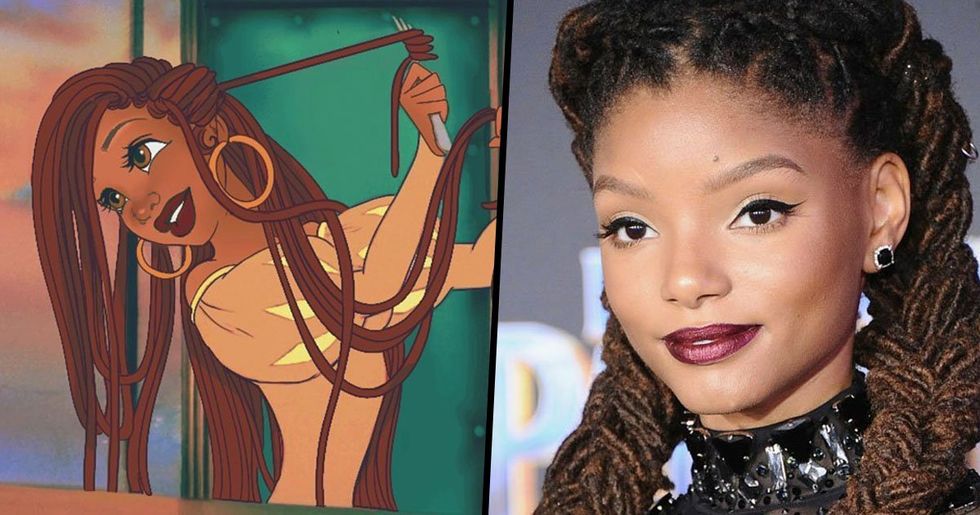 Since the announcement was made that Halle Bailey would be playing the role of Ariel in The Little Mermaid, the internet seems to have spiraled into utter chaos.

Some people were all for it, showering the actress with supportive comments while others took the opposite route, making sure to share their opinion about the "inaccurate" casting. For those of you in the latter group, do me a favor and get over it. Halle is the new Ariel and that is that.

However, those of you that are extremely excited about the release of the live-action, this one is for you! We have collated a bunch of artwork created by fans who are extremely hyped for its release.

Prepare to be stunned.

This piece was created by @lady_nefertitii and emphasizes this user's love for Halle's dreads.

Céli (@aepoyi) mentioned that The Little Mermaid was the first movie to ever make her cry! So obviously she was extremely excited when she heard about the live-action remake. As were we, Céli, as were we.

Users flocked to this post to comment on how this fan artist managed to capture Ariel's "natural beauty."

This one is for all the Halle Bailey haters out there. She remains unbothered by the negativity.

"Halle Bailey, you’re gonna do amazing as Ariel. We got your back." Yes, we do.

Imagine Ariel having flaming, red locks? How great would that be?

Matt (@matt.t.b.r) expressed that he was really excited when he heard the news about Ariel. But that was quickly watered down when he saw his favorite movie "become the center of such disgustingly racist rhetoric."

Brianna (@moonfriedart) was so glad that she will be able to see a princess that looks like her. In modern society, representation is one of the most important factors, and it really shows how far we have come from where we initially started. Seeing primarily white princesses growing up really made it harder for "minority groups" to be able to relate, but now, that has changed.

Users on Instagram commented on how much they loved this piece of art and we agree with them. We're totally in love.

Seeing that fans have created this art is absolutely crazy. This stunning abstract piece really encapsulates the colors and themes associated with Ariel and we're really here for it. This is my personal favorite from the entire bunch.

This piece depicts Ariel as a child. Cute or what?

Zee (@batgirls) wanted to be part of the Ariel fan art squad, so she created this piece to share with the world.

This artist (@Teresewa2) decided to create her piece using ink and watercolors. We adore it!

"This is our Ariel."

In the few days since Halle Bailey's casting has been announced, I've seen so much gorgeous Black Ariel fanart. I f… https://t.co/fejZc7xXoj
— Claire Max (@Claire Max)1562659222.0

Claire (@ClaireMax) felt "compelled" to throw her hat into the ring after seeing so much amazing fan art online.

This user (@AlvinGames_BR) drew his version of Halle as Ariel after he heard the news!

Jamie (@HanyoJai) summed it up well. If race or culture had anything to do with the storyline, it would be problematic, but it doesn't. So we don't see any reason for the hashtag: #NotMyAriel.

Tartle (@Tartle13) felt like she was late to the party, but she shared this amazing piece of art with us nonetheless and we're so glad that she did.

Warm-up painting because I am SO INCREDIBLY HERE FOR IT #TheLittleMermaid @chloexhalle https://t.co/kWom3RE9tq
— Alice X. Zhang (@Alice X. Zhang)1562213919.0

Alice (@alicexz) expressed that she was "incredibly here for" the new Ariel. We're sharing your excitement, girl!

Isabelle's interpretation of Halle as Ariel is absolutely stunning.

And we can't forget about Halle Bailey's post of the iconic Ariel picture. We adore this rendition just as much as the original.

Sean Nash (@Sean_Nash_Art) "just had to paint this to see how it could look!" And we can confirm, it looks amazing!

Have a look at another take on the classic Ariel shot. This one is absolutely stunning. We love it!

"I was happy when I heard about the news of them casting Halle Bailey as Ariel so I couldn't resist I just had to make some fan art or a concept art on how I imagine her in the film as Ariel."

Now, obviously, we have to include a bunch of pics depicting both Ariels in this article...

Some people have described this as the "passing of the torch."

In this house, we love and support both mermaids.

And here's a final message for all the haters out there.