Is Kim Kardashian Trying To Look like Beyoncé | 22 Words 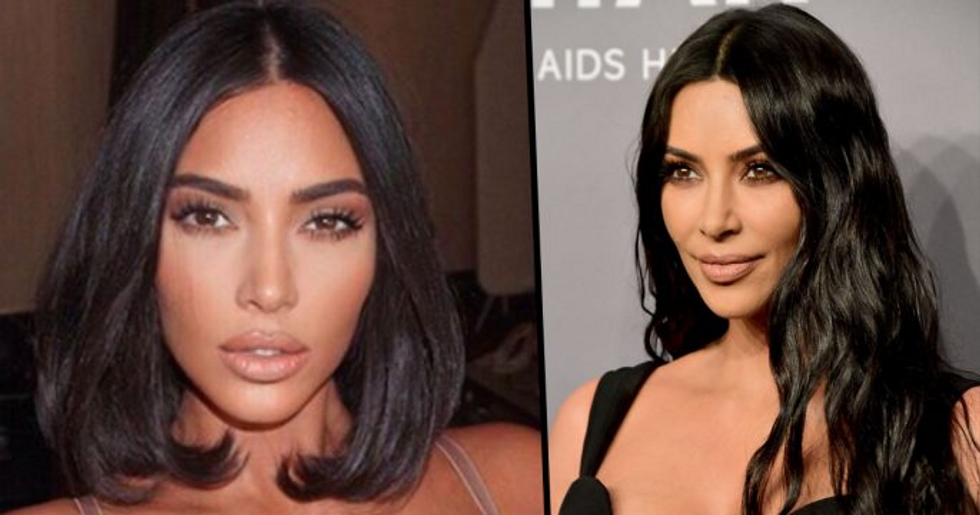 Another day, another Kardashian scandal.

But they don't just make the headlines for their successes, in fact, they often make the news for the endless rumors that seem to swirl around the internet about them. One of the most popular being all things plastic surgery.

The latest? Well, fans seem to think that Kim Kardashian has gotten a whole new face to look like Beyoncé following a series of '90s-themed snaps that the star posted to her Instagram to promote her latest beauty venture.

It seems pretty bizarre, but it's not entirely surprising. Keep reading to see the pictures in question for yourself.

The Kardashians are probably one of the most famous families in the world.

Their reality television-found fame has found them propelled into celebrity superstardom.

And they are always hitting the headlines for something.

No stranger to a scandal, a day rarely goes by when at least 1 of the siblings isn't in the news for something.

And, with the spotlight, comes constant scrutiny of your looks.

From the flashing cameras of the paps to social media, the Kardashians are definitely no stranger to being put under scrutiny by everyone and anyone. Although, by now, the family are probably used to people critiquing their appearances.

As the years go on, the sisters have crafted a very specific look.

You know what we're talking about - pouty lips and the big bum paired with an unrealistically slim waist.

And we all know that it's a pretty unrealistic body type - if you want it naturally that is.

Meaning we can't help but wonder if their bodies are as au natural as they make out. Because surely a good personal trainer and diet only gets you so far.

The Kardashians and their supposed cosmetic enhancements seem to be at the center of a lot of speculation.

Because, let's be honest, they just aren't truthful about it. Remember when Kylie Jenner denied having lip fillers even though it was glaringly obvious? And then later admitted to actually having the enhancement because she was insecure about her lips? When you're in the public eye, whether you like it or not, you have a level of responsibility to be honest about how you've achieved a certain look. So many naive young teens follow the family online and will think that their appearance is completely natural and attainable.

But some of the sisters have been scrutinized for their questionably "fake" appearance more than others.

And Kim Kardashian is certainly up there. The second eldest sibling is arguably the face of the family - after all, we all know that she's the favorite child, as mom, Kris Jenner, jokingly admitted several times on their show. But with this fame comes a lot more rumors and a heck of a lot more headlines about her ever-changing look.

If we hit rewind, we can see that Kim Kardashian rose to fame for being friends with a very famous A-lister.

The star was first known as a friend of, and assistant to, Paris Hilton. And, of course, we can't forget about that tape with Ray-J.

She essentially became known as "famous for being famous."

Although, in recent years, Kim has kind of managed to quash part of that label after branching out into the beauty and legal industries.

The thirty-eight-year-old mom of 4 is now a fully-fledged businesswoman.

She's also training to be a lawyer.

Yes, that's right. Following her work with prison reform and successfully helping release several people from jail,  the internet went into a state of shock and dismay when the star announced that she was enrolled in law school and was officially training to become a lawyer. But hats off to Kim, putting in the hours for school all while having 4 young kids must be tough, and given all the fortune she has, there really is no need for her to be studying - which clearly shows that she's passionate about it.

Despite some positive press to do with her legal work, she still can't get away with people focusing entirely on her looks.

Obviously it's amazing that Kim is trying to use her platform for good, but there's no getting away from the fact that people love to scrutinize her appearance.

The star has always sparked controversy with her head-turning looks.

Remember that Paper Magazine front cover that quite literally broke the internet? We can always rely on the star's revealing outfits, consistent inability to follow the Met Gala theme, and photoshop fails to cause a stir.

And her alleged plastic surgery is no exception.

From her world-famous butt to chiseled face, people can't help but speculate whether it's actually all down to perfect lighting, filters and "drinking lots of water."

Although the star has always denied anything of the kind.

Despite being faced with accusations of nose jobs, fillers, boob jobs and, of course, butt implants, the star has remained unmoved on her stance that she is plastic surgery-free. But it's definitely hard to deny that, despite training and eating well, her visibly different appearance over the years raises eyebrows.

Well, the star is far from escaping any such rumor as this week as she's sparked cosmetic surgery speculation again.

Over the last few days, Kim has been posting '90s-inspired snaps to her Instagram to promote her latest KKW Beauty collection based on the decade.

But instead of rushing to her site to put their orders in, fans have been pointing out something about the pictures.

Kim may have been giving everyone the fashion-forward '90s aesthetic that seems so popular right now - but it hasn't worked out too well for her.

The controversy started with this picture.

The star bears striking resemblance to the late R&B singer, Aaliyah, in the snapshot posted a week ago, and, while Kim is clearly just trying to channel her inner '90s, it hasn't gone down very well, with fans branding the image as "disrespectful," and "unfortunate."

It was all downhill from there...

On the same image, fans also commented on the star's nose, accusing her of getting a nose job, and saying that she generally looks barely recognizable.

But this certainly wasn't the end of it for the star.

When the star posted a snap sporting her ordinary makeup, fans were convinced that she'd gotten work done - which the star has never confirmed. Whether it's down to really good contouring or a hint of FaceTune, she definitely does look different.

In fact, her face seems to have changed so much that fans are now comparing her to Beyoncé.

Yep, fans can't help but notice how much the star's face has altered - and how she now looks more and more like Queen Bey's long lost twin sister.

Although this didn't go down well with some Queen Bey fans.

Like this fan, who believes that Beyoncé will always top Kim - although we shouldn't be pitting the pair against each other - they both look good in their own way.

Others think that Kim looks like someone who got plastic surgery in an attempt to look like Kim.

Unfortunately for Kim, the rumors have continued, with fans describing her "new look" as looking like someone who got plastic surgery to resemble Kim Kardashian, but it didn't quite work out. Ouch.

But some fans have pointed out that her look is the work of some tactical contouring.

We all know that makeup, when applied skillfully, can completely transform your face. Many of the star's fans have rushed to her defense, saying that the plastic surgery accusations are far-fetched and that her different, Bey-resembling face in her latest snaps is simply down to a good makeup artist.

Basically, no one can seem to figure the mystery out.

But either way, its Kim's face and body, so it's up to her what she does with it. Although it isn't just her supposed plastic surgery that the star has come under fire for recently. Kim recently released a line of body-makeup as part of her KKW Beauty empire, which has sparked some major online controversy. But it's especially been rubbing actress, Jameela Jamil, up the wrong way. The star is a well known online Kardashian-loather and she had an outstanding response following the launch. Keep reading to find out what she had to say.