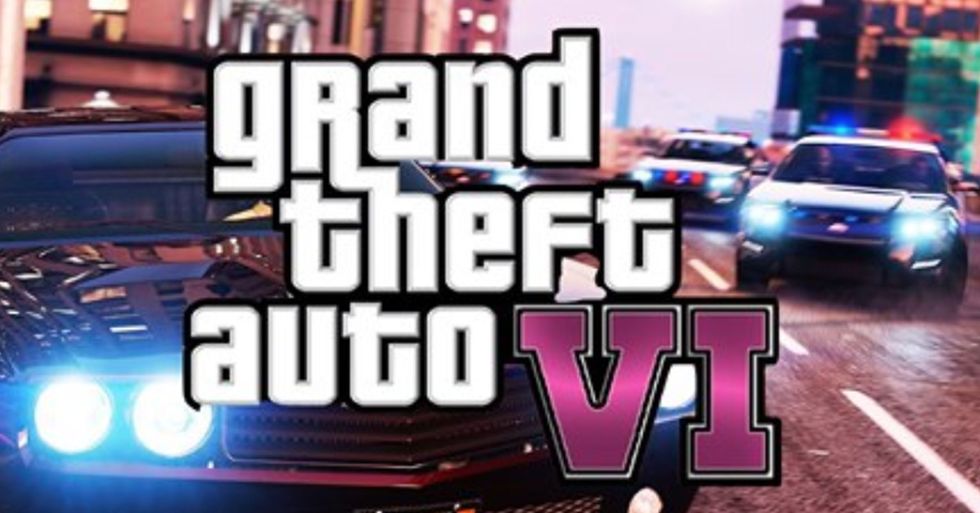 Another day, another Grand Theft Auto VI rumor. But could the game really be announced as early as this week?

I mean we have been waiting a solid 7 years since the last one, it's possible.

2 new rumors have surfaced, suggesting this could be the case. Is this the announcement we have been waiting for?

What would the world be like without Rockstar Games?

Monotonous, and ridiculously more PC are the first things to come to mind.

It lets you escape into a virtual life.

Nowhere else can you use firearms or explosives without facing some serious jail time.

The backdrop is set in the fictional city of Los Santos.

Based around Los Angeles and other California coastal cities, the map has many different sections resembling real-life places, which is probably why it is so detailed.

Many places are parodies.

It's the most detailed city in the series.

It offers gamers tons of activities to take part in and places to explore.

Grand Theft Auto V will have been out for 7 years this September!

And to celebrate the possibility of GTA VI, here are the top 10 easter eggs of the game to fill you with nostalgia...

Even after all this time, GTA V still surprises its players.  The city of Los Santos holds many secrets and easter eggs. Even after their discovery, they continue to perplex players. One of the little known UFO sightings out of the three can only be spotted after attaining 100 percent game completion, once you've done that, players have to stand on top of Mount Chiliad, on a cloudy night at 3 am, where the UFO will appear hovering above you.

9. Watch A Movie At The Movie Theatre.

The great thing about GTA V is that you don't have to take part in any of the actual storylines. Every once in a while, you can just enjoy exploring the landmarks. You can even buy tickets to watch a movie. Despite the Marquee not always matching what's playing in the theatre, you can enjoy a couple of short films for hardly any GTA cash.

8. Search For The Ghost Of Mount Gordo.

This ghostly apparition can be spotted quite easily by heading up the mountain, near the peak, and going towards a flat rock between the hours of 23:00-00:00.

You can visit the Playboy Mansion in GTA V, head over at night and youll see topless women scattered around the place http://t.co/Ve8sfyjUqu
— MindBlown (@MindBlown)1381093920.0

As we all know, this is one of GTA V's most happening places. It might look like an ordinary mansion during the day, but just like the real thing, it sure does come alive at night. Everyone is bound to have visited this place at least once.

6. Trigger An Explosion By Calling A Phone Number.

After dialing the number, a controlled explosion goes off, as if releasing a grenade. Oddly, the number you have to dial is rather long. To trigger the explosion, you must dial 1-999-367-3767. Don't try and call the number in real life... trust me, I've tried.

Spotting one of these is a rare sight due to limited production, and sadly the creators didn't make piloting it free to everyone as you have to have the pre-order code. Which is a shame, because steering it does provide hours of fun.

It was discovered that people can, in fact, enter Los Santos Customs by blocking the garage door with a vehicle, which gives players the chance to walk in while other players are customizing their car.

3. Solve The Mystery Of Mount Chiliad.

At the summit of Mount Chiliad, in the cable car station, is where the map can be found. It outlines a series of clues, including a UFO, an egg, and a jet pack. Although the mystery behind Mount Chiliad still remains a myth, there are a few theories explaining it.

By playing the prologue, players can uncover an alien submerged in a frozen river next to a bridge. It's particularly hard to find as if you go too far or take too long, the game will restart the mission. There are rumors you can break the alien out of the ice!

After diving deeper, you can begin to piece together clues to the remnants' origin.

But what about GTA VI?

This isn't the first time we've heard talks of the new game, and as always, the internet is in a state of fervor surrounding the theories for its possible release date.

Although, this should be approached with a lot of skepticism.

Early this week, 2 leaks have come to fans' attention from 4chan and Reddit. Although not the most trustworthy of sources, both have suggested that an official announcement, regarding GTA VI, will be made this week.

"On March 25, 2020, Rockstar Games will officially announce Grand Theft Auto VI on all their social media accounts. The first trailer will drop within the next week after the announcement. Vice City, 1980's. Apparently, there is a way to play cops in the multiplayer mode (aka GTA Online) but I couldn't get too much on that, I'll try to look into it further though."

Although both sources seem rather flaky.

Anyone else think @RockstarGames should do the honourable thing and release GTA VI for all of us stuck at home. It's the least they could do
— Jonny Hannaford (@Jonny Hannaford)1584958469.0

This continues with the Reddit leak added on Sunday, which was removed by moderators within twenty-four hours of being up. This doesn't look too promising as it was removed from a gaming leak on a subreddit about gaming leaks. Luckily, we'll only have to wait a few days to see if the rumors are true. Hang tight, we're all in this together. Keep scrolling to see why GTA San Andreas was voted best PS2 game of all time...
20%

$19.98 $15.98
Buy Now
See More Deals
We hope you find these deals as awesome as we do! Just an FYI: we may receive a share of sales from links on this page