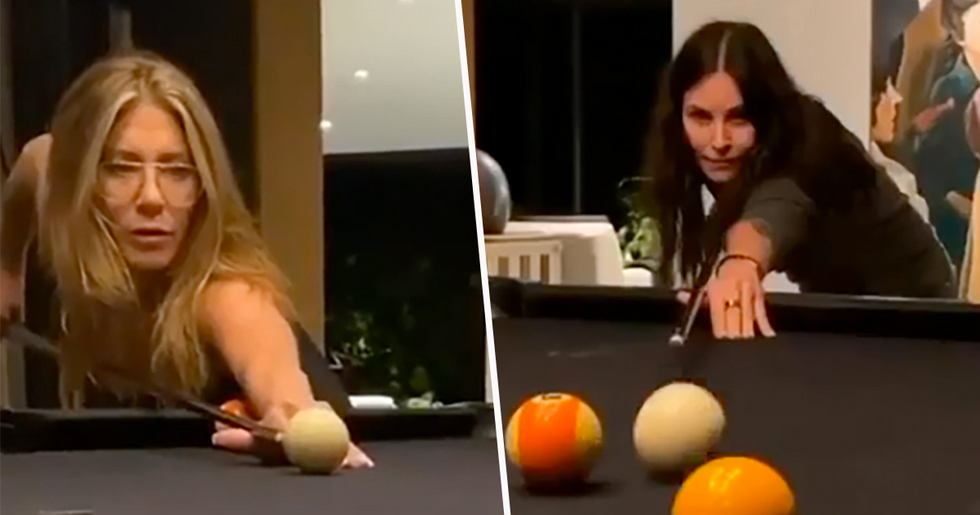 Fans are very excited this week after a mysterious male figure was spotted in the background of Courteney Cox's video of Jennifer Aniston...

Speculation is rife once more.

But, in the background of the comical video...

A rather suspicious figure can be seen.

Now, it is unclear as to who joined the girls in their game of pool...

But, of course, fans have their own ideas.

Could it be Jennifer's old flame, Brad Pitt?!

It's been a rollercoaster of a relationship.

The pair were matched in a true Hollywood style by their agents in 1998, but they kept their romance tightly under wraps for the first year.

But, stepping out together for the first time at the 1999 Emmy Awards, Jen and Brad officially shared their romance with the world.

Only 3 months later, during a Sting concert (of all places), the loved-up couple announced their engagement. Stepping on stage and waving the engagement ring to crowds of applause, it really did seem to be a Hollywood-fairytale.

This Aniston-Pitt privacy stance is perhaps the reason that there remains so much mystery around what the marriage was really like.

In an interview in September 2001, Jennifer had talked about being one year into her marriage with Brad, and things seemed to be going pretty well.

In the interview, the actress divulged how the couple had purchased a $15 million property, liked to bond over music, and may or may not be potheads.

Aniston’s love for Brad was apparent throughout the interview, and she couldn't seem to help but bring him up at any given opportunity.

But, sadly, all good things must come to an end.

We’ve got to that point in the love story of Jennifer Aniston and Brad Pitt that we never want to get to… It’s all downhill from here, guys (or is it?).

It's May 2004, and "happily" married Brad Pitt starts filming the assassin/spy flick alongside the single (and admittedly very beautiful) Angelina Jolie.

Anyway, the 2 co-stars spent an awful lot of time together and got on very well.

Aniston publicly slammed Pitt and Jolie for their insensitivity following the break-up.

Huffpost notes that Jen told Vogue: "I felt those details were a little inappropriate to discuss. That stuff about how she couldn't wait to get to work every day? That was really uncool."

Brad and Jen seem to have reconnected during these difficult times.

The Hollywood Reporter also shared this picture of Brad watching Jen's acceptance speech for Best Female Actor in a Drama Series... And he seemed very proud.

We've been eagerly awaiting acknowledgment from either Brad or Jen...

But the 2 have been stubbornly tight-lipped about the situation - until quite recently.

And now, fresh rumors have arisen.

Last week, Jennifer's Friends co-star, Courteney Cox, shared a video of the pair enjoying a rather disastrous game of pool.

The whole thing is very comical.

It starts by showing Courteney expertly slamming the balls into the pockets...

And then switches to a not-so-expert Jennifer, who seems to be really struggling with the game.

The video is hilarious, and a handful of their friends can be seen standing in the background, laughing everytime Jennifer misses a shot.

But, out of all the ominous figures gathered in the room...

There has been one that has been getting fans very excited.

Some eagle-eyed Twitter users are convinced that they spotted Brad in the background of Courteney's video.

No, this is not a drill.

Guys is this Brad Pitt in the background of Courtney Cox and Jennifer Aniston pool hall video YES OR NO I NEED ANSW… https://t.co/7JO8Jm6gHJ
— Lucy on the Ground (@Lucy on the Ground)1597960645.0

Twitter user, Lucy on the Ground, shared these zoomed-in screenshots, writing: "Guys is this Brad Pitt in the background of Courtney Cox and Jennifer Aniston pool hall video YES OR NO I NEED ANSWERS THANK YOU."

People were quick to weigh in with their expertise...

And many believed it very well could be Brad, especially going by this comparison photo of him in a similar baseball cap.

Some people believe that Brad would never wear a baseball cap like that... You know, like they know him personally.

We may never know the truth...

While Brad Pitt might very well be taking a romantic vacation with a German model, I still remained convinced that… https://t.co/XngXQyngoK
— Lucy on the Ground (@Lucy on the Ground)1598476758.0

But Lucy did report later that Brad was allegedly on a romantic vacation with a German model... Though, personally, I hope that it was simply a cover-up.