Ever since A Star is Born was released, fans have been rooting for Bradley Cooper and Lady Gaga to hook up in real life. | 22 Words 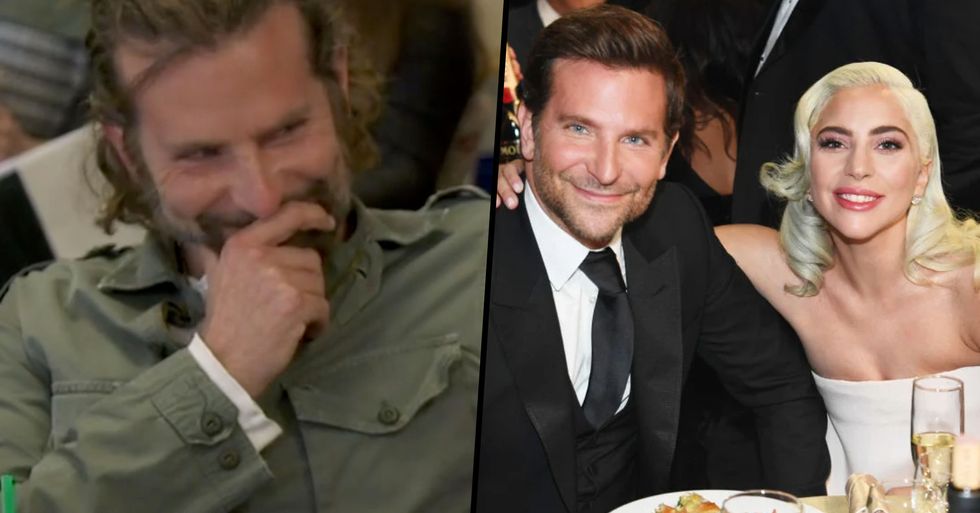 After unseen footage of Lady Gaga and Bradley Cooper emerged online this week, romance rumors have been reignited once again. Only this time, fans think the footage proves the rumors were true.

If you thought the dust had settled on the Lady Gaga and Bradley Cooper romance rumors...

Affair rumours have been reignited this week after unseen footage emerged online.

And it's safe to say, fans have had some strong reactions.

Many think the footage confirms the rumors.

Actor, Bradley Cooper, and singer, Lady Gaga, starred as Ally and Jackson in the third remake of the hit film. If you haven't watched it (seriously, where have you been?), it follows rockstar, Jackson, as he discovers Ally while watching her perform “La Vie En Rose" (ironically, the same way that Cooper met Gaga) in a drag bar.

The pair then develop a truly breathtaking romance...

Having us all invested in their evolving relationship.

Even picking up on how Cooper looked at Gaga during their interviews and press events.

The pair took to the stage at The Oscars in February last year to perform the critically-acclaimed hit "Shallow" from their movie, but it was hard to ignore the chemistry between them. Cooper's girlfriend, Irina Shayk, looked on awkwardly as the pair had what fans are calling a "near kiss" moment.

Twitter well and truly went Gaga after the split.

So many fans seem desperate for a real-life Ally and Jackson get-together.

But, rumours became so intense that Gaga herself was forced to speak out afterwards.

The whole thing was simply a performance.

"We wanted it to go through through the lens of the camera and to every television that it was being watched on," Gaga explained. "And we worked hard on it, we worked for days. We mapped the whole thing out — it was orchestrated as a performance."

However, despite Gaga settling the score...

The rumors have once again resurfaced - well over a year since that Oscars performance.

Unseen footage has got fans questioning everything.

With some going as far as to say it "confirms the affair rumors."

Watch the footage below.

For more on Lady Gaga, scroll on to read about how she says she was "ashamed" to hang out with Ariana Grande...