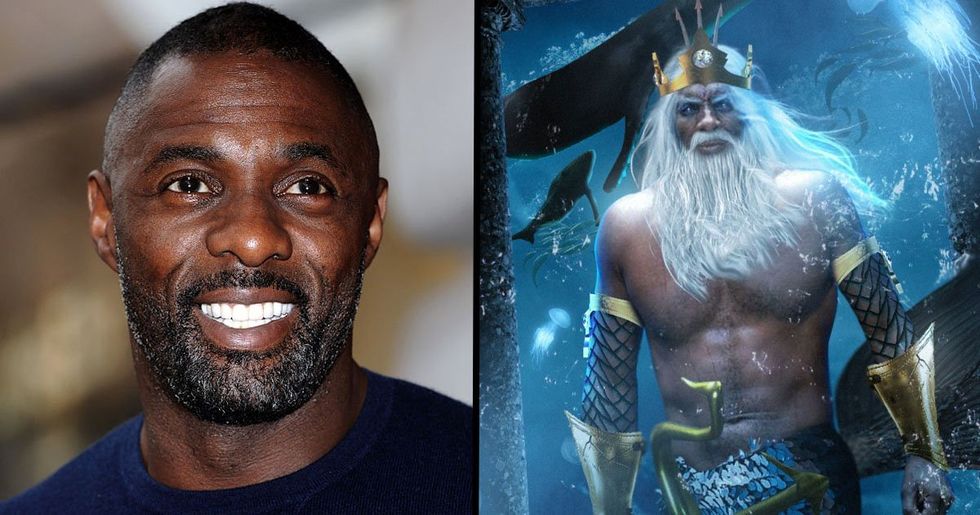 Disney is well and truly in the nostalgia spotlight right now. Not only is its upcoming live-action reboot of The Lion King hitting theatres next week, but the Hollywood studio recently announced that a live-action The Little Mermaid is on the agenda, too.

Casting for the movie is already underway and the film has just found its Ariel, with singer Halle Bailey taking on the role of the mermaid princess. But the choice was met with a wave of backlash.

Now it seems that Terry Crews wants in on the movie, putting himself forward to play Ariel's father, King Triton, by posting a hilarious picture to his Instagram.

His comical plea to Disney has provoked some pretty funny responses too, with the internet determined to make it a reality.

But he's not the only one with his name being thrown around for Triton. Fans also want Idris Elba.

Casting for the long-anticipated The Little Mermaid remake is officially underway.

Disney seems eager to revive many of their old classics, announcing that The Little Mermaid was getting the live-action treatment 3 years ago.

The production actually has some A-list names attached to it.

In the 3 years since the original announcement, fans have been anxiously waiting to see which celebs will be featuring in the movie. Melissa McCarthy is rumored to be taking on the role of the iconic antihero, Ursula, with Jacob Tremblay and Awkwafina also said to be in the line-up.

Although there's one role that we were desperate to hear about.

Fans were eager to find out who would be taking on the role of Ariel. Disney finally answered our prayers last week and announced that singer, Halle Bailey, was cast as the mermaid princess.

The nineteen-year-old was said to be perfect for the role.

With the reboot said to include many of the original songs, the singer, who's the younger half of the sibling singing duo "ChloexHalle," seems to be the ideal fit for the mermaid. Director, Rob Marshall, complimented the star, saying that she “possesses that rare combination of spirit, heart, youth, innocence, and substance – plus a glorious singing voice."

The nineteen-year-old singer was understandably thrilled to be cast.

Although many people were pleased for her...

After landing what will be the biggest role of her career, fans congratulated her on the news and praised Disney for casting a young, black actress as the princess.

Others weren't so kind.

The singer received a wave of hateful, racist backlash following the news, with people trying to claim that a black actress couldn't play the character. Within hours, the hashtag #NotMyAriel began popping up everywhere on Twitter and even started trending in the UK, in a cruel rejection to the teen being cast as the mermaid.

Actor, Todrick Hall, was amongst the famous faces who hit back at the "racists."

In an Instagram post, the star explained that "it was problematic for every single Disney princess to be white to begin with, but when Aurora, Snow White & Cinderella were created we were still having to eat in separate parts of restaurants."

But the support from fans coming to the defense of the star outshined the negatives.

No other explanation as to why anyone would have issue with #HalleBailey playing The Little Mermaid other than raci… https://t.co/ja18MygOng
— Etan Thomas (@Etan Thomas)1562339005.0

Despite Twitter being flooded with backlash, numerous outraged fans took to the platform to praise the teen and to express their excitement at seeing her on the big screen.

But Disney was quick to settle the score.

Disney's "Freeform" hit back at critics on Saturday in a lengthy Instagram post appropriately captioned: "An open letter to the Poor, Unfortunate Souls."

And just days after the influx of backlash, it seems that another actor wants in on the movie.

The negative reactions haven't phased this star, who is all on board with the casting.

The Brooklyn Nine-Nine star posted a hilarious picture on Instagram in a bid to get in on the movie, fancying his chances at taking on the role of Ariel's father, King Triton.

The actor photoshopped an image of himself with a tail in front of Ariel’s castle.

Captioned: "Ariel’s Dad!! HEAR ME OUT!! #ArielsGotTerry #AmericasGotTerry," it seems like Crews is desperate to join Disney's Underwater Kingdom.

And, now, fans are desperate to see Crews make the cut.

Terry Crews as King Triton? We're all for it.

Disney is guaranteed the support of fans if they take on Crews.

Many people appear to be on board, to say the least.

@terrycrews Terry Crews in Little Nermaid would nice. More so if he played every character. None can match him.
— A Ninja (@A Ninja)1562509456.0

According to one fan, the actor is so unbeatable that he should just play every character in the movie.

People began photoshopping the actor into other pictures and the results are suitably funny.

But Crews may have found himself some competition.

Crews might not want to get too comfortable as actor, Idris Elba, is also in the running to play Ariel's dad, as far as some fans are concerned anyway. Let's be honest, either guy wouldn't exactly be a letdown.

Idris seems to be a fan favorite...

The internet has exploded over the idea of Idris playing the role of King Tritan, and can we really blame people?

People are super keen to see Idris on our screens again...

This one user claimed to start a riot if Idris didn't get the part, which is something I most certainly will be taking part in also...

Many people online seem to think that the role is already waiting for Idris. So in the meantime, we'll be waiting patiently just like this...

A huge following has emerged for Idris to be a part of this production...

Despite the ignorance of some, many have come together to praise the Luther actor and express their wishes for him to take on the role of King Tritan.

With production beginning next year, we think that the cast is coming together quite nicely. As for leading star, Halle Bailey, stay tuned, because we've got all the details on how and why she was cast, and why her reaction was nothing less than perfect.