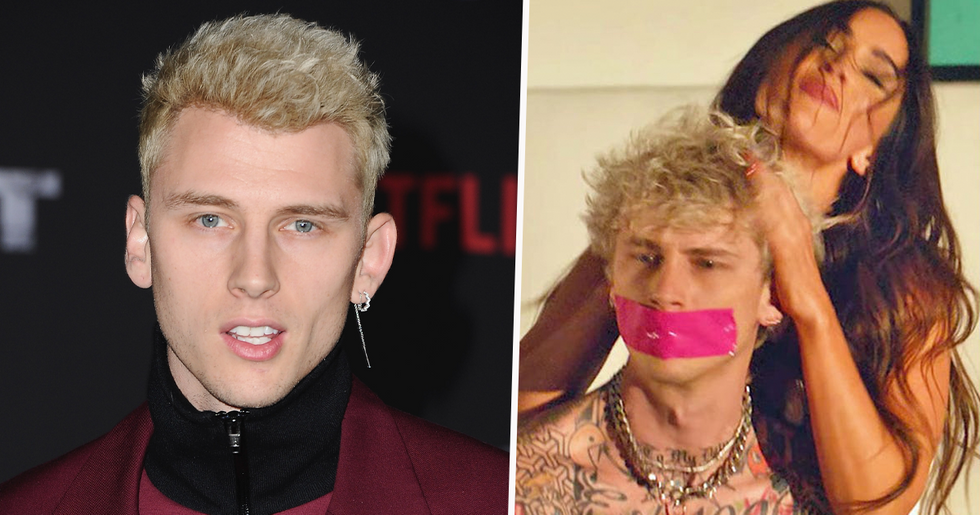 Megan Fox's new romance with Machine Gun Kelly has been causing all kinds of drama...

And now, fans have been left totally weirded out by the model's new beau.

Fox is also known for something else - being super sexy. I mean, she is utterly gorgeous but she has sadly fallen into Hollywood's list of objectified women which she herself has complained about in her youth.

When the pair first met, Fox admitted that she "liked him right away," they seemed to have instant chemistry...

But sadly, it now appears to be the end of the road for the 'childhood' sweethearts...

Brian Austin Green confirmed a few weeks ago that the couple of over 10 years had finally called it quits.

And he also spoke about someone new on the scene...

That's right. Machine Gun Kelly. He revealed that “she met this guy, Colson, on set … I’ve never met him … Megan and I have talked about him. They’re just friends at this point." Or are they?

“I trust her judgment, she’s always had really good judgment," he said adding, “I don’t want people to think her or he are villains or that I was a victim in any way."

Fox and Colson have previously been spotted getting chummy in a car amid the breakup of Fox and Green's marriage. It was speculated that the pair were “staying in separate homes" during the pandemic.

But even though their label was not official, the rumors continued to flourish.

There is no way that these two are "just friends" and we have new evidence to prove it.

And boy did it spark a commotion. Not only were they spending a lot of time together outside of work, it seems as though the 2 may be planning to let the world know that they are exclusive.

We just can't seem to handle the news.

Twitter exploded with comments and reactions, most of them just parallelling the thoughts above.

In the video, you can see the two getting pretty intimate.

Titled "Bloody Valentine", it consists of everything you would probably want it to, from aesthetic visuals to partial nudity.

And now it seems like our suspicions have been confirmed.

In pictures obtained by MailOnline, the pair can be seen getting into Kelly's convertible Cadillac Eldorado, where they were pictured kissing in the front seats. Looks like that's the deal sealed then!

Of course, it's very early days for the couple...

So we won't be jumping to conclusions any time soon!

But it seems that Kelly is eager to share some intimate details about his new relationship...

And it hasn't sat well with fans, at all.

He appeared on a virtual interview with Teen Vogue recently...

And he spoke about his new music video that features his new love interest.

Yep, you read that correctly - her feet. "It's no secret. I think feet are beautiful," he said on Monday, "And I think Megan has the most beautiful feet that exist."

He admitted to asking Megan to highlight her feet for the video with a cameo...

"I was like, 'Megan, you already know what I'm about to ask you.' And she was like, 'Yea, I literally got a pedicure just 'cause I knew you were gonna ask me that'," he explained.

It seems that Kelly isn't ashamed of his foot fetish...

But fans aren't exactly impressed with learning this intimate information.

It's clear that many are creeped out by Kelly's little fetish...

And it's also clear that there's a stigma around foot fetishes.

Are they really that bad?

Each to their own, we suppose!

And keep on reading to hear about the most recent updates in Miley Cyrus and Liam Hemsworth's divorce...