This photograph says it all: | 22 Words 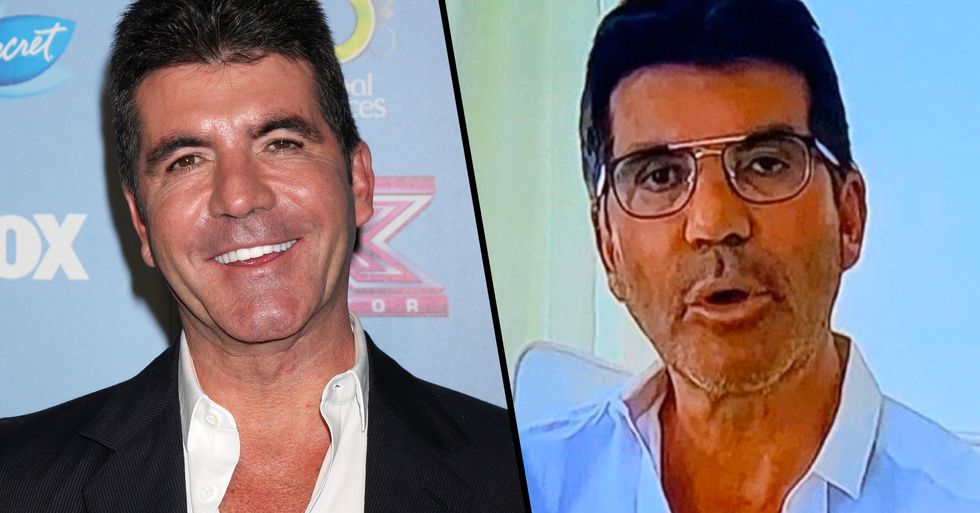 We understand that for people in Hollywood, there's a lot of pressure to look a certain way. With your entire appearance constantly scrutinized by the public, it can be easy to cave into societal pressures. But, sometimes, trying to look "good for your age" can actually look, well, horrible. And the latest celeb to fall victim to this phenomenon? Talent show villain, Simon Cowell.

He's always been partial to the odd cosmetic procedure (just check out his Day-Glo teeth), but after going even further with his transformation, he subsequently left people completely baffled by his bizarre new look.

Keep scrolling to see the latest pictures of the TV judge in all his plastic glory...

But recent images have surfaced of Simon Cowell looking, quite frankly, terrifying - and the internet is absolutely obsessed with his transformation because it keeps on getting worse and worse...

And, as you'd expect, there have previously been some excellent reactions.

Many are trying to figure out exactly what he was going for when he went initially under the knife in 2019. Because if it was to look like a surrealist piece of art, he's succeeded perfectly.

It was not the work of God, I'll tell you that for sure.

But after letting us know why he has had such a dramatic appearance change, fans have turned their delight into worry.

Hey, I know everyone goes through that mid-life crisis when they want to change up their entire lifestyle, but I feel like Simon Cowell as taken it all a bit too far as you'll see if you keep scrolling...

It's all thanks to this new "vegan diet."

Switching to the vegan way of life apparently helped Cowell live a better life and the after-effects involved losing almost twenty pounds. Wow, it seems like he got a 2-for-1 deal there.

Smoking. Even after introducing his new diet, the business mogul continued to puff as many cigarettes as he could.

Speaking to Ellen Degeneres last year, he admitted he went to see a doctor that set him straight. "He [the doctor] said, 'You have the worst diet I've ever met from any patient. So I went, 'Okay, out of the smoking, the drinking, and diet, what do I have to drop?' And he said, 'The diet.'"

Right, so you got our hopes up saying that it was all down to the vegan diet. Now you're saying I also need a facelift on top of that? No thank you! And he's not the only one...

He also said that Amanda Holden went a little overboard with the botox...

"You know, the old clips of us are hysterical, Amanda's always like, 'What was I thinking?', I said, 'Well, I don't look a lot better.' I look all right now, but certain years it was like, 'Wow, I don't know what was going on.'"

The two of them recently appeared side by side during the latest installment of Britain's Got Talent.

Don't think I'll ever get bored of people being bitchy about the state of Simon Cowell's self-inflicted face
— Matty (@Matty)1586704662.0

And with their new appearances, came new comments.

People took to social media to express their utter shock.

This user asked, "what happened to his face?"

Others compared his facelift to Sharon Osbourne's.

To be honest, she does look pretty good right now.

And this user was left totally confused by Simon's new face...

When you see the photograph, you'll understand why...

A lot of people were worried about his health...

Simon Cowell just does not look right at all, Christ, if it is the Vegan Diet, it is not a good advert, he looks seriously unwell :(
— Jools Cockayne (@Jools Cockayne)1586631915.0

This photograph says it all:

We can only hope he's as healthy as he claims he is. If you're looking for another celebrity transformation, then keep scrolling to see what Rebel Wilson looks like now... Prepare to be amazed.