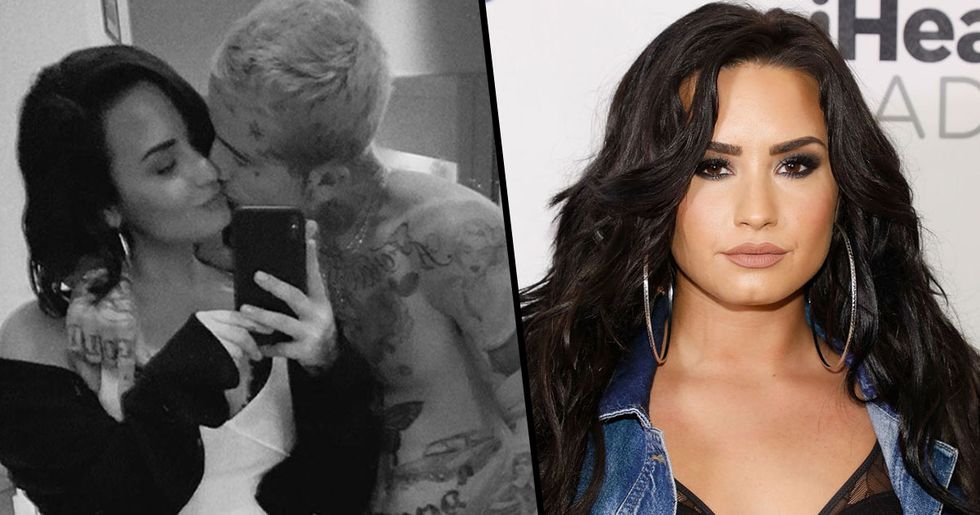 With social media being as influential as it is in our lives, it's hard to get away from the "perfect" standards that it sets for an insecure society. We seem to be wired to take everything we see at face value, without thinking about it rationally. Skin physically can't look that smooth. Hair cannot be that shiny. And bodies should not be able to bend in that manner.

Recently, singing sensation, Demi Lovato, gave us a taste of just how toxic editing pictures can be for your own self-esteem, as well as highlighting the hardships she's endured due to this pressure.

But after she announced the new man in her life, fans are seriously worried about her wellbeing. Keep scrolling to learn more...

Lovato, who is twenty-seven-years-old, is best known for singles such as "Don't Forget", "Here We Go Again", and "Tell Me You Love Me."

And just as any normal person can relate, she has suffered with self-esteem issues and depression for a long time.

Remember when she posted about how insecure she was about her "beach body?"

You'd never know by her carefree smile and beach-living that she's constantly battling her own insecurity. "So, I’m insecure about my legs in this picture but I’m posting it because I look so happy and this year I’ve decided I’m letting go of my perfectionism and embracing freedom from self-criticism," Lovato wrote.

"Learning to love my body the way it is is challenging but life-changing," Lovato continued. "Giving up my eating disorder has been the most challenging journey of my life but I work every day towards solid recovery even if I mess up sometimes."

Two years ago, Lovato released the YouTube documentary, Simply Complicated.  The film followed her life and she spoke very candidly about her past drug addiction and battle with her weight and taking control of her life.

Lovato had previously been sober for nearly six years, though her battle with an eating disorder is ongoing.

"Food is still the biggest challenge in my life," she said in the film, after she admitted to recently relapsing and purging. Her vulnerability and honesty are perhaps why fans feel so connected to Lovato. Anyone who has ever gone through darkness in their life can relate to Lovato's own journey.

"I get envious towards people who don’t struggle with an eating disorder because I think my life would be so much easier." Eating disorders are crippling for even the strongest of people. This is why Lovato is open about her own, so her fans know they are not alone.

In the documentary, Lovato says, "The food came first, when I was 8 years old and my little sister was born, a lot of the attention was taken off me and onto my little sister."

"When I was in a relationship, I went three years without purging and when we broke up that’s one of the first things I did," she says in the film. "The less I have to think about food, the easier it is to go about having a normal life and I don’t want to let anybody down so when I do have moments when I slip up, I feel very ashamed. What started the relapse was missing Wilmer. And when I feel lonely my heart feels hungry and I end up binging."

Lovato came clean with everyone when she admitted that she has secretly been editing photos of herself wearing bikinis before she uploads them.

The Disney star, who has seventy-three million followers on her Instagram had some home truths to share.

She started the post by writing: "This is my biggest fear."

Lovato revealed that the biggest downfall for her body confidence came down to one thing...

Cellulite. It's natural and we all have it. Whether it's on our legs, our ass cheeks, our bingo wings, doesn't matter. It's there.

But, as natural as it may be, society has made us fear it.

Growing up as a female is difficult, primarily due to the unattainable beauty standards set by society. Countless nights are spent shaving stubble from legs, plucking eyebrows, and investing in make-up.

All of that work for what?

So that someone can say that you look beautiful because you now look like one of those scary, hairless cats? As we grow older, we understand better, that beauty doesn't come from smooth legs or blended eyeshadow, it comes from within.

And that's exactly the message that Lovato was trying to promote with this post.

She wrote: "I’m just literally sooooo tired of being ashamed of my body, editing it (yes the other bikini pics were edited - and I hate that I did that but it’s the truth) so that others think I’m their idea of what beautiful is, but it’s just not me."

Fans couldn't help but gush over her raw and confident caption. You go, girl!

Demi's fan base is fiercely loyal...

Demi posted a loved-up selfie with her new man on Instagram...

This new man is Austin Wilson, a Los-Angeles based model.

The pair appear to be very smitten with one another...

And Wilson appears to be making her very happy, which is all that matters... right?

A lot of her fans don't seem to agree.

Many believe that Lovato's involvement with the model will negatively affect the sobriety journey that she has been on since her nearly-fatal drug-overdose last year.

It is assumed that Wilson has used drugs in the past...

Fans have left comments such as, "If she is trying to avoid the drug life, I don’t think this is how you do it," and "You already know she’s going back to drugs after dating this guy."

The fact that he has tattoos is also a concern...

One fan commented, "Dating a guy with tattoos all over his face, you’re soo much better than that Demi."

The tattoos are completely irrelevant...

The mere fact that this man is covered in tattoos should not at all be a reason for somebody not to date him, we must say.

Another commenter said that Austin “smokes" in his photos on Instagram...

And they went on to imply that Lovato had "downgraded" since her ex-boyfriend, Mike Johnson. "This can’t be the Christian and sober guy she’s looking for," they wrote. “She seemed better with Mike." At the end of the day, if this man is making her happy, we should all be happy for them. We can only hope that her journey of sobriety has given her the strength to resist temptation.