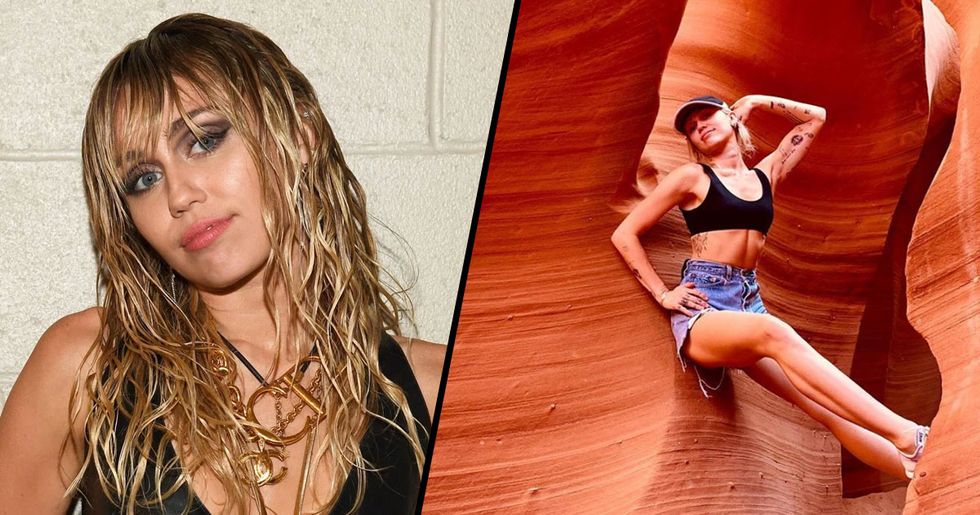 Miley Cyrus has certainly had a rocky summer - from playing the biggest concert of her career to breaking up with her husband... highs and lows, right? It's no wonder she's been posting so many mountain-related posts on her Instagram.

If there's one thing that Miley has probably taken from Summer 2019, it's that life really is a climb. Sadly for the "Wrecking Ball" hitmaker, her journey doesn't seem to be reaching an incline yet.

Over the past couple of days, Miley fans have grown increasingly worried about the star as recent photos have emerged that have made people question Cyrus' wellbeing.

Continue scrolling to see what's up...

Miley's last performance was at the iHeart Radio Festival.

It seems like this picture was taken just before her knockout performance, when Miley impressed fans with a selection of her classic hits from the Bangerz album as well as new numbers, like her hit single "Mother's Daughter" and the popular track from her appearance in Black Mirror, "On a Roll."

Miley has been killing it this festival season.

Perhaps her best performance of the summer was when she played to a crowd of over one-hundred-thousand people on the legendary Pyramid Stage at Glastonbury. Many considered this live performance to be a "career-defining" moment for the singer.

It seemed as though Miley was going from strength to strength.

She proved during her iHeartRadio performance that she has mastered her live performance skills. The success of her recent live appearances has had fans wondering whether Miley would be announcing a tour soon.

Miley has been looking to her mom for support.

In recent interviews, Miley has made no secret of the fact that her mom has been her rock during this emotional period. Miley has always had her mom on hand but after the turbulence of the last couple of months, she has needed her more than ever. .

Miley Cyrus can't seem to go anywhere without being accosted by her legion of fans. Cyrus normally doesn't seem to mind so much, she loves her fans. Not all of her supporters are appreciated though. The singer notoriously has to battle against a sea of creepier fans.

Take this guy, for instance. He's been harassing Cyrus' Twitter, asking to be her sugar daddy. I mean, come on, in what reality would Miley Cyrus need you to give her money?

In the badass collab between Lana Del Ray, Ariana Grande, and Miley titled "Don't Call Me Angel," the three women reclaim their sexuality and power, singing "Uh, I make my money, and I write the checks / So say my name with a little respect."

You can easily miss it, but if you look closely, Miley Cyrus gets an alarming amount of creepy messages from middle-aged white guys on Twitter. The Johns, Kenneths, and Ronnies of this world seem to think that they have some kind of special connection with the stunning hitmaker.

The messages from these obsessive fans are not just creepy, they show signs of a seriously possessive nature. From the way they talk to the singer, you would think that they actually knew her on some deep, profound level.

What're you going on about?

Some of the messages from middle-aged men that Miley receives (that was a bit of a mouthful...) really are just totally bizarre! This dude has what seems like a full-blown conversation with the singer. He even tries to make her jealous by saying that, if he sat next to anyone else at her concert, they would try to get with him... I mean, this message isn't threatening exactly - if anything it's just sad.

How is Miley supposed to deal with fans like this?

Colin McCoid, from East Yorkshire, got twenty-nine tattoos dedicated to Miley Cyrus. That's right, a forty-two-year-old dad of two got twenty-nine tattoos that had something to do with the former Hannah Montana actress. Eighteen of the tats are carefully sketched portraits of her face. He admitted to a Daily Mail reporter: "I got my first tattoo of Miley after I was divorced in 2010, but it got to the point where it was getting obsessive."

Obsessive is the right word...

Miley Cyrus made it clear that she didn't like the fact that Colin had tattoos of her all over his body. The singer joked about it on a talk show saying: "There's a dude that holds a record of the most pictures of my face, he has like eighteen pictures of my face and they're really ugly." As much as Cyrus can laugh about it, naturally, she probably found it pretty creepy, too. The singer ended up having to block Colin on Twitter to stop him from harassing her.

The madness within the Cryus franchise must affect the singer's mental health.

Every time Miley releases another brilliant piece of music, her fanbase increases. That being said, some of her intimate performance confuse fans into thinking they have a deep personal connection with the star. Take "Wrecking Ball" for instance... Miley bares all in that track and gives an emotionally raw performance. But, saying that, she's not singing "I will always want you," to Ronnie, Kenneth, and the dude with tattoos of her face all over his body.

She's singing about someone she actually does love.

Anyone that confuses themselves for Miley's long-time love, Liam Hemsworth, when listening to "Wrecking Ball" should probably go to see a doctor. As much as Miley cares about her fans, just like anyone, she has her own, private, personal intimate relationships with people that actually know her. The rupturing of Miley and Liam's relationship this summer is going to take her some time to process.

How can Miley process when she never has time alone?

When you go through a break-up, you need space. Sometimes you just want to hide from the world, curl up in a ball, and eat cookie dough. Even if Miley rocked up to a 7-11, eyes puffy from crying, wanting to buy snacks, she'd probably come home to find the outing written about all over the internet.

Remember when Liam went for fro-yo?

A few days after the couple announced their split, Liam was photographed looking real sad at a frozen yogurt establishment. Twitter user, Claire, wasn't the only person wondering whether Liam was okay. The photos caused a total media storm.

Is there anywhere Miley can go to have a good cry?

Miley can't go anywhere without being papped. This must have been especially difficult over the last couple of months - piecing your life back together after a break up is never easy. Miley has had to do that completely in the public eye. It's little wonder that she's been looking a little worse for wear recently. No wonder people are now voicing their concerns.

With some members of the Cyrus clan coming to the show to support her, it's no surprise that the star decided that it would be the perfect opportunity to take a much-needed break afterwards.

This summer, Miley has been pictured next to mountains quite a few times. It seems like the singer feels some sort of affinity towards this rocky terrain.

Miley got to spend some quality time with her pup.

Taking a break from the demands of being one of the most successful artists of the minute, Cyrus took some downtime with her family. Along with her mom, Miley vacationed with her older sister, Brandi, and her pooch, Bean - who also sometimes gets called "Burrito." (Aw!)

What's everyone worried about?

This picture has caused the most controversy.

Frankly, this dude sounds very much like those creepy middle-aged fans I was talking about earlier. If he was the only one saying anything, I'd be tempted to say that the concern was completely unfounded. That being said, he is actually one of many fans to have voiced their worry.

A self-professed "Smiler" announced that she was worried.

Commenting on how skinny Miley has looked in her recent posts, some of her young "Smilers" are concerned that she's not eating.

Has she lost control?

One Twitter user considers that the recent photos of the star looking particularly slim are a sign that she has lost control.

Not everyone thinks that Miley is struggling, though.

One Twitter user defended the star's pictures. Amber argues that, just because her ribs are showing, it doesn't mean that she is an unhealthy weight. I guess I can't deny her point that we all do indeed have ribs...

Another Twitter user slams rhe growing concern for Miley's health. Cameron argues that anyone commenting on Miley's weight is body shaming the star. Perhaps people really should stop scrutinizing everything Miley does...

What's next? With fall approaching, will everyone be calling out Cyrus for wearing too many layers? Perhaps there will be people making comments about the number of photos of her indoors!

In this one, she looks too purple!

I mean, what's she playing at? What does it mean? Should we be worried? Maybe the Cyrus fan community just needs to take a chill pill and let Miley be. I'm sure she's doing just fine. Miley's had enough battles for one year. Continue scrolling to read about the time that Brody Jenny tried to rip her on Instagram. Don't worry, Miley sure showed him not to try to mess with her...