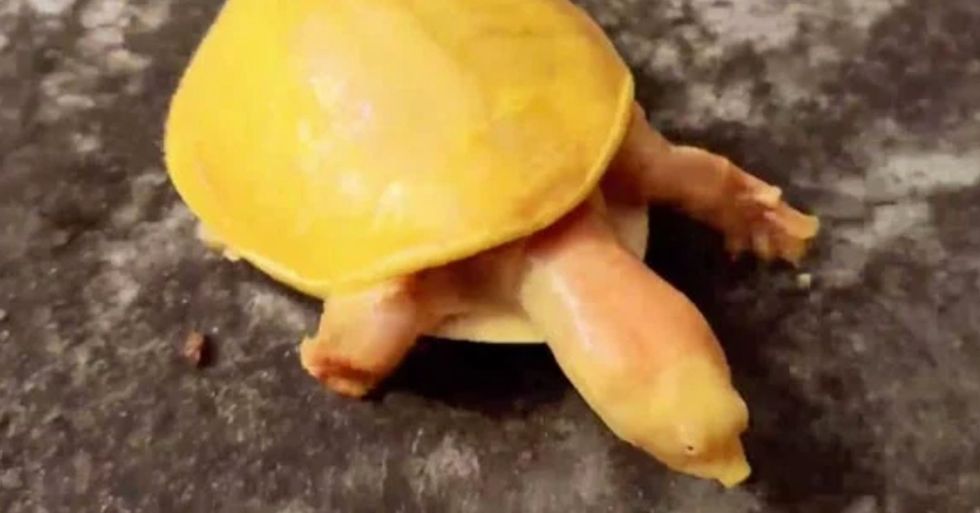 A farmer in India has discovered a rare yellow turtle that has never been seen before and it is the most unusual thing...

Turtles are the most precious animals in the ocean.

These adorable reptiles can be found in many regions of the world and they're known for their gentle and placid natures.

The numbers of sea turtles have been dwindling over the years.

This is all thanks to the actions of us humans.

Factors such as global warming and pollution have contributed to the decline of sea turtles and it is truly devastating to witness.

Each year, billions of pounds of trash enter the ocean.

Some of the debris ends up on our beaches, washed in with the waves and tides. Some debris sinks, some is eaten by marine animals that mistake it for food, and some accumulate in ocean gyres.

This has been caused by years of littering and dumping...

Our wildlife deserves better than this...

And it's turtles in particular who have suffered from human impact.

Plastic is the biggest killer of turtles...

According to SeeTurtles.org, turtles often confuse plastic bags for jellyfish - which is their favorite food. Once the turtle has swallowed the plastic bag, it will get stuck in their stomach which will cause a slow and painful death.

And as for the trash and plastic dumped on beaches...

Turtles often have to crawl through layers and layers of rubbish in order to nest which results in them getting caught or injured amongst the debris. This also makes it almost impossible for their hatchlings to make it to the ocean safely.

Even though efforts have been made over the years to try and reduce the volume of rubbish entering the oceans and beaches...

Turtles have been the ones to continuously suffer.

It is utterly devastating to see these beautiful creatures dwindle...

And we can only hope that more and more people will soon wake up and see what their littering habits are doing to our planet.

Even though things have been devastating for sea turtles...

The global pandemic has kept millions of people inside their homes for the last few months...

And amazingly, our wildlife has been doing better than ever - including hundreds of thousands of baby sea turtles hatching and making it into oceans all around the world safely.

And what's even better than that?

Well, the discovery of a new species is always exciting!

A farmer in eastern India recently came across an unusual-looking turtle...

And it's nothing that we've ever seen before!

Basudev Mahapatra spotted the turtle last week while he was working in his fields in the village of Sujanpur, in Odisha's Balasore district...

And when he decided to take it home and take a photo of it, the exotic-looking creature went viral online.

He handed the turtle over to forest officials, who called in conservation experts.

Siddhartha Pati, executive director at the Association for Biodiversity Conservation, which works to protect wildlife and habitats, told CNN it was the first time he had seen this kind of turtle.

It turns out that the turtle's yellow coloring is due to albinism.

"It is a congenital disorder and it is characterized by complete or partial absence of tyrosine pigment," he said. "Also, sometimes a mutation takes place in the gene sequence or there is a deficiency of tyrosine."

It was soon identified as an Indian flapshell turtle...

A farmer found a yellow turtle while working in the fields in eastern India. Experts say its color is the product o… https://t.co/dZ4f7v0pPd
— The Viral Cuts (@The Viral Cuts)1595834613.0

And the little guy was released back into the ocean shortly afterward.

People are fascinated, to say the least...

And many weren't aware that albino turtles even existed.

And one Twitter user pointed out that there are more albino animals than we thought...

Including these Indian bullfrogs!

Keep on reading to learn about the amazing impact that the pandemic has had on the reproduction of these beautiful creatures...