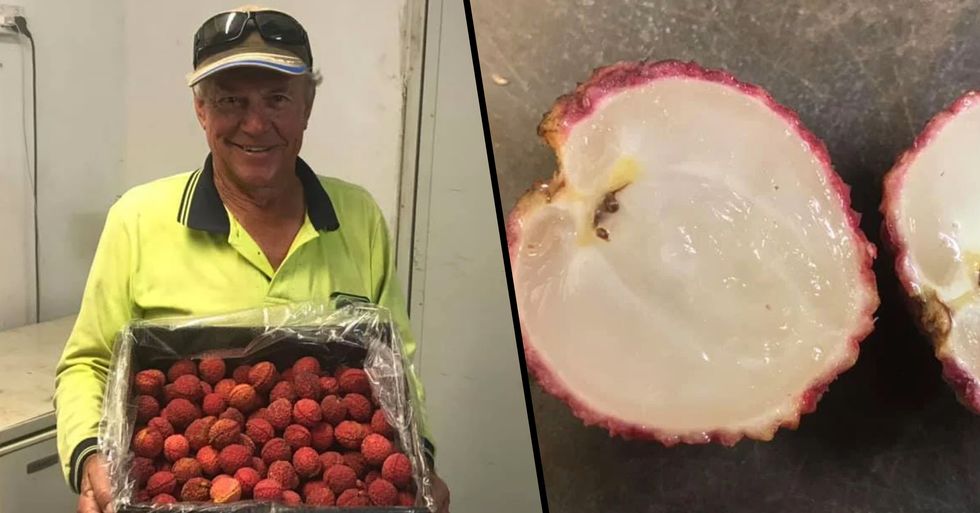 Fruit is just magical, isn't it? Delicious little bites of healthy food that grow out of the ground - it almost sounds like something out of a fantasy novel. But for many of us, fruit has one persistent and annoying downside. It's filled with unappetizing (and irritatingly fiddly) seeds.

But one farmer from North Queensland has decided to take a stand. After twenty years of hard work, Tibby Dixon has managed to successfully breed seedless lychees. Want to learn how? Scroll on.

Let's face it, snacking is the best.

But as the new year rolls around, many of us have one resolution.

Taking care of our health is a popular goal - and eating right is an important part of that.

Luckily for us, fruit exists!

We should all be eating more fruit.

But for many of us, there's one major downside to this healthy snack.

The problem with natural produce is it isn't designed to be perfect for human consumption.

And there's one fruit which is a major culprit.

Lychees - in spite of being delicious (and wonderfully weird-looking) are annoyingly seed-y.

These rosy-flavored fruits have just one flaw.

Underneath the tasty white flesh lies a large and obtrusive seed - slowing down the eating process.

Because some news has surfaced this week that has got lychee-fans really excited.

Dixon has managed to breed lychees without those annoying seeds. Here's (a very simplified explanation as to) how.

It's been a long road for Dixon.

And his dream of creating a seedless lychee variety has been twenty years in the making.

He propagated the variety from one single tree.

The tree was imported from China, and Dixon is now selling the young plants to other lychee growers.

It's kind of strange to see this fruit without the signature large and obtrusive seed!

"The cultivar itself is a medium-sized fruit, no seed, very flavorsome," says Dixon.

"To me, it actually tastes like it has a bit of pineapple in it — that's what my tastebuds tell me. It's very different to all the other cultivars we have."

And although the lychee is for sale ...

Dixon is focusing more on cultivating the trees, which will, in turn, lead to more of these seedless fruits.

So, how did Dixon do it?

It takes a lot of time and skill - and Dixon uses both selective breeding and cross-pollination to achieve his goals.

"First of all you have to start off with a really good cultivar, and then you get on with it and you keep cross-pollinating it."

"Hopefully somewhere down the line you can actually get something with a small seed, and from there you cross-pollinate again."

"By chance you might end up with a seedless lychee."

It's finicky work that takes time - but Dixon was dedicated to the task at hand.

Currently, the fruit is still in the developmental stage.

But Dixon is now cultivating a crop of trees that will deliver fruits on a far wider scale.

So seedless lychees could launch sooner than you might think!

"Within a couple of years we should have enough to sell out in commercial numbers," he said. Fancy learning about some more innovative fruit varieties? Read on for the background on some surprisingly controversial black apples.