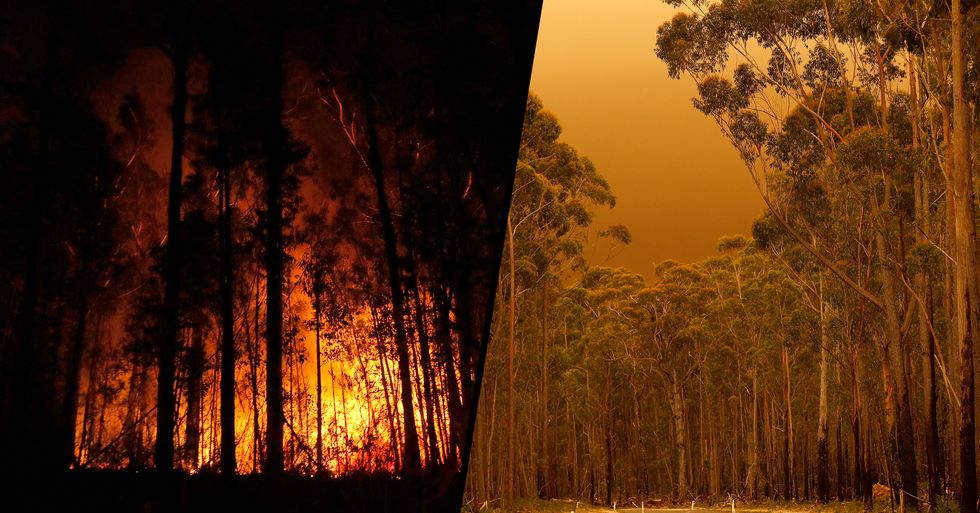 Residents have no doubt seen some petrifying things during this tragedy, but a terrified dairy farmer in Australia has shared a harrowing picture which he claims shows the devil’s face emerging from the fire clouds.

Keep scrolling to see the snap for yourself.

Firefighters all over the country have been tirelessly battling the formidable blazes and are struggling to contain them. Keep scrolling to see the heartbreaking pictures of the aftermath, including the harrowing new snap supposedly showing the devil's face.

There have been some harrowing sights...

But it seems dairy farmer, Craig Calvert, has had a rather unusual claim - that he has spotted the devil's face emerging from fire clouds in a picture. Keep scrolling to see for yourself...

The picture was taken by his friend.

But it was Calvert that made the shocking discovery.

The dairy farmer and his father spent a staggering thirteen hours defending their property from the flames. He then recalled the moment he saw the photo to Sunrise 7 reporters: "you won’t believe it, I don’t believe it."

He admitted he was stunned after noticing the "devil face" and didn't believe it at first...

"I’m not really into hokey pokey spooky stuff but there’s a big devil face right in the fire."

This picture was taken in the Gippsland fires near Sarsfield. The demonic apparition in right hand corner of the bl… https://t.co/FvrGPIAXs8
— David Woiwod (@David Woiwod)1577984308.0

What do you think? Keep scrolling to read about the young son of a volunteer firefighter who was honored for his bravery this week... It's a truly heartbreaking story.