Farmers Are Refusing to Grow These Rare, Expensive Black Apples for a Specific Reason | 22 Words 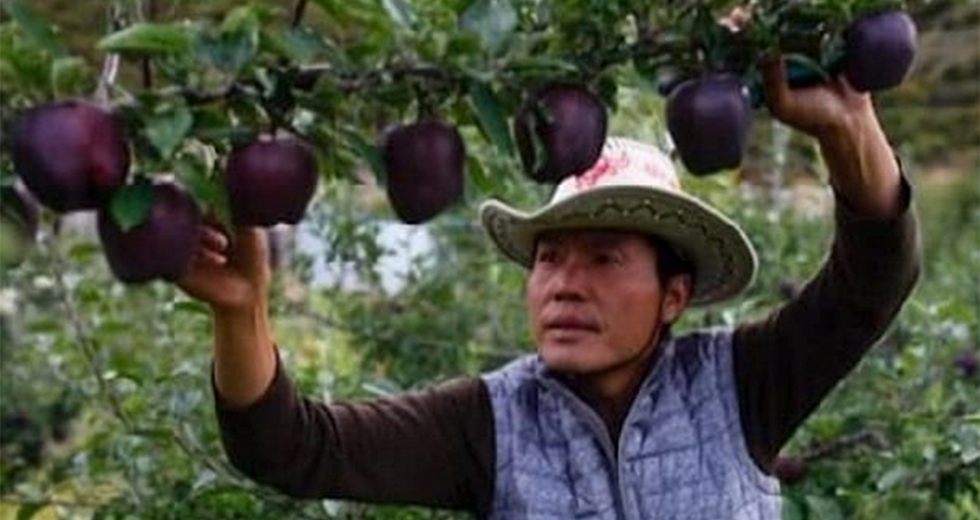 Farmers Are Refusing to Grow These Rare, Expensive Black Apples for a Specific Reason

Apples are easily one of the world’s most ubiquitous fruits. They’re a symbol for classic Americana when baked into a good old fashioned lattice-top pie. There’s no love greater than being the “apple” of someone’s eye. The fruit even has a starring role in one of the most popular books of all time, the Bible.

Despite its controversial guest appearance in the Garden of Eden, the apple has remained insanely popular to this day. From snacks to desserts to a major technology brand, the sweet crispy fruit is still a legendary cultural staple. Yet still, it continues to reinvent itself.

The latest fruit gossip has been dominated by news of a sleek new varietal, the mysterious Black Diamond apple. And while the only black apples I’ve ever seen have been retrieved from the slimy depths of forgotten refrigerator drawer, these Black Diamonds are allegedly in a league of their own. However, you may not ever get a chance to taste these elusive fruits.

There’s more to apples than just simple reds and greens.

An estimated 7,500 varieties of apple can be found across the world, with 2,500 types grown in the United States.

The U.S. is one of a select few countries that grow most of the fruit.

Farmers in the U.S., Poland, Turkey, Italy, and China are responsible for producing a majority of the world’s apple supply.

Varieties can be so different, it’s almost like comparing apples and oranges.

Golden Delicious, Gala, Fuji, Honeycrisp, Granny Smith, Red Delicious, Jazz.... there’s something for everyone looking to keep the doctor away.

They all have their place in the Apple universe.

Any apple aficionado knows different varieties are good for different things. Honeycrisps hold up great in a bagged lunch. Tart Granny Smiths bake down nicely into a pie. And Red Delicious never taste as good as they look.

And it looks absolutely rotten to the core.

But they’re actually a rare, in-demand breed of the fruit.

The unique varietal is unlike any other apple. They gleam with a purple iridescence and thick natural wax that have earned the fruit its “diamond" nickname.

Its appearance isn’t the apple’s only defining feature.

Fans of fruit say the Black Diamond, also known as the “scorpion fruit," is sweeter and crisper than your standard varietal.

That’s because they have higher levels of natural glucose.

The excess organic sugars in the apple make it naturally sweet, and its thick skin gives it a unique richness.

But Black Diamonds weren’t named just for their color.

The scorpion fruit is also nearly impossible to find, adding to its dark, mysterious apple aesthetic.

They can only be grown in very particular conditions.

So far the Black Diamond has only be known to grow in a region around 3,100 meters above sea level in Nyingchi, Tibet.

That elevation sees a drastic range in temperatures.

Nyingchi days see warm temps and tons of sunlight that enable seed growth. At night the region can reach temperature below-freezing, which means the apples must adapt to survive.

The extremes create the perfect environment for Black Diamond apples to shine.

In addition to its temperature range, Nyingchi also gets a lot of ultraviolet light that creates the apple’s dark outer color.

These harsh conditions are nearly impossible to replicate.

The apples aren’t cultivated with special fertilizers or chemicals. It’s all about the location, which means harvest is limited.

They take a toll on farmers. The steep Tibetan mountains that Black Diamonds thrive on aren’t easy to traverse for those tasked with tending the crops.

They really take their time growing, too.

The rough circumstances that make Black Diamonds possible are also what restricts their proliferation. Typical apple trees take about 2-3 years to fully mature, while the scorpion can take up to 8.

Plus, they’ve got a really narrow harvest season.

The apples are usually put on the market near the end of October and are only sold for around two months.

A majority of the harvest never even sees the market.

Black Diamonds must pass a strict quality control test, and only about 30 percent of the apples are deemed worthy for sale.

So, they can really only be produced in Tibet.

But even there, the harvest yields can be small and not typically reliable enough to create a market wide enough to justify an investment.

It’s hardly worth the costs of growth and distribution.

Farms that do harvest the Black Diamond can only sell in restricted quantities and for very high prices.

As their name suggests, Black Diamonds are a luxury.

The fruit is only sold in high-end boutique grocery stores in China, and remotely in pre-order gift packages of only six to eight apples.

So there’s pretty much zero chance of getting one in the states.

While there are varieties similar in color like the Arkansas Black Apple that can be found locally, the real deal is only available in China.

Even if you could get one, it’d cost ya.

A single Black Diamond apple reportedly costs $7. For one apple! You can get a pound of apples in the U.S. for around $2.

Not that the Black Diamond should be relegated to such a common dish. That’s clearly Granny Smith/Fuji blend territory.

So farmers are more inclined to grow what’s going to sell.

A cult following isn’t enough of a market for the expensive apples, so U.S. fruit farmers probably won’t be working on Black Diamond anytime soon.

Don’t be fooled by imposters.

The Pouteria australis, or “black apple," is an Australian fruit that’s as dark as the Black Diamond, but is actually a plum.

The Black Diamond isn’t the only famous black fruit.

The shiny dark rind of the Densuke watermelon has made it a hot item in Japan, where the fruits sell for $6,000 each.

A $7 apple pales in comparison to some of these coveted treats.

If you’re curious about the next best thing in apples, there are some other fun options.

They’re no black diamonds, but one Chinese company makes apples in shapes like hearts, squares, and more to satisfy your every fruit whim.

Are the Black Diamonds a myth?

Some farmers believe that photos tantalizing fruit lovers across the web are nothing more than darkened photo enhancement. Perhaps we’ll never know the truth about the bewildering apple.