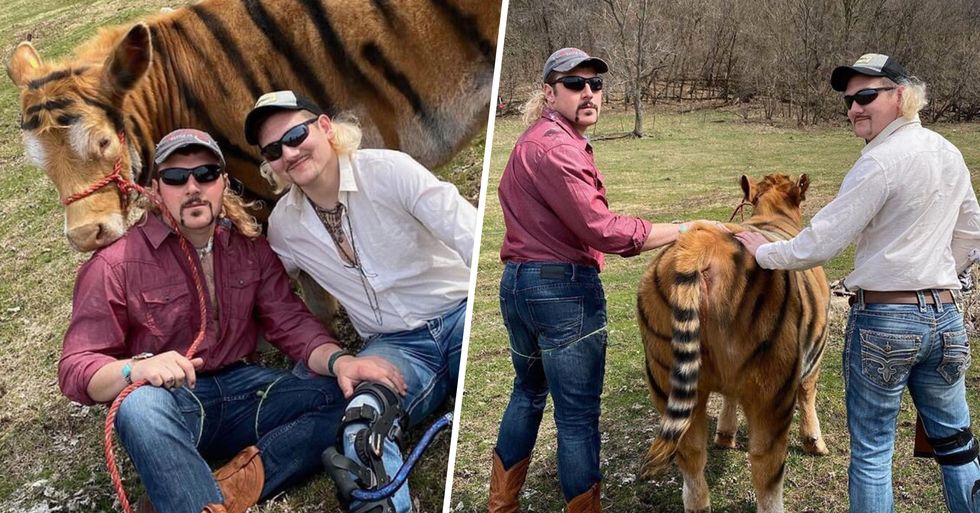 Farmers Paint Their Cow and Stage a 'Tiger King' Photoshoot

It has completely taken over the internet and it's safe to say that people are pretty obsessed with the bizarre series.

Keep scrolling to check out the farmers who painted their cow and staged a Tiger King-themed photoshoot...

Putting the incredible memes aside...

It's safe to say that the entire world has been completely gripped by Tiger King and it already has millions of fans.

And while we wish we could unsee some of them, 2 farmers recently made incredible effort to stage a Joe Exotic-themed photoshoot.

The farmers' identities are currently unknown...

And whilst we are assuming they are from the States, it is also unknown as to where the photoshoot was staged... but it is pretty damn amazing.

Now the resemblance is pretty uncanny...

And we're pretty sure that tiger is a cow!

They've well and truly nailed it...

And a big round of applause to that cow for staying in character throughout the entire thing.

Everything that these guys have done is spot on...

That's from the black sun-glasses, to the leg brace, to those tragic bootcut jeans.

But some people aren't cool with this...

And many have pointed out that they shouldn't be painting their cow... which is something that we also agree with.

But never the less...

A couple of Farmers painted their cow and staged a #TigerKing photo shoot.. This is why the Internet was invented! https://t.co/pGgtOO3WBF
— Jim Sheridan (@Jim Sheridan)1585905314.0

Their effort is undeniable and they've done a pretty good job - let's just hope the paints they used on their cow are non-toxic and non-harmful. Keep scrolling to learn Cardi B's GoFundMe Page for Joe Exotic...