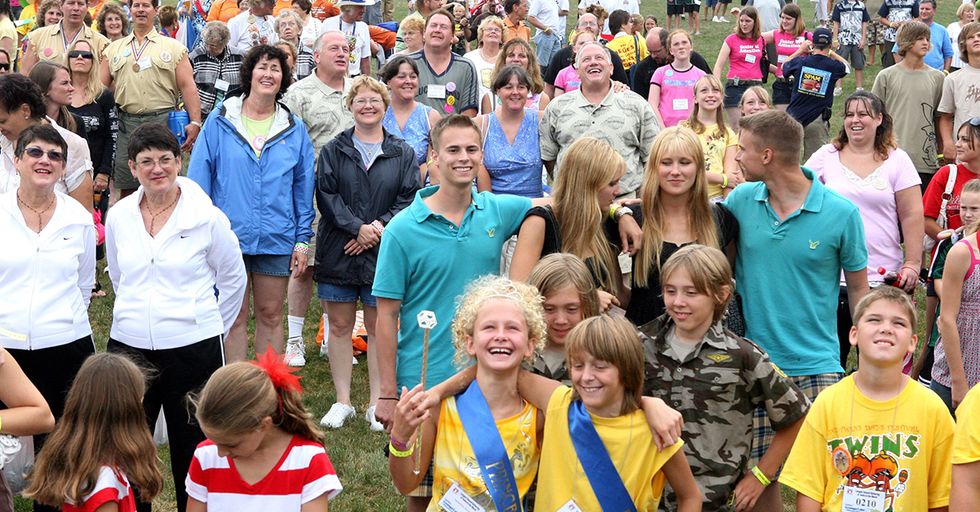 18 Fascinating Facts About Twins That Will Have You Seeing Double

Twins have always been a source of fascination for many people.

Now, with the number of twin births on the rise and more common than ever before, we decided to make a list out of a few things you might not know about them!

From the truth behind "twin talk" to the science behind their conception, here are 18 thought-provoking facts about twins!

Twins can begin interacting with one another as early as 14 weeks into a pregnancy! Researchers in Italy studied the behaviors of twins in the womb; at 18 weeks, the twins touched each other more than themselves. The twins were also noticeably gentle with each other. No wonder twins are said to have that special twin-bond!

Research suggests that about 40 percent of twins invent and speak to each other in their own languages! While it’s most common among twins, these types of languages form between two close siblings as they’re naturally learning whatever real language being spoken around them. Usually, the twin talk dwindles once the pair start school and learn the real language.

Twins can have different dads.

It’s quite rare, but if a woman releases two eggs while ovulating and then is impregnated by two different men in quick succession…viola! A set of twins with different fathers.

Twins can mirror each other.

Roughly a quarter of twins become perfect reflections of each other. Their features develop asymmetrically, with birth marks on opposite sides of their body, or one right and the other left-handed.

Identical twins, while their DNA is 99.9% the same, never have the same fingerprints.

A woman who is herself a fraternal twin is more likely to give birth to fraternal twins. This is also true for women who have previously given birth to twins, or have siblings who are twins—all of these factors increate the likelihood of having twins.

Twins can, in fact, be born weeks or even months apart when complications arise during a pregnancy.

Twins are twice as likely to be left-handed as opposed to single children. About 22% of twins are lefties, compared to only 10% of singletons.

It’s possible to consume your twin before birth.

Due to “Vanishing Twin Syndrome," the number of pregnancies that begin with twins  and those that result in the birth of twins are very different. In some cases of twins being conceived, one of the embryos is absorbed by the other twin, or even the mother’s body.

What a confusing family tree.

If two sets of identical twins married each other, their children would technically be cousins—but genetically speaking, they’d be siblings.

A piece by the New York Times explores the shared thoughts of a pair of conjoined twins named Tatiana and Krista Hogan. Currently, they are the only craniopagus conjoined twins in Canada. They’re connected at the head and can taste and feel what the other does, due to the “neural bridge" that joins them.

Twins living separate lives can also mirror each other.

Through several instances of twins separated from the other at a young age, it has been noted that their lives have striking similarities. Instances of sharing similar thoughts, marrying people with the same name, or entering the same profession have all been noted.

Studies have shown that women who consume dairy are 5 times as likely to give birth to twins and women who don’t.

Twins are the most common result when giving birth for polar bears. Rarely do they have single babies or triplets.

In fact, twins in general are more and more common.

Identical twins are not as common as fraternal.

There’s no genetic predisposition for identical twins; the rate of their birth is universal regardless of genetics. Roughly 1 in 285 births result in identical twins.

There is a genetic predisposition for fraternal twins, which occur from two eggs being released at the time time.