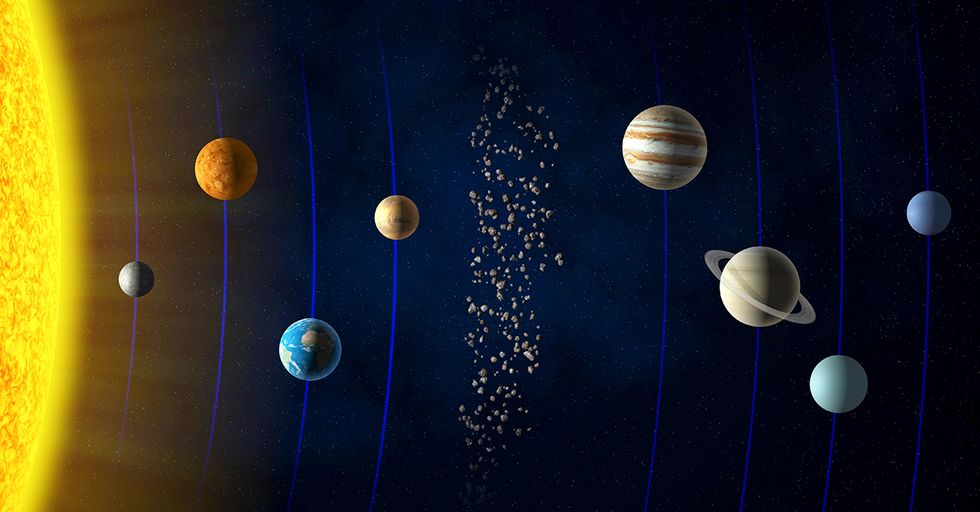 From biology to astronomy to physics, high school is basically an extended lesson on why science is the best subject.

What other class lets you rub balloons on your classmates' heads and drop Mentos in Coke and—when your teacher just isn't in the mood for teaching—watch infinite amounts of Bill Nye?

Science is the sh*t, and we'll fight anyone who says otherwise

Sure, there are all of the formulas and cycles to memorize, but there also Bunsen burners! And goggles! And explosions! If you're still feeling victimized by that C you got in chemistry, these 19 scientific facts are the perfect solution.

A recent study suggests that modern cephalopods are actually the descendants of creatures that arrived on Earth frozen in an icy comet. However, scientists are still unclear on whether the plural of octopus is actually octopuses or octopi.

Our solar system may still have nine planets

Astronomers believe there is a ghost planet is hiding in the depths of the solar system with a mass 10 times the size of Earth, and a recent sighting of a large, orbiting dwarf planet may prove Planet Nine's existence. You've been replaced, Pluto. Sorry.

Prasinohaema in New Guinea have the highest concentration of a green bile pigment recorded for any animal, and that pigment could act as an antioxidant to human malaria parasites. It doesn't hurt that they're also kinda cute (for reptiles, that is).

Desert ants rely on the Earth's magnetic field for orientation

After spending the first weeks of their life in a dark underground nest, desert ants need to get their bearing above ground, and high-speed video recordings show that ants use the Earth's magnetic field as orientation cue. We're impressed, ants, but you're still not welcome at our picnic. This next one still has us shook...

Footprints preserved in fossils show evidence of human tracks following the extinct Pleistocene ground sloth. If scientists could now make a digital rendering of what these giant sloths looked like, it would be appreciated.

Plants "talk" to each other through their roots

Corn seedlings in a crowded environment are believed to secrete chemicals into the soil, advising each other of the proximity of other plants. We wonder what other kinds of secrets they secrete...? (Sorry, we'll stop.)

Sharks and camels produce unusual, diminutive antibodies that are only about half the size of the conventional versions, and these nanobodies can be used for anything from as tracking a key immune protein in the body, to neutralizing plant viruses, and to labeling cancer cells. Sharks and camels are also an unlikely animal friendship we could get behind.

There will soon be a way to transplant a human head

Two surgeons in China are developing a method to transplant the human head to help patients with spinal cord injuries and paralysis, and they already performed successful surgeries on mice, rats and a dog. Black Mirror, get on this.

Based on an analysis of the genomes of 107 different species of mammals, scientists found that nearly all mammal genomes still possess the genes that allowed the ancestors of all mammals to digest insects. Shout out to our ancestors for keeping us humble. Our condolences if this next fact applies to you...

An illness-causing strain of E. coli secretes a protein that latches onto the sugar molecules of type A blood cells, but not type B or O cells. So basically, if you're blood type A and traveling, you're sh*t out of luck.

There may be life on Jupiter

A Nasa probe found evidence of water vapor on Jupiter’s moon Europa, making it a prime candidate for potential alien life. Depending on how the presidential election goes in 2020, we might join them.

It's possible to transplant memories

A team successfully transplanted memories by transferring a form of genetic information called RNA from one snail into another. This also would make for a great Black Mirror episode if it wasn't for the snails.

Researchers found tiny amounts of the illegal substances on 13% of volunteers who took part in a study after declaring they did not take the drugs, and it is believed that the participants became contaminated from banknotes, tables and other surfaces. Does this work for drug tests, too? (Asking for a friend.)

Researchers may have identified a compound that can stop the most common cold virus, the rhinovirus, by targeting a protein in human cells that cold viruses use in order to replicate and conquer the virus. If they could work on curing the common hangover next, that would be great. You might want to sit down for this next one...

Giant dinosaurs could sit on their eggs without crushing them

A new study of dinosaur nests, as well as a fossil of a dinosaur that died tending its eggs, shows that larger dinosaurs carefully stacked their eggs in a ring around themselves in the nest in order to avoid squishing their young. Dinosaur life hack!

Working on a theory, a team of scientists re-examined samples of fossil pollen from more than 470 sites across Europe and concluded the growth of wild cannabis was rife during the Stone Age. (More like Stoner Age, am I right?)

Your genes remain active even after you die

Even after you kick the bucket, your body keeps operating at the cellular level, and genes remain turned on even days after death. Scientists are studying this phenomenon to find better ways of preserving donated organs and more accurate methods of determining when murder victims were killed. Weird — we thought we were already dead inside.

A new calculation claims that the diameter of the disc of the Milky Way is so massive that it would take 200,000 light years to cross from one side to the other. Literally nobody got time for that.

A research team found evidence that upends previously held notions of why the universe formed as it did, suggesting that the conditions to create a habitable parallel universe are much more likely that previously imagined. Honestly, we could just write Season 5 of Black Mirror ourselves. Now go share this with the biggest science nerd you know.