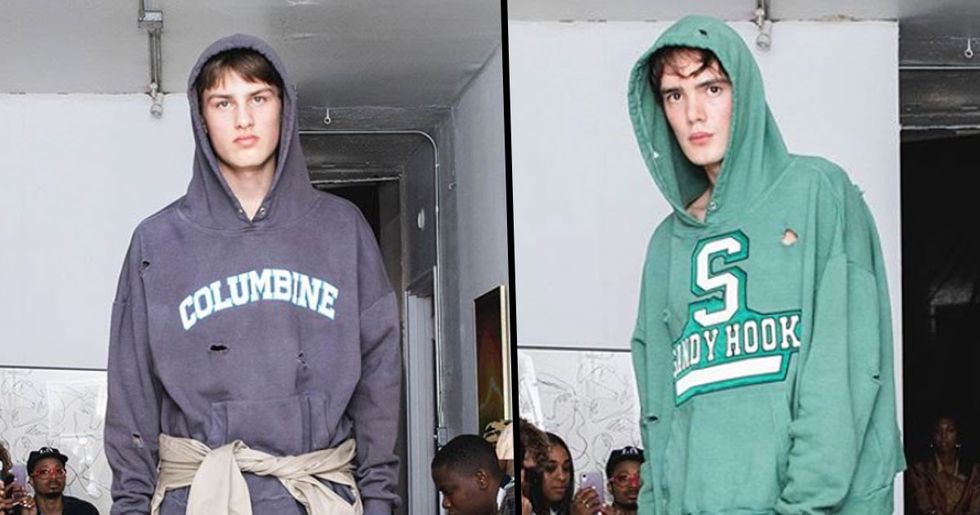 Schools are now on a higher alert than ever before because of consistent mass shootings that have taken the lives of too many children and young people.

Our country has suffered more than enough recently through these endless shootings that have truly shaken us as a nation, and it's something that any normal person wouldn't ever dream of being inspired by in any shape or form.

A fashion brand has come under fire since designing garments in the inspiration of the school shootings that our country has suffered from. Keep scrolling to learn more...

It can be gathered quite loosely with the definition of a "mass killing" because that's exactly what it is, isn't it?

There have already been twenty-two school shootings so far this year...

A fashion brand has been noticed recently for all the wrong reasons...

Bstroy, who is a "neo-native, post-apocalypse streetwear brand" from the U.S, depends strongly on their Instagram account to advertise their quirky and, let's face it, overpriced fashion.

Their Spring 2020 collection has just dropped...

They began showcasing the menswear collection on Instagram and it was what everyone would expect from Bstroy - edgy, quirky, and just a little weird.

But there are certain garments that have ruffled the politically correct feathers of our nation...

Bstroy has featured 3 different hoodies in the collection, and all the hoodies are designed to look like they have survived a school shooting. If you think that sounds problematic, then just wait until you see them!

Columbine High School of Colorado watched a mass shooting unfold back in April of 1999. Twelfth-grade students Eric Harris and Dylan Klebold murdered twelve students and one teacher before each of them committed suicide.

The next hoodie featured was one displaying the Sandy Hook school logo.

On December 14th, 2012, twenty-year-old Adam Lanza went into Sandy Hook Elementary school in Connecticut and shot and killed twenty-six people - including children aged between 6-7 years old. He had shot and killed his mother before driving to the school and committing these horrific murders.

It is also the fourth-deadliest mass shooting by a single person in U.S history.

The final hoodie on display takes on the logo of Stoneman Douglas.

The Stoneman Douglas high school shooting took place in February of 2018 in Florida, killing eighteen people and injuring seventeen more. Nikolas Cruz was a nineteen-year-old expelled student who opened fire on the school with a semi-automatic rifle. Police later caught him and his trail is still ongoing.

Why wasn't anything done in the past about Nikolas Cruz?

In both 2016 and 2017, the sheriff's office received a number of tips about Cruz's threats to carry out a school shooting. He had previously posted on Youtube and on social media talking about his plans to conduct a mass shooting, but the authorities dismissed these tips which eventually lead to Cruz killing all of these innocent people.

People have instantly begun criticizing Bstroy for this insensitive design...

Bstroy made sure each hoddie featured tiny details, such as holes cut into them to mimic that of bullet holes. On Instagram, the comments began flooding in, such as: "My dead classmates should not be a f****** fashion statement."

"I lived through this," another person wrote. "To make money off of something pathetic like this is disgusting. You don't even know how it is to live every day with reminders everywhere you go."

One of the brand owners Brick Owens shared an Instagram post that seemed to be angled towards the subject...

"Sometimes life can be painfully ironic," his note said. "Like the irony of dying violently in a place you consider to be a safe, controlled environment, like school." "We are reminded all the time of life's fragility, shortness, and unpredictability, yet we are also reminded of its infinite potential," the note continued. "It is this push and pull that creates the circular motion that is the cycle of life. Nirvana is the goal we hope to reach through meditation and healthy practices that counter our destructive baits. Samsara is the cycle we must transcend to reach Nirvana."

Catorze began defending his brand on Instagram by replying to some of the comments, one of which said: "Despite your attempt to minimize me into whatever assumptions you've made, knowing nothing about me or the intentions of my art, I still love you as a human and wish the best for you."

An attempt to raise awareness?

Catorze has attempted to claim that the collection is a representation, and using the school shootings is only a form of art. So are any of the proceeds from the sales going towards a charity that helps victims? No? Then it's not.

Catorze mentioned gun violence in reference to the collection...

Speaking to Insider, he said: "We wanted to make a comment on gun violence and the type of gun violence that needs preventative attention and what its origins are, while also empowering the survivors of tragedy through storytelling in the clothes." He also added that he believes the brand's clothing has been overlooked by people who "want to release hateful energy."

There is nothing hateful about being a victim of a horrific crime...

"Our image as young black males has not been traditionally awarded credit for introducing avant-garde ideas," he said.

"These hoodies were made with all of these intentions in mind — to explore all of these societal issues," he continued. "Not just the surface layer of gun violence in schools, but also the different ways that we relate to each other and the dated ideas that still shape the assumptions we make about each other."

The brand owners may insist that the hoodies are a representation of assumptions, but never the less, the brand will be making money off tragedies that our country continues to grieve over - this is not acceptable.