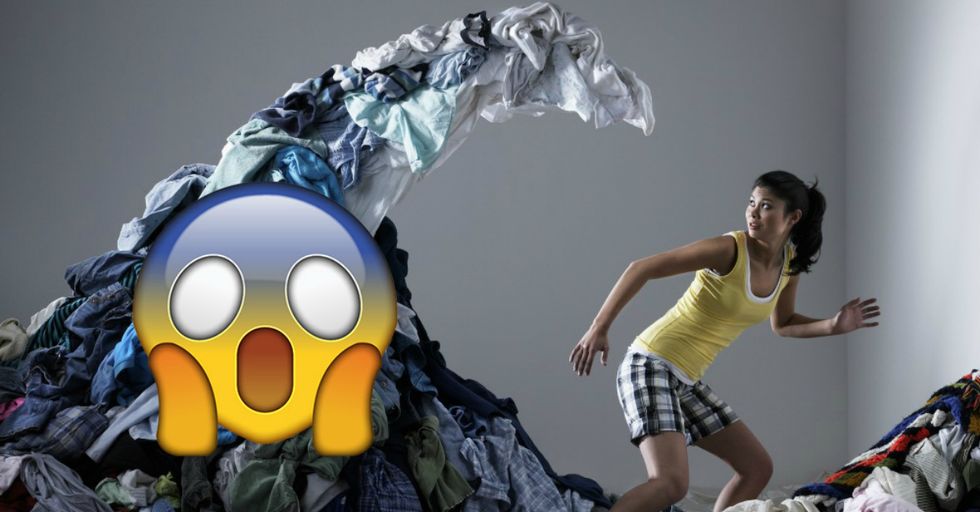 'Fast Fashion' Might Very Well Be the End of Us

Recently, we've been hearing a lot about just how bad the tiny beads found in bath products are for both the environment and our own health. Obama signed a bill banning microbeads in January 2016 after it was discovered that billions of these little devils were ending up in our water supply.

But did you know that something else "micro" is also doing some major damage? Keep reading to find out about how very the clothes on your back could be putting your health at risk.

Do you own any clothing that contains fleece, nylon, spandex or polyester? If you shop at Forever 21, H&M, Zara, Target, or any other fast fashion chains, you definitely do.

And if so, you could be doing a lot of damage to yourself and the world around you.

These types of fabrics are known as "synthetics" and are created from plastic.

Tiny microfibers from synthetic clothing are released every time you do a load of laundry.

The fibers are then washed down the drain, wreaking havoc on ecosystems and our water supply.

Scientists have seen a huge rise in microfiber levels recently.

Levels are so high that they are actually poisoning the ocean.

These dangerous fibers have also been popping up in honey, salt, and beer.

Are you a seafood eater?

If so, you're likely to consume 11,000 of these tiny fibers every year.

They could be making you sick.

Plastic absobs chemicals, and since microfibers are made from plastic, this means we could be ingesting a shocking amount of toxic substances without even realizing it.

Scientists are starting to see the effects of microfibers on sea life.

Professor Sherri Mason from the State University of New York at Fredonia, recently dissected a fish from the Great Lakes and discovered that it's intestines were riddled with synthetic fibers.

After inspecting them under a microscope, Mason described the fibers as, “woven into the gastrointestinal tract."

Researchers at the University of California at Santa Barbara recently discovered that fleece jackets release 1.7 grams of microfibers each wash, on average.

They also found that older jackets tend to shed nearly twice that amount.

The researchers also made a disturbing statement on their website.

“These microfibers then travel to your local wastewater treatment plant, where up to 40% of them enter rivers, lakes and oceans."

Senior research associate, Mark Browne of the University of New South Wales in Australia wrote a paper in 2011 that included his shocking findings.

Browne discovered that microfibers make up 85% of human-made debris on shorelines around the world.

These scary findings are enough to make you throw out your yoga pants and switch to cotton for the rest of your life.

Maybe it's time that we follow Obama's lead and ban these dangerous microfibers before we completely obliterate our natural resources.