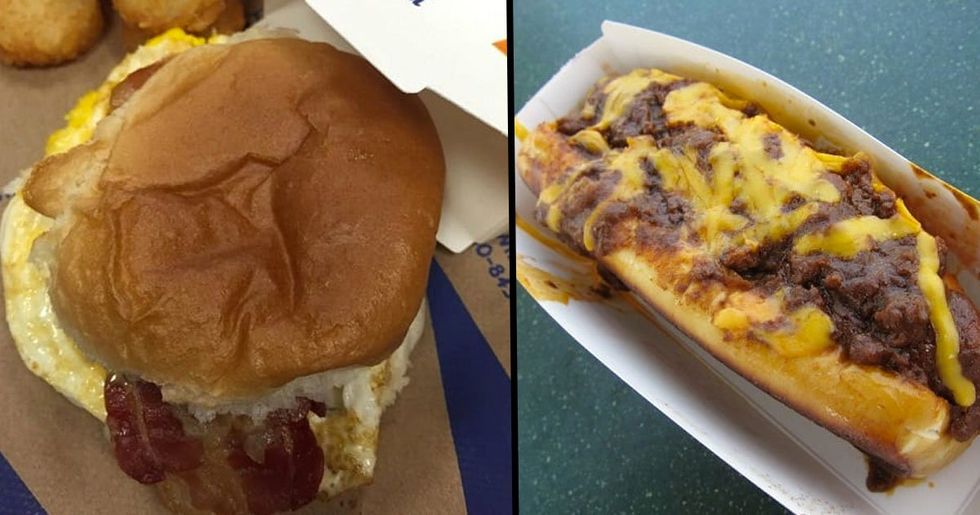 Since the 1950s, fast-food has become a way of life. The hegemony of its advertising and the sheer abundance of its outlets (over five-hundred thousand in the US alone!) has ensured that we eat the discounted food constantly. Dietary nutrition has given way to dietary efficiency.

This societal change, this culinary Stockholm syndrome, has been ruinous for our mental and physical wellbeing. Obesity has soared over the past three decades, and, with developments in neurochemistry marking an inescapable bond between the gut and the brain, scientists are becoming more and more certain that diet plays a vital role in maintaining our mental wellbeing.

Recently, fast-food employees have come together to compile a list of fast food items you "absolutely" shouldn’t touch. And although we should probably stay away from fast food altogether - it’s stunting the growth of kids, turning people obese, and eroding our mental health -, if you're going to eat it, here are the thirty foods to stay away from!

via: sweet and savory

One bag of these babies contains over one-hundred and ten grams of fat - that’s more fat than a whole stick of butter!

We would tell you how bad these are for you, but it's a fish sandwich, no one eats them anyway...

3. Taco Bell: breakfast items (if you have dietary restrictions!)

So Taco Bell takes measures to avoid cross-contamination of foods for vegetarians and people who suffer from allergies. But, apparently, during breakfast time all of that goes out the window when raw bacon can be found sitting beside vegetables. Gross!

Turns out this mummified horse member contains over one-thousand three-hundred milligrams of sodium!

Chilli - the choice food of absentee students and divorced dads. Wendy’s chilli, according to employees, is kept in the fridge for weeks!

Starbucks: their over-priced, misery-stricken coffee sucks, their tasteless food sucks, everyone who goes there to "write" sucks (I'm not in a Starbucks…). It just sucks.

If you eat this sandwich, then say the word ‘Jared’ three times in front of a mirror, you get salmonella.

Dunkin’ Donuts! For the times when you literally can’t find anywhere else!

The cold drinks are larger so you're better off with one of those, instead.

Apparently, the roast beef comes in a paste that’s then dried out in the oven. Sounds nasty.

P.F. Chang’s! Sending Americans running to the bathroom since the 60s.

12. Chick-Fil-A: grilled foods (if you have a gluten allergy)

To anyone who thinks that this is healthy… I’m sorry…. it's eight-hundred and ten calories with one-thousand four-hundred and sixty milligrams of sodium.

AKA diabetes disks. These suckers contain eleven-thousand four-hundred and forty milligrams of sodium. Ten thousand milligrams is literally enough to give you a stroke.

16. Buffalo Wild Wings: anything but wings

Everything here, except the wings, is pre-packaged. Everything!

Is this thing real? Is it exclusively marketed to lonely, sexually-repressed men?

19. Sonic: chili (or anything if you have food allergies)

Employees say there’s Tno way of knowing how long your bowl of chilli has been stewing." Besides, you have a life and friends; you don’t need chilli.

Also, Sonic tends to be a bit lax when it comes to cross-contamination, so if you have a food allergy, it's probably best to stay away.

20. 7-Eleven: hot dogs, taquitos, and other food in the warmer

Apparently, during the night shift, 7-Eleven hot dogs have been sitting there since five am, the previous day.

But, fortunately, you don't need to go to a 7-Eleven because you’re a person, not a starving racoon.

21. Dairy Queen: anything but a Blizzard or Hamburger

via: sweet and savory

Everything apart from the "Blizzard" or hamburger, is old and "not great" quality.

Which begs the question: what’s a Blizzard?

This thing’s loaded with six-hundred and sixty calories, forty-one grams of fat, and one-thousand nine-hundred and eighty milligrams of sodium!

But… look at it… it’s covered in deep fried prawns.

The pizza’s don’t get refreshed, and "are often on the edge of going bad in the Domino’s kitchen".

Don’t start your day with this - it might end.

"If the orange chicken starts to become dry, employees can spoon on a little uncooked sauce to keep it juicy.’

26. Tim Horton’s: anything but bagels or doughnuts

Yep, everything’s frozen. Except for the doughnuts and bagels, which have unionized.

We wouldn’t know whether to eat that thing or stick a flag in it.

28. A&W: anything off the breakfast menu after breakfast time

This depressing breakfast is prepared ahead of time.

"Breadsticks are greased up with day-old butter to keep them looking and tasting good."

We'll let the picture speak for itself. It looks like someone threw up on a wet wipe.

This little dose of heart disease has over forty-two grams of fat inside it.