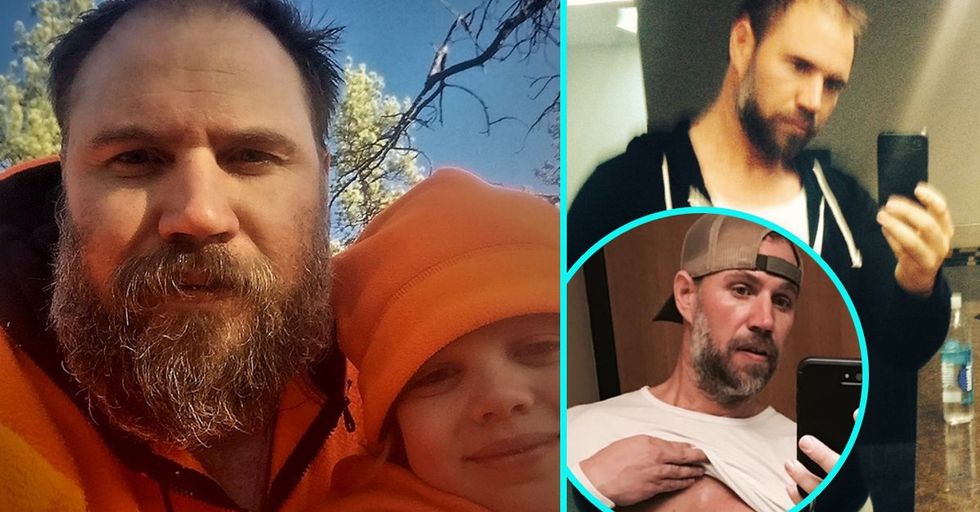 There are a lot of body transformations out there, but this one is extraordinary.

It only took six months for 39-year-old antiques dealer and father of three Jeremiah Peterson to completely transform his body — and his life — from top to bottom.

His story is one of extreme determination and commitment to bettering himself not only for his own good but for the good of his family.

Jeremiah Peterson has always wanted to be the best father he can to his three kids.

He lives with his family (wife and kids aged nine, seven, and six) in Montana, and he always wants to be there for them. What father doesn't?

Peterson decided he needed to make a huge change when he returned from a backpacking trip with his kids.

He wasn't able to keep up with them and enjoy the hiking trails the way they could. On Instagram, Peterson wrote, "Instead of remembering all the good memories we had made on this trip all I can remember is this one thing that kept playing in my head over and over again. I found myself running out of breath and having to take breaks way before my 9, 7, and 6-year-old kids."
This prompted Peterson to commit once and for all to a healthier lifestyle. He adopted a strict keto diet and started exercising every day.

And the changes are extraordinary.

Since August, Peterson has lost 82 pounds and gained a whole bunch of muscle. He looks like a completely different person.

"Don't be afraid of it, don't hide from it. Stare your fat ass in the face and choose who is going to win," he wrote.

And that's exactly what he did. Wait until you see what he looks like now...

This photo was taken a mere 31 days into Peterson's new plan.

At this point, he'd lost 21 pounds and was already looking much leaner. Peterson wrote on Instagram that he was "feeling good" about the progress he'd made.
But he was not about to stop there. And now, a total of 82 pounds later, he has made a mind-blowing transformation.

Look at this muscular man!

"I went from having a real dadbod to having a college kid's physique," Peterson told the Daily Mail. "Since going from fat to lean it's made everything better, my hair and skin look healthier, you can see my jawline instead of chubby cheeks, and I have abs."
Now, Peterson is able to run up those hiking trails with his kids without stopping. When asked how he managed to not only lose so much weight but turn into a sculpted fitness wonder, he said, "The honest to God answer is I did the work!"

He hiked and worked out up to three hours per day and stuck to his diet, no exceptions.

Peterson learned that he had an intolerance to carbs, so he switched to a high-protein keto diet that cut out nearly all carbs except for fruit and vegetables.
And his hard work has totally paid off. "I'm really proud of my stomach," he told the Daily Mail. "My belly used to be a real beer gut but it's going down and even my waist is slimming down too."

It's the difference between looking like a dad and a son," he continued.

"I get told I look 15 to 20 years younger. When you see the results, you get so much more motivation week by week when looking in the mirror. It's made me want to continue to try harder.
"My transformation happened so fast because I did the workout program every day without any time off, which helped cut the fat so quickly."

It's not easy to maintain the motivation to do the work.

So Peterson is using his Instagram account to document his journey and hopefully be an inspiration to others who are looking to make a change.

"Each day that we are not living to our fullest potential is a waste of the precious time that we are allotted," Peterson wrote on his Instagram.

"Having three children and a wife who I want to be around as long as I can made me all the more determined," he said. Of his weight loss, Peterson said, "It transforms not only your physical self but the way you think and feel as well as the future you want for your family. I know if I can do it anyone can."