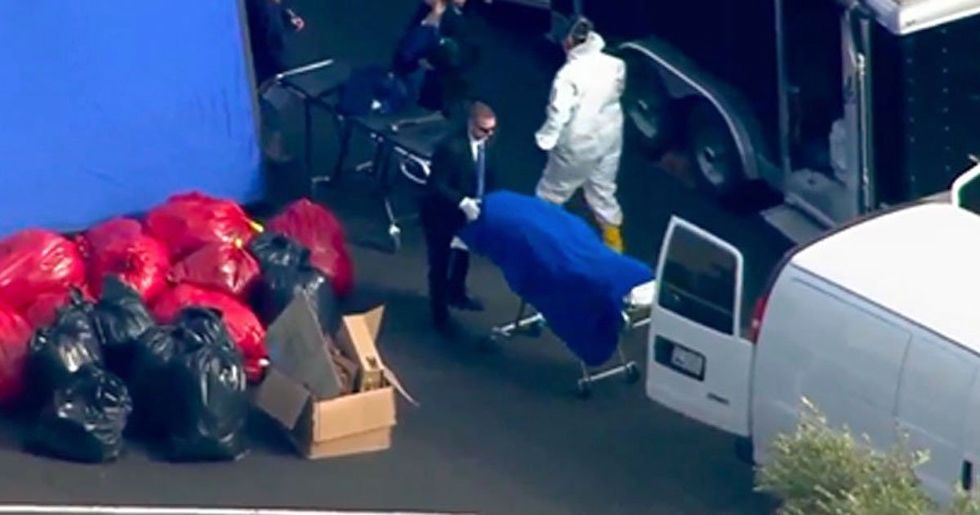 FBI Discovers Buckets of Heads, Cooler of Penises and Bodies Sewn Together in ‘Human Chop Shop’

It's been 5 years since The Biological Resource Center, located in Phoenix, Arizona, was raided by the Federal Bureau of Investigations, with its owner accused of fraud.

However, the sheer horror of what was inside the walls of the center wasn't revealed, until now.

Dubbed as a "Human Chop Shop," the sickening sight that the officers found is stomach-churning, including buckets of heads and bodies sewn together replicating some sort of Frankenstein-like creature.

Keep scrolling to uncover the extent of what was found in the center, and, with the trial looming, what will happen to the owner now.

But be warned, it's truly horrifying.

In 2014, The Biological Resource Center in Phoenix, Arizona, found itself at the center of a multi-state investigation.

It's owner, the unlikely named, Stephen Gore, was alleged to have been illegally trafficking and selling donated bodies for profit.

People were told that the bodies were being used for cancer research.

Thirty-three family members donated the bodies of their loved ones in the hope to help aid research for the deadly illness and were assured that their family members' bodies wouldn't be sold.

Although what actually happened was another story.

The company picked up the bodies of the recently dead and would go on to dismember the corpses to sell their body parts to third parties for profit, despite leading their devasted loved ones to believe that it was all in the name of science. As for the parts that didn't sell, they were cremated.

According to local media, the grisly operation was said to have been going on since 2007.

When it comes to the black market, people can make big bucks from the illegal trading of bodies. The facility reportedly sold heads for $500, arms for $750, with entire bodies eaning them up to $5,000.

Even worse, the bodies were treated horrifically while at the center.

According to statements from the families, who are now suing the company, the body parts belonging to their family members weren’t stored, treated, nor disposed of with dignity or respect.

As a result of the investigation, the center was raided by the FBI.

And the horrors that would greet them were worse than anyone could have imagined.

Until now, the heinous discovery had been kept under wraps.

The gruesome details of the find were not made public, but, now, the testimony from one of the FBI agents who conducted the raid has come to light.

In fact, the discovery was so bad that an agent developed PTSD as a result of what he saw in the facility.

Matthew Parker, an FBI agent, said that moving body bags from the site resulted in a PTSD diagnosis, and that, following the raid, he couldn't sleep after what he had seen. “I couldn’t sleep after seeing that. It was like something out of Frankenstein," he explained.“It looked like a junkyard chop shop where they are just ripping things apart."

According to court documents, bodies were piled on top of each other.

It was so bad that there was no apparent identification to indicate what bodies the parts came from, ABC15 reports.

In fact, there were so many that authorities filled 142 body bags.

Disgustingly, one bag held parts from at least thirty-six different people. The operation was actually so large that officials struggled to properly handle all the retrieved body parts.

But this was just the start of it.

The donated bodies were hacked apart and sewn together using chainsaws.

Horrifyingly, the agent recalled that there was a male torso "with the head removed and replaced with a similar head sewn together in a Frankenstein manner." The head was from a female.

Many of the body parts were infected.

The total number of mistreated body parts that the agents found is utterly sickening.

A harrowing total of ten tons of frozen human remains were found – made up of 1,755 total body parts that included 281 heads, 241 shoulders, 337 legs, and ninety-seven spines.

Because of the sheer scale of the operation, it took a long time to figure out what to do with the remaining body parts.

When plans to cremate the remains stalled, officials brought 3 walk-in freezers to a military base and stacked the body bags inside. Parts from 851 different people remained in those freezers for almost 3 years before they were cremated, reports Reuters.

As for the company's owner, Gore, what happened to him?

Well, the families sued over eleven counts, which include mishandling of dead bodily remains, breach of contract, and negligent referral. Initially, Gore pleaded guilty to fraud, aka, he admitted to misleading customers by shipping them contaminated specimens, but not for actually selling body parts.

And, of course, his company was immediately shut down.

Gore was also sentenced to 1 year of deferred jail time and 4 years of probation following his guilty plea.

However, the investigation is ongoing.

Gore is expected to return to court in October for his crimes, where he will have to come face-to-face with the families that he's betrayed so horrifically.

Sadly, this business has little to no regulation.

So it's not surprising that Gore got away with this for so long. Let's just hope that the families get the justice that they deserve for their loved ones.

Despite everything, it's clear that the FBI's work is very important.

If you want to know more about it, keep scrolling to find out twenty undercover facts about the intriguing organization.