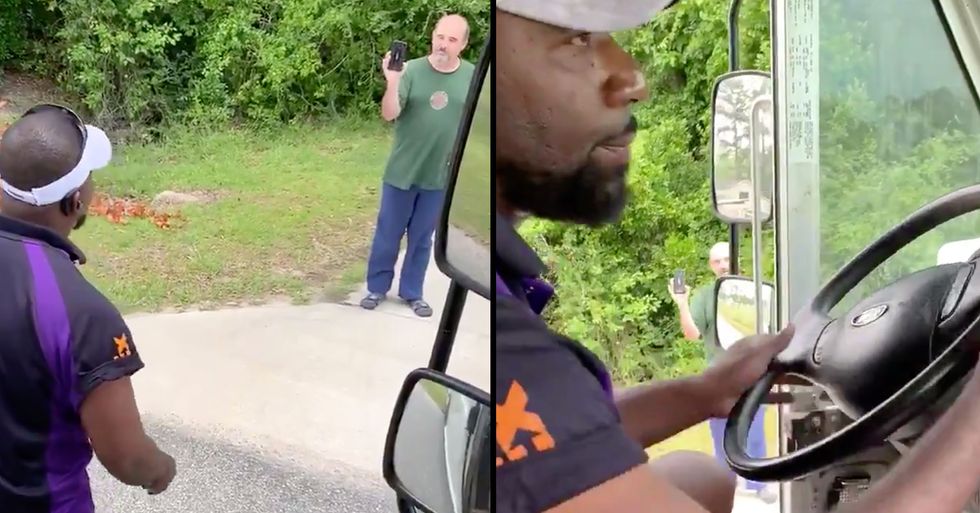 Two FedEx workers have been fired from their jobs because they posted a video of a racist customer threatening them with the police for absolutely no reason at all.

Keep scrolling to read more about this disgraceful story...

Even though there are more people than ever standing up to racism...

Way too many people continue to find themselves victims of hate crimes.

According to FBI data, there was a surge in attacks against Latinos and transgender people in 2018.

And the more recent tragic story of Ahmaud Arbery proves exactly that racism is still a problem in our country.

Nothing seems to be getting done about this life-destroying problem...

If it were a white man that stopped to see what new construction looked like would those men have still showed up with guns? #AhmadArbery
— jeremy snyder (@jeremy snyder)1589871747.0

And recent footage captured by 2 FedEx workers proves this even more.

The video was posted by Antonio Braswell, who works for FedEx in Georgia.

"I’m reposting this video because people like him doesn’t matter white or any race should never disrespect essential workers putting their lives in jeopardy especially with this covid-19," he wrote on Twitter.

Antonio, like thousands of other delivery workers, has been working non-stop during the pandemic...

And the last thing that key-workers need is grief from their customers.

The video shows a white customer filming Antonio and his colleague...

And Antonio's colleague is seen defending himself against whatever the customer has said to them both.

Antonio provided some context to the argument on Twitter...

He explained that the customer accused him and his colleague of trying to break into his house and threatened to call the cops on them.

For some reason, the customer didn't look at the registered FedEx van that the men were driving.

"All we did was deliver his package, he was in the house at the time. It was a quick stop and as soon as we were leaving he ran out his house cursing and threatening us," Antonio explained.

"While we were looking confused we just apologized for being on his yard but he keeps going on then kept saying he would 'whoop our black asses' and then he told his wife to call the cops."

This is when Antonio decided to start filming this man's disgraceful behavior...

But sadly, this isn't a rare occurrence for the workers. The worker said they "go through racism every day on that route in Leesburg but he was the first one to actually come up and actually threaten us."

The story only gets worse...

FedEx bosses asked Antonio to delete his video, which very quickly went viral when he posted it on Twitter, and when he refused, he and his colleague involved were fired from their jobs.

FedEx tweeted about the situation...

But they didn't provide a valid excuse as to why they fired these innocent workers - especially in such a difficult time.

Naturally, people have been left furious over FedEx's decision to fire these men and not investigate the man who racially abused them.

It seems that FedEx has lost itself a lot of customers...

And rightly so if they aren't willing to treat their staff with the respect that they deserve!

There has been a lot of hate directed towards the company...

And Antonio stressed to his supporters that he has no hard feelings against the company, but he is now feeling stressed about providing for his daughter.

Within a couple of hours of his tweet, supporters set up a GoFundMe Page for Antonio and his colleague.

The page reads: "These two FedEx employees were fired simply for doing their job. These funds will be given to the two employees seen in the video who are now out of a job. The funds will be used to help aid living costs and any legal fees the two employees may deal with in the future. I've spoken to both former employees and they will be grateful for any type of support as they transition into finding a new job."

A staggering $62,000 has so far been donated to the workers.

These amazing acts of generosity can only make up for a percentage of what these poor men have endured, just because of their race.

We hope that justice is soon served for Antonio and his colleague...

And we also hope that the man responsible for this disgusting hate crime deals with the consequences very soon. Make sure to keep scrolling to read more about the unjust death of Ahmaud Arbery...