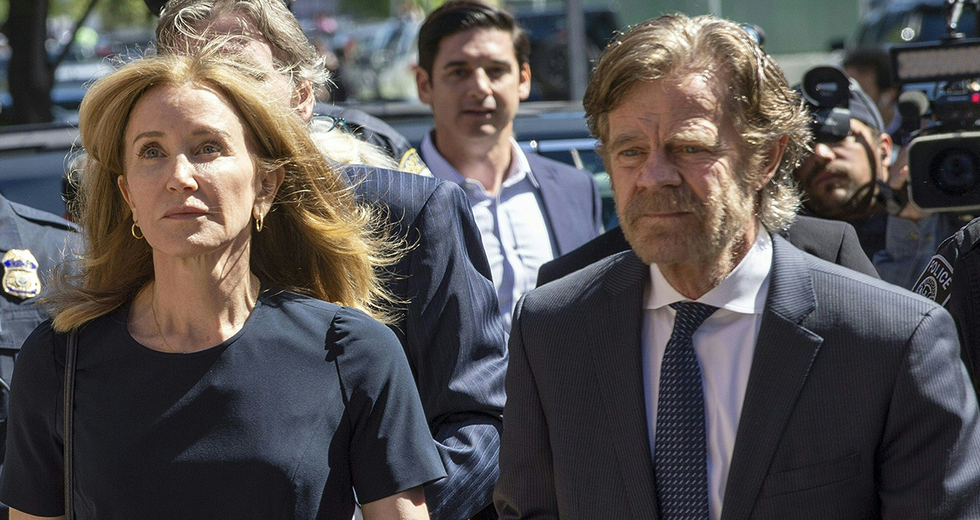 I'm sure we can all remember what felt like the biggest scandal of the year. In the early Spring of 2019, a number of high-profile celebrities were tangled in a vicious college admissions web, involving more than 50 parents across the U.S. The news rattled students, families and university professionals around the country. These parents committed federal crimes trying to get their children into high-profile and Ivy League schools.

After an intense investigation, it was found that families had cheated on entrance exams and falsified documents, some doing so without their children knowing. They artificially inflated their teenager's SAT scores, lied on transcripts, exam scores and faked athletic awards to strategically place their children into spots on collegiate sports teams.

Most notably among them are Full House alum Lori Loughlin and Oscar nominee Felicity Huffman.

Today, Huffman received her sentence of 14 days in jail, along with an expensive fine and lengthy community service hours.

The actress came to the court holding hands with her famous husband, William H. Macy, to await her sentence. Despite Macy's connection to the case, he was not convicted or sentenced to any crimes regarding the college admissions scandal.

In May, Huffman had pleaded guilty to the court for her actions.

The Desperate Housewives star pleaded to one count of conspiracy to commit mail fraud and honest services mail fraud. She had paid an admissions consultant $15,000 to have a proctor change her daughter's answers on an SAT exam.

Ahead of September 9th's sentencing, the U.S. Attorney's Office recommended a different sentencing for Huffman.

The office suggested one month of time served in prison, along with a $20,000 fine and 12 months of supervised release for her crime. Though, Huffman's attorneys thought otherwise and pushed for no jail time whatsoever.

Huffman received a different outcome when it came time for the actual sentencing, as well as a note from the judge.

Huffman was apologetic in court, reading aloud a statement to the court and her family, adding that she was "deeply ashamed" of what she had done. According to CNN reports, the judge announced her sentence and stated,  "You can rebuild your life after this. You've paid your dues."

Felicity Huffman was officially sentenced to 14 days in prison.

Along with serving time, Huffman will have to pay a fine of $30,000 and report for 25o hours of community service. She also received one year of supervised release.

Huffman, along with over 50 parents were charged by the FBI in connection with the bribes.

via: Felicity Huffman, William H. Macy, and daughters Grace and Sofia via Getty

The scandal involves around 50 parents attempting to get their children into high profile colleges including Georgetown, Stanford, Yale, USC, UCLA, and University of San Diego.

Most notable being Lori Loughlin and Felicity Huffman.

Huffman's husband, William H. Macy, who was named in FBI documents was not charged.

Most of the bribes involved changes to SAT scores or faking Athletics resumes to make them look like more well-rounded candidates.

via: Lori Loughlin and daughters Isabella and Olivia via Getty

Parents touched on pretty much all aspects of the application process, from written exams with faked handwriting to boosting extra-curricular resumes.

So how was the SAT cheated?

Parents would hire a proctor (someone used to administer the test in the event that a student couldn't attend the regular date) who would later alter some of the answers of the test in order to improve performance.

The bribes were often done without the knowledge or consent of the children.

However, Huffman’s daughter Sofia saw her score rise from a 1020 in her PSTA to a 1420 the following year. A huge swing.

According to TMZ, both Lori Loughlin and Felicity Huffman have been arrested and are currently in jail.

That would be a real surprise for inmates. Although you can bet the West Hollywood jail is probably just filled with different versions of Charlie Sheen at all times.

Huffman's husband, William H. Macy was named, but not charged.

It's too early to tell what (if any) effect these charges will have on their respective television shows.

Also among the 50 people charged is Bill McGlashan, millionaire investor and currently serves as a board member for Hollywood agency CAA.

Color me shocked that someone connected to one of the most duplicitous parts of Hollywood is wrapped up in this. It's like if Ari Gold had a child and wanted them to get into school.

Some University coaches were also charged for accepting the bribes.

Including coaches and officials from Georgetown, Yale, USC, and Stanford.

Huffman had also pursued running this same scheme again for her younger daughter but decided against doing so at the last minute.

Because, you know, if you get away with doing something illegal the first time, you should just keep doing it because there's no way you'll get caught this time.

While in the process of taking the exams, their youngest daughter, Georgia, was prepared to take her SAT twice, once on her own, and once with the proctor system that they had set up.

Way to have faith in your own child's ability, guys.

When it was determined that her solo SAT score was enough to get her into Georgetown, they decided to forgo any additional illegal help.

Congratulations on being smart enough that you didn't need to cheat in order to get into college on top of being a rich white daughter of a celebrity.

But the SAT score changes were only the first way the parents cheated.

They pretty much had their hands (and their money) on all parts of the application process.

They would also falsify documents, including transcripts and exam scores — even false athletic awards and other activities.

Students claimed on their applications that they received higher grades or even athletic awards in sports they never even participated in.

Additionally, they would bride athletic coaches and administrators to claim their children were hot athletic prospects that should be recruited — regardless of their athletic abilities.

Loughlin's daughter was made out to be a top crew prospect, despite never having rowed crew in her life.

They sometimes even went as far as Photoshopping their children's faces on other photos of water polo players for proof.

At least they were thorough I guess!

This bribe to coaches reportedly cost Loughlin HALF A MILLION DOLLARS.

That's nuts. Her daughter went on to fake an injury when she was eventually accepted in order to skirt expectations.

The reporting claims that in many cases the kids were unaware of their parents' influence.

But like, can you imagine you're casually applying for college at USC and you start getting a bunch of USC Crew swag in the mail? Either the kids definitely did know, or they really are dumb enough to need all this cheating and bribes.

Finally, they would even have other students take classes for their children with the expectation that they could use those grades to submit to colleges.

At the center of it all is a man named William Rick Singer.

He and his company reportedly collected over $25 million dollars in just under 10 years running this scheme.

Singer is the founder of the Key Worldwide Foundation.

And I have to say, if there was ever a fake name for a charity, it would be Key Worldwide Foundation.

Here is what their website said about the founder.

"Rick draws on his life experiences of being a father and college athletics coach. He has seen first hand the stress that the college admissions and athletics recruiting process can put on a family.

"Over the years, Rick and his team of coaches have helped thousands of students fulfill their life passion in getting into the right college to achieve their dreams. Using The Key method, Key coaches help unlock the full potential of your son or daughter, and set them on a course to excel in life."

Ah yes, "The Key Method" aka the "Gimme All Your Money" method.

Parents hiring a proctor would make a "charitable contribution" to the foundation.

The foundation would then pay out the proctor in return for their services. Real hard to trace, guys.

And the proctors were paid up to $40,000 to administer the test. That's some easy living right there...

Proctors were often given a handwriting sample in order to help cheat essay questions.

This is not the first time one of Lori Loughlin's daughters has gotten in trouble when it comes to college.

Less than a year ago, she posted a video to her 1.9m YouTube followers stating, "I don’t know how much of school I’m gonna attend, but I’m gonna go in and talk to my deans and everyone, and hope that I can try and balance it all. But I do want the experience of like game days, partying … I don’t really care about school, as you guys all know."

I bet her parents are just thrilled they spent a half a million dollars to get her into college only for her to not attend.

I would feel sorry for them, except I don't at all because what they did is disgusting.

I don't know guys. She seems real sincere. I believe her.

But that's just my opinion. What do you think?

Should these people be punished as much as they are? Or is bribery just part of the ivy league game now? Were these parents way off base or was it just a case of parents doing anything to help their children succeed?