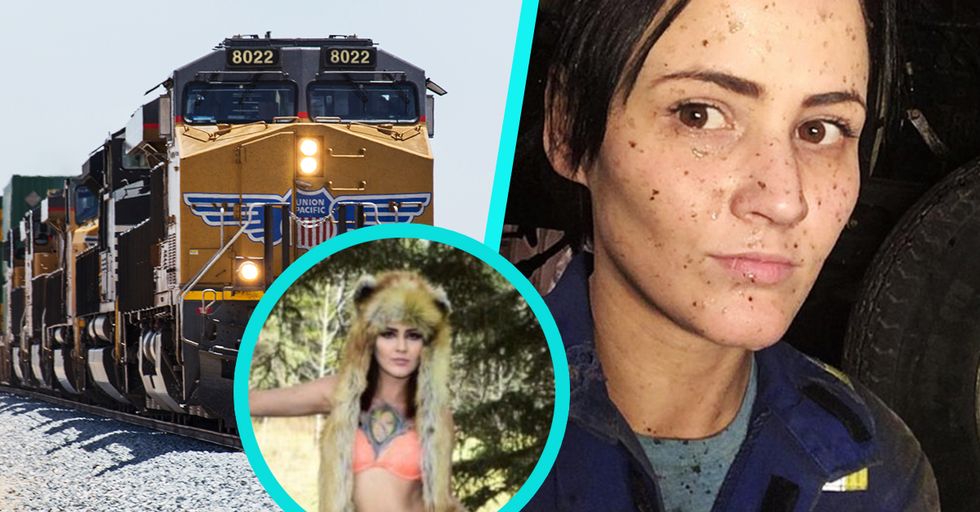 Train conductors – when was the last time you thought about them? Honestly, I only ever think about them when I imagine the Hogwarts Express and wonder who exactly was in charge of steering the train through its magical journey to the wizarding school (I've always imagined a short, bearded dwarf, or something like it).

I've never, however, imagined a sexy train conductor – or a female one, for that matter.

Turns out, I suffer from a startling lack of imagination. There are indeed female conductors – or conductresses, as they're more properly known (although, I don't know why you would bother to use this feminization of the title).
In any event, one such conductress is Stephanie Katelnikoff, who used to work for Canadian Pacific Rail, a Canadian railway company.

Katelnikoff is one of those salt-of-the-earth Canadians. She buys and fixes used bikes in her spare time, and then she donates them to needy children.

Woman just fired by @CanadianPacific #StephanieKatelnikoff fixes hundreds of bikes in her kitchen and gives them to… https://t.co/JXRkpFCpoJ
— Uncle Bill 🌎 (@Uncle Bill 🌎)1516748220.0

She does this, she says, because of her own experiences growing up as a kid.

When I was younger I spent a lot of years in and out of the hospital. I was really sick growing up, so I mean I had a lot of doctors and nurses that were super, super nice to me and it just made everything so much better and easier.

Oh, and Katelnikoff has one other hobby. She likes to post saucy, saucy pictures on her social media. Pictures like these.

Turns out, the sauce was too much for her company, because they fired her in November – again.
You see, Katelnikoff was initially fired after the Banff derailment, during which 15 cars carrying grains and fly ash, which a material commonly used to make concrete, fell off the track west of Banff, a tourist town in Canada.

Katelnikoff was reinstated after investigators discovered that not only had a damaged portion of track been to blame for the derailment, part of the reason she'd been dismissed was filing a sexual harassment suit against another employee. Shocking, right?

@CanadianPacific Katelnikoff had to go to arbitration when she was wrongfully fired over the Banff derailment (whic… https://t.co/S4QU9zGUAh
— Joshua Hind (@Joshua Hind)1516713942.0

But the railway company wasn't done with its shenanigans because when they fired Katelnikoff again, they cited, as part of the reason, "violating CP Rail's code of ethics and its internet and email policy," and submitted risqué social media images for evidence.

I can tell you @CanadianPacific that I have more problems with your actions that hers. Her photo on railway track… https://t.co/x6kEYpUIp1
— Gary Bourque (@Gary Bourque)1516706126.0

Maybe Katelnikoff was simply too hot to handle, but more likely are the videos she posted criticizing the company and then-CEO Hunter Harrison. Also, as CBC News notes, "CP Rail's code of conduct posted online does not have a section specifically dealing with social media and a manager told Katelnikoff there was no social media policy."

While CP Rail may have all sorts of reasons for firing Katelnikoff again, she definitely saw this coming, even far back as 2016. As she said to CPC News then, "I definitely think I'm going back with a giant target on my back."

Does this mean Toronto Firefighters will soon be looking for work also? @CanadianPacific #relax #overkill pic.twitter.com/jTwYfEbmXy

Just goes to show that the places you always assumed to be sexist are definitely as bad as you thought.