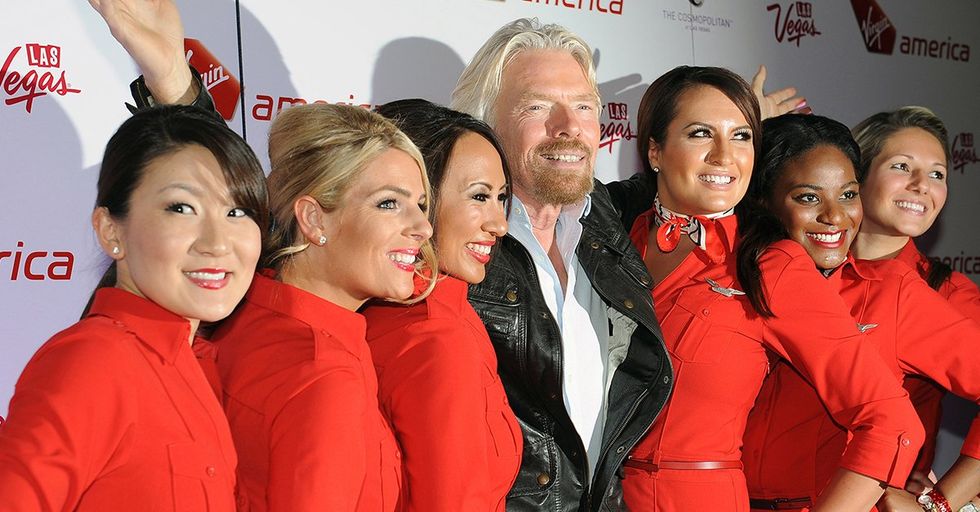 The commercial airline industry has undergone a drastic change since the first passenger flight from St. Petersburg to Tampa, Florida in 1914. Greater seating capacity, improved comfort, new safety regulations, food amenities, in-flight entertainment, and more have all transformed the experience of air travel into something that’s really pretty luxurious when you think about it.

Sure, there might be a baby or two wailing and you may not always get the seat you want, but you’re also defying the laws of gravity while being waited on by a staff of people who are also trained to save your life. If that’s not luxury, I don’t know what is.

Cabin crew members do a lot of the heavy lifting in ensuring your flight experience goes smoothly, and many of them have to do it all in a full face of makeup, wearing a starched uniform I’d never want to travel in. But times are changing, and so are long-held ideals around beauty standards for women in and out of the workforce.

Virgin Atlantic is an airline that marches to the beat of its own drum.

The Alaska Air Group officially completed its merger with Virgin America last year, but the company has maintained its quirky personality.

Its funky features make it stand out as much more fun and modern choice for flying.

They’ve even got touch screen ordering.

For when you just want to order, eat, and fall asleep without having to talk to anyone.

The airline’s aesthetic is strong.

It can be seen prominently through Virgin Atlantic’s staff, who have long been required to meet a strict set of beauty and grooming standards.

Now, the Virgin Atlantic dress code is getting a long overdue makeover.

The carrier recently announced that it would no longer require its female crew members to wear makeup at work.

To be clear, that means prior to this change every female employee had to wear makeup to work. Everyday.

No rolling out of bed and onto the tarmac. Even though the job is primarily maintaining passenger comfort and safety, crew members also had to maintain a flawless red lip and perfectly coiffed hair.

The airline’s stringent guidelines for employee attire were also relaxed.

Previously, female Virgin Atlantic crew were required to wear a skirt uniform unless they made a special request for pants. After the recent change, pants will come standard for all genders.

The change is a reflection of the desires expressed by Virgin Atlantic’s customer audience and staff.

In an official statement, the company said its uniform was intended to reflect both the company’s iconic style and the individuality of its crew members.

The new uniform flexibility will enable greater overall comfort for team members as they serve guests and ensure safety aboard transatlantic flights.

The old rules were clearly outdated.

An aesthetic is crucial to the Virgin Atlantic experience, and its requirements around appearance were something the company placed a great deal of importance on.

Of course, anyone working in hospitality is expected to be clean and put together.

Over a series of grooming classes, employees learned everything about how to achieve the glossy fifties glamour look Virgin Atlantic uses as a nod to the early days of air travel.

Every element of the look was highly regulated.

The official guidelines included a limited range of acceptable colors for lipstick but encouraged the use of one specific shade of red that matched company uniforms.

Of course, the uniform also called for women to wear mascara and blush.

Male crew members could also wear clear mascara and makeup to cover blemishes, as long as it wasn’t obvious. As I said, the gender norms were very outdated.

There were rules for nails, too.

The shade must be either neutral or a lilac color that corresponds to the pattern on the company uniform’s signature scarf.

For all its modern amenities, the company wasn’t seen as particularly progressive.

Professionally, Branson seems to aspire to a persona that exists somewhere between CEO, and rockstar.

The multi-hyphenate business leader is infamous for his sexualized company marketing and arguably misogynistic public antics.

Everything in the Virgin brand family is heavily associated with the imagery of young women.

The adherence to a fifties style doesn’t end at aesthetics – Branson appears to retain the era’s sensibilities around archaic gender dynamics.

The sexual innuendos are everywhere.

Conventionally attractive women are a major part of Branson’s branding, from the decorations on his planes to company events complete with unnecessary bikini-clad models.

Ads like these have raised eyebrows as our society evolves beyond the outmoded ideas represented in the company’s marketing.

A lot of it is downright juvenile.

This new logo announcement was intended as an April Fool’s joke, but few were laughing at the immature, breast-obsessed advertising.

His cheeky take on business was once risque and intriguing to some in an otherwise tightly wound professional market.

But with a new public dialogue around gender inequalities and sexual harassment, Branson’s antics take on a darker tone.

Like this video guide for men looking to “get lucky" up in the air.

Virgin Atlantic is the first company to publicly change their stance on employee makeup requirements.

Ultimately, makeup doesn't help people do their jobs better if they're not interested in wearing it.

Of course, companies want their staff to look presentable, but they don’t need to enforce outdated gender stereotypes to achieve that.

Sex sells, but at what cost?

Enforcing makeup rules like those Virgin Atlantic once required plays into a larger gender disparity that we as a society are slowly trying to separate ourselves from.

The company’s new policy is a step in the right direction.

Female Virgin Cabin Crew are no longer required to wear makeup and can wear trousers How many tiny changes until we reach Equality?
— Elle Bright (@Elle Bright)1551733898.0

Plus, it’ll probably make it a little easier for female crew members to do their jobs now that they can wear pants.