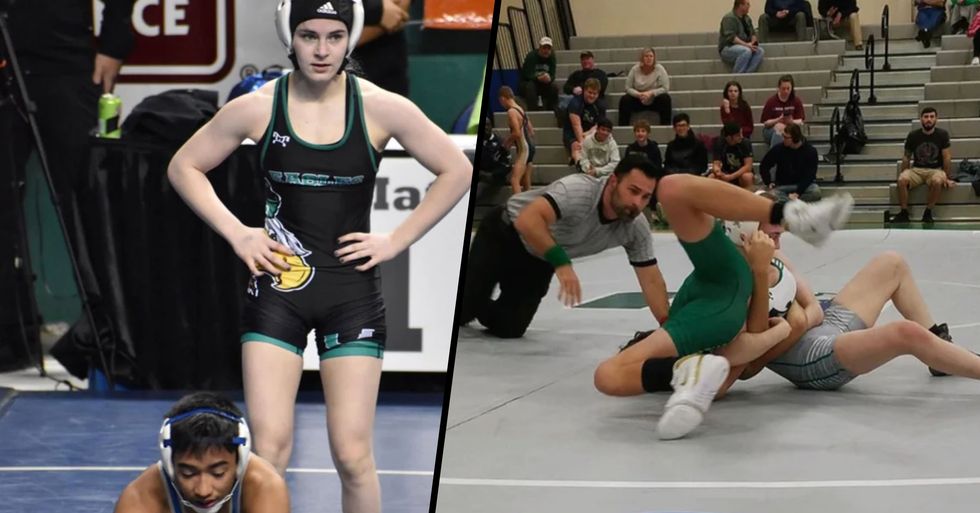 Female Wrestler Makes History After Beating Every Male in Her Divison

Ladies, prepare yourselves for the most inspirational article you ever will read.

Sixteen-year-old wrestler, Heaven Fitch, has smashed records and made history after she beat every single male opponent in her division. Talk about girl power.

Keep scrolling for the full story, and to watch her incredible win for yourself...

This is Heaven Fitch.

I know... She looks like a typical teenage girl, doesn't she?

Well, there's a little more to Heaven than meets the eye...

While most sixteen-year-olds spend their spare time hanging out with friends or watching TV, Heaven has a rather different hobby.

Heaven is a professional wrestler.

Well... Do you believe us now?

Heaven, of Uwharrie Charter, North Carolina, has been into the sport her entire life and, at the age of sixteen, she now competes competitively in her state.

But how does a young girl like Heaven even get into wrestling in the first place?

I'm all for equality, but it's undeniable that wrestling is a primarily male-dominated sport.

Heaven was actually inspired to take up the sport after watching her older brothers competing...

And she would regularly fight with them at home.

But, initially, her parents were reluctant to let her wrestle professionally.

“I nagged my parents, basically, because I wanted to do what [my brothers] did," Fitch told the Independent Tribune back in 2018.

They weren't comfortable with their daughter wrestling.

And continued to fight for what she loved. She said: "But I would just be like, ‘Well, if they can do it, then I should be able to do it.’"

Because, as everyone should know...

Gender should never determine what someone wants to do with their life. Got it?

And Heaven was finally able to professionally - and safely - take part in the sport she loved so much.

She threw herself headfirst into the sport.

And started wrestling as part of The North Carolina High School Athletic Association.

And recently won the title for the most outstanding wrestler in her division. So, yeah. She's causing serious waves in the world of female wrestling.

Heaven became the first female wrestler to place, coming in fourth in her division.

She has accomplished something even more remarkable.

Heaven has made history.

The teen is officially the first female wrestler to beat all her male opponents in a high school championship in her state of North Carolina.

She won the 106lb weight class on Saturday.

It was an 8-person competition that included 7 male wrestlers, said James Alverson, assistant commissioner for the high school association. And Heaven completely smashed them all.

In her first match, she won with a dominate pin, which was followed by a 9-4 decision in the semi-final...

And then a near-unanimous 11-3 decision in the final.

Heaven radiated with happiness when she was declared the winner...

And excitedly ran into her family's arms. "I'm just really overwhelmed ... It's like insane what I've done, it's not fully sunken in yet," she told WRAL-TV.

And her secret behind the win?

"I kind of dominated the match if I'm being honest."

But as well as her win, she's just happy to be an example to other aspiring female wrestlers.

"I'm just glad I can be a role model for people younger than me and it's so insane to be inspiring to others. To think that others look up to me is kind of crazy."

You can watch her historical accomplishment above.

Women are killing it in the world of sports.

Keep scrolling to read about Simone Biles, the inspirational gymnast who has completely rewritten history with her astounding skills.
20%