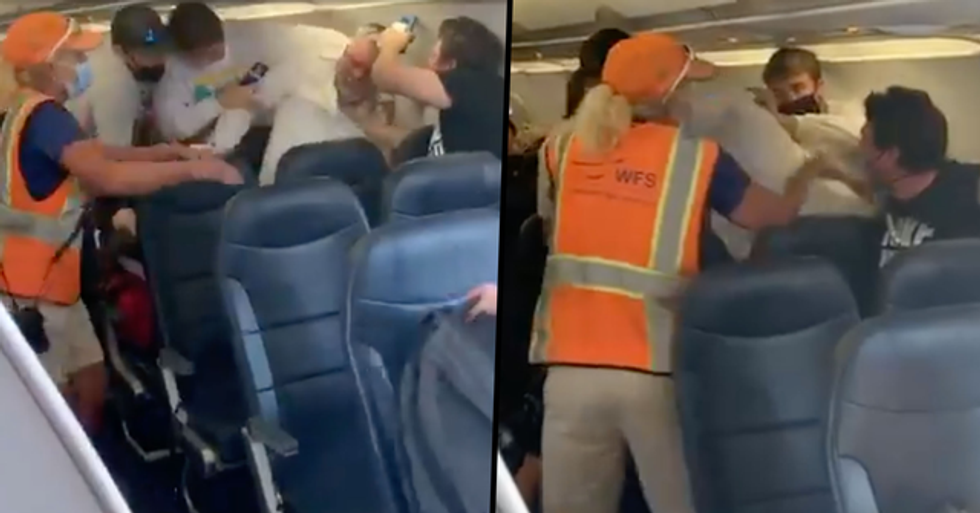 Shocking footage has captured the moment a fight broke out on an airplane after a passenger refused to wear a face mask.

The incident happened aboard an Allegiant Air Flight from Mesa, Arizona, to Provo, Utah, on Saturday, October 3rd.

A passenger boarded the aircraft wearing just a face shield, evidently in the belief that it would work just as effectively as a face mask.

Well, he was wrong.

Because it turns out that face masks and face shields are very different things.

In an effort to help reduce the spread of COVID-19, the Centers for Disease Control and Prevention recommends people wear masks or cloth face coverings...

Especially while using tightly-confined modes of public transport, such as buses, trains, and airplanes.

However, some have opted to wear face shields, instead.

And, while these plastic visors are popular amongst members of staff in shops, bars, and beauty salons, it is heavily recommended that they're not to be used as an alternative to face masks while onboard public transport.

Experts say face shields have limits to the amount of protection they can offer.

They seem to be most effective in protecting against cough droplets for people in close range of one another but cannot protect from droplets circulating in the air. However, their efficacy has not yet been widely studied.

So, for now, face masks have been deemed as a better option for most people...

However, this airline passenger clearly missed the memo, and he created a whole lot of fuss as a result.

Moving swiftly back to the story...

A flight attendant aboard Allegiant Flight 607 from Mesa to Provo politely requested that the passenger, who was wearing a face shield with no face mask, cover his nose and mouth with an appropriate mask.

The airline’s policy requires that masks are “of solid material, fully cover the mouth and nose, fit snugly against the face, and be secured under the chin."

The airline also hands out masks to all boarding passengers.

On top of this, the airline does not allow coverings “with exhalation valves, holes (such as lace or mesh), neck gaiters, and bandanas."

They also state that face shields may be worn in addition to a face covering, "but not as an alternative."

But regardless of this policy, the man stubbornly refused to wear an appropriate mask.

Passenger Rylie Lansford, who was sitting a row ahead, witnessed the full altercation, and told the Arizona Republic: "He had a face shield on so he didn't think he needed to wear an additional mask."

Lansford, who runs her own bakery in Utah, also said that the crew member indicated that she had dealt with this same passenger on a previous flight...

Where he had also caused a commotion regarding the use of an efficient face mask.

Lansford described the passenger as being "distressed because he was heading to visit his mother at a hospice."

But, when another flier sitting in the window seat in her row yelled, “It’s called COVID!", tensions started to escalate.

A different passenger told the man to leave so the flight could take off...

But he allegedly shot back with, “Mind your own f*****g business," according to police.

The tension amongst the bickering passengers was slowly reaching breaking point...

“You could just feel that something physical was going to start happening," Lansford recalled.

And, when the crew attempted to escort the stubborn passenger from the aircraft...

Lansford was able to jump from her seat just before the fists started flying...

And she filmed the shocking altercation from the opposite side of the plane.

The scenes were quite literally unbelievable.

Other passengers were seen scrambling with the man, who was being physically dragged from his seat.

Both elbows and fists were flying...

And the poor airline worker stood on, looking nothing short of petrified.

The unruly passenger was eventually escorted off the aircraft.

“While the passenger was being escorted off the plane, he had an altercation with another passenger. Law enforcement was called to assist," Allegiant Air told the Arizona Republic in a statement. He now faces a misdemeanor count of disorderly conduct.

You can watch the full altercation here.

For more aircraft dramas, keep scrolling to see the moment that an unruly "Karen" was thrown off a flight for her refusal to wear a face mask...
20%