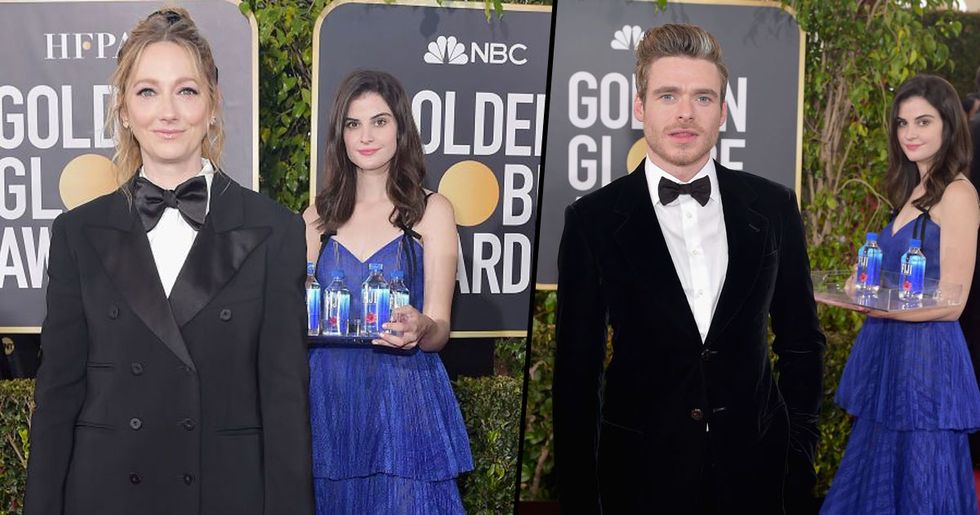 The FIJI Water Girl Stole The Show At The Golden Globes

Gone are the days of you tuning in to watch the Golden Globes just to see your favorite celebrities and hosts. Now it's all about the water staff.

Don't have the talent to sing or act? Don't worry, this FIJI Water Girl will show you how to become famous overnight just by keeping people hydrated.

This year, at the Golden Globes, the FIJI water promotion woman stole the show with her admirable confidence and dedication. Everybody was talking about the FIJI Water Girl. During the show and afterwards. And she didn't even have to wear a meat-dress or anything.

Social and online media were shook with tweets, memes and articles within hours since the Sunday night started. People have been praising FIJI Water Girl for her promotional skills and a natural talent to steal the spotlight. Others noted how much strength and courage it must have taken her to keep on photobombing in front of unhappy paparazzi.

Water promotion employees are not new to the award show industry.

But this year at the Golden Globes everyone's attention was on one particular staffer of FIJI bottled water. This, so called, FIJI Water Girl managed to successfully photobomb a number of A-list celebrities this weekend, reported Mashable, and it's one more thing I will be adding to my bucket list.

With her eyes wide, smile on, strong eyebrow game and perfect sense of where the camera is, this girl was the star of the night.

Just like Mashable noted, at this year's Golden Globes, a star is born.

"FIJI Water woman is your new idol, or at the very least, your next Halloween costume. All hail her!" Mashable continued.

The blue dress did her justice.

In a crowd of black and white and gold celebrities, dark blue really stood out. You couldn't look away.

Within less than 24 hours, the Internet was flooded with hilarious FIJI Water Girl memes.

People kept saying the girl deserved a Globe for Best Supporting Role. Others hoped she would be the next host of this and other award shows. I hear the Oscars is still open?

FIJI Water has been the official bottled water partner of the Golden Globes for over 3 years now.

And they, too, shared their part of the fun on Twitter: "We’re so glad everyone is talking about our water! *senses ominous presence* She’s right behind us, isn’t she?"

The water girl has name, though.

Meet model Kelleth Cuthbert. Nearly 6 ft. tall and living in Los Angeles, Kelleth has an Instagram page which, after the Golden Globes, went from 111 followers to 74,500! Literally, an overnight success.

She was hired by Fiji to promote the brand and give out water bottles...

But she used the opportunity and walked out of the show with thousands of new followers and instant fame. Genius!

Somebody created a fake Twitter account on behalf on FIJI Water Girl, making Monday just that much easier to bear.

Wondering what she was thinking during the show?

One guy even wrote 200 pages of her (possible) inner monologue.

In all seriousness, though, Kelleth is an inspiration to all women.

#fijiwatergirl 😂 you know all the paparazzi are YELLING at her to move. She’s a strong woman. Supposed to be hydrat… https://t.co/i1KkInMblD
— Meg Harrell (@Meg Harrell)1546826521.0

Sure, you might be there to represent somebody else, but that doesn’t mean you can’t win some points for your own career as well. Since you’re there anyway…

Who says you can't have fun, handing out water bottles?

No, no, she was for real. It would have been amazing, though.

She kept her game on throughout the entire night.

Mirror noticed, "Even when Nicole Kidman wasn't looking at the camera, Fiji Water Girl was..."

And even at the end of the night, she kept her sense of humor.

Kelleth told her Instagram followers that even though she felt "dead" after the show... It was "not the worst way to spend a Sunday..."