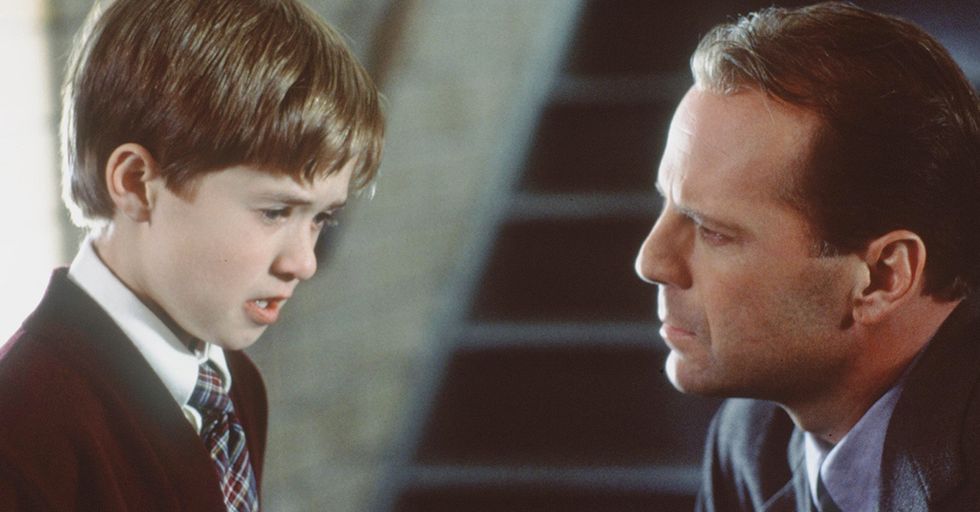 20 Films with the Most Mind-Blowing Twist Endings Ever

A good plot twist is one of the most fun experiences you can have at the movie theater (and yes, that includes putting Peanut M&Ms in your popcorn).

Here are 20 of the greatest movie plot twists of all time.

(And in case you haven't figured it out already, there will absolutely be spoilers!)

The Twist: The dead guy that has been in the room for the entire movie stands up and reveals that HE'S JIGSAW. If you say you saw that coming, you're a gosh darned liar.

The Twist: The magician Robert Angier (played by Hugh Jackman) discovers that his nemesis is actually twin brothers so committed to their trick of "The Transported Man" that they've been living the life of one man. Oh yeah, and the whole thing with the water tanks under the stage. This movie is such a trip.

The Twist: Um, basically the whole movie. This extensive write-up does a great job of explaining every plot detail. Basically, the black-and-white footage in the movie takes place in the past. The whole thing is presented out of order.

The Twist: Kevin Spacey's character is Keyser Söze. He made up his whole story by looking at the board in the room where he was being interrogated. "The greatest trick the devil ever pulled," indeed.

The Twist: Stinky Pete — the fun-loving old-timey prospector — is revealed to be an antagonist who foiled Woody's escape plan and framed Jessie in order to keep the toys together for a museum. For shame! And while we're talking about animated films...

The Twist: The big bad (or should I say, "the big baaaaaad"?) turns out to be Assistant Mayor Dawn Bellwether. That cute little sheep was the mastermind behind the prey-supremacist conspiracy!

The Twist: When Anna goes to Hans to be rescued by her "true love's kiss," Hans leaves her to die in order to take over her kingdom. (Although I think parents will agree that the true unexpected twist from this film was just how long their kids would be obsessed with it.)

The Twist: Louise's daughter (who dies at the beginning of the film) is her future daughter that she has with Ian. Talking to the heptapods gave her the ability to see the future. (By the way, if you liked the film, I also recommend the short story called "The Story of Your Life" by Ted Chiang!)

Writing about this heartbreaking documentary's twist would rob you of the experience to watch it yourself, which is really what the movie deserves. (If you really can't stand not to know ahead of time, you can read the Wikipedia page of the film.) Suffice it to say that if you're not crying within the first 5 minutes of this movie, you will be sobbing by the end of it.

The Twist: Everybody is racist and dangerous — including Rose. Admit it: The thought of the "lost keys" scene still sends chills up your spine.

The Twist: The robot, having successfully manipulated everyone, leaves the protagonist locked in the fancy mansion and escapes to join society. I mean, you knew that guy was going to fall in love with the robot, but there's no way you called the ending.

The Twist: Ben Affleck's dead wife is, in fact, not dead. In fact, she framed her husband for her murder. And somehow, the movie gets even crazier.

The Twist: Upon arriving to pick up Liz for the homecoming dance, Peter Parker discovers that the Vulture is none other than Liz's father. This scene is also known as "the one that made everyone in the theater gasp collectively."

The Twist: That elevator scene! You're in such a state of shock when DiCaprio's character gets shot that you don't even know how to handle the next guy getting shot...or the one after that.

The Twist: Ellen Page's character didn't go to an Internet predator's house to hook up with him. She went there to (fake) castrate him. (If you haven't seen this 2005 film yet, you totally should!)

The Book of Eli

The Twist: Eli was blind the whole dang time! Is it a great film? Nah. But there's no way you saw this twist coming. Neither did Eli, as it turns out.

The Twist: Old-lady Briony reveals that the happy ending between Cecelia and Robbie never happened. She just wrote it into her book. And thousands of people all around the world screamed "Why, Briony? WHY?!"

The Twist: There are actually a number of unexpected plot points in the film, but I'm gonna have to go with "the entire alien-filled ending" for the most mind-blowing of the twists.

The Empire Strikes Back

The Twist: Darth Vader didn't kill Luke's father; Darth Vader is Luke's father! Yes, the film is 38 years old. It still has one of the greatest plot twists of all time. (Unless you speak Dutch and put together that the word "vader" means "father.")

The Twist: Bruce Willis was dead the whole time! THE WHOLE TIME! Did movies even really have twist endings before this film came on the scene? Say what you will about M. Night Shyamalan, but he got everyone with this twist.