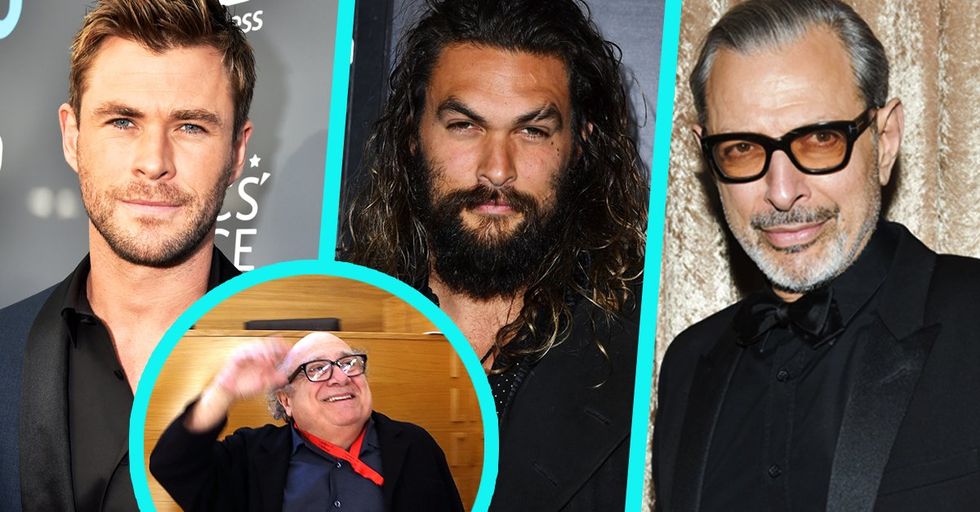 But who are the tallest men in Hollywood? The answers may surprise you.

At 6'1'', Harrison Ford is actually much taller than he seems on the screen. The Indiana Jones and Star Wars actor is not only a gifted pilot as well, he's also a real life hero who recently saved a woman from a car crash.

We've always known Hemsworth is tall – and hot. Honestly, the only reason we ever watch any of the Thor movies is to catch a glimpse of him shirtless. Oh, but they're really good movies as well.

Despite the seven year age difference between them (Chris is 34 and Liam is 28), both Hemsworth brothers are the exact same height. But unlike his brother, Liam conquers the YA set with his roles in the Hunger Games franchise.

Here is a case of an actor being way taller than we expect. Perennial favorite Chevy Chase, who was a staple of Saturday Night Live and starred in the National Lampoon series as everyone's favorite dad, Clark Griswold, is actually a stunning 6'4''. Who knew?

Would you believe Jason Segal is 6'4''? We knew the How I Met Your Mother star was tall, but we didn't know he was towering. You learn something new every day.

Here's another case of someone we swore was shorter. The Full House star, who plays TV father Danny Tanner is an astounding 6'4''.

Because of course. Sutherland is great at playing tall, elegant men who invariably turn out to be villains – like the antagonistic President Snow of The Hunger Games franchise – so of course he's 6'4''.

We've always known action movie star Steven Seagal is tall, so no surprises here. His legs have always seemed extra long as he kicks bad guys in the chest.

Well, you gotta have height to don the cape of the Dark Knight himself... The original Batman Adam West, was 6'2'', and all the varied iterations of him have been at least 5'9'' because someone has to tower over Robin, ya know.

At 6'4'', Liam Neeson is an intimidating person to meet in person (see what we did there?) and it's totally necessary. How else would you believe him when he says, "I have a very particular set of skills?"

Did you know David Hasselhoff was 6'4''? We didn't either. Just goes to show, you shouldn't hassle the Hoff, cause he might deck you. Or at least stare down at you until you feel like an ant.

Alexander Skarsgård is 6'4'' and it makes total sense. The Swedish hottie first appeared on our radar playing an ancient European vampire who loved to tower of Sookie Stackhouse.

But how? Jeff Goldblum just seems so Jeff Goldblum-y, which means he should fit into our pocket instead of towering above us. We still love him though.

Joe Manganiello is 6'5'' because of course he is. Manganiello has forever been tall. And hot. Tall and hot. And he plays a pretty convincing werewolf too.

Aquaman is 6'5''. In other news, the sky is blue, grass is green, and we want a glass of champagne after we're done with work today. We're actually surprised he's not taller. Also, he's amazing.

Part of Tyler Perry's charm whenever he plays Madea is when he towers over and lovingly terrorizes his family. In other words, Perry is tall as heck.

You probably knew Dolph Lundgren was tall, but did you know he has a degree in chemical engineering and went to MIT on a Fulbright scholarship? He's also a screenwriter and director. Just goes to show, you can't judge a book by its cover.

Of course the Rock is tall. And handsome, and charming, and funny, and smart. We knew this. We could smell what the Rock was cooking.

The Wedding Crashers funnyman has always towered over his costars, so we've always known he was tall – we just didn't know he was that tall.

With his movie star good looks, many wonder why Armie Hammer isn't a bigger movie star than he is. Well, ever since the success of Call Me By Your Name, the times, they have been changing. Oh, and he's super tall.