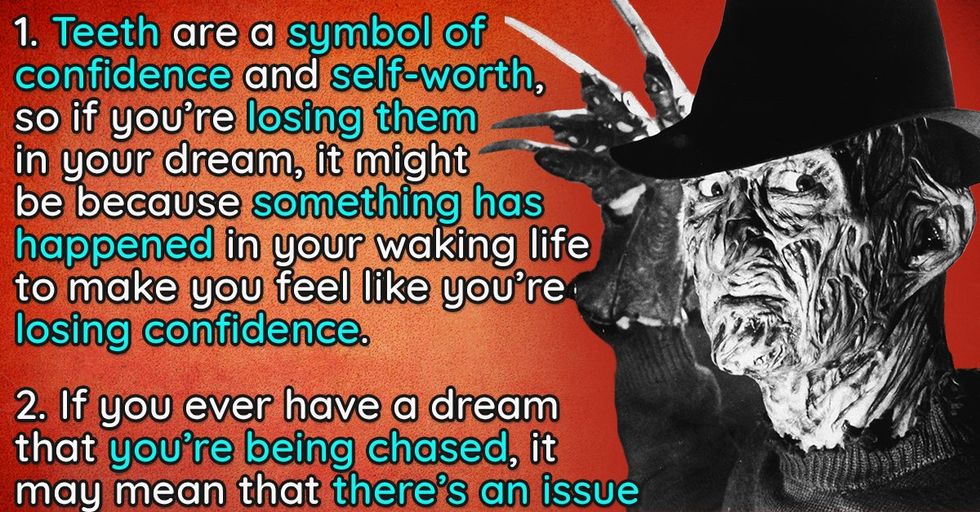 You're walking around in a school when all of a sudden you look down and realize you forgot to put on pants! Also, there's a huge test in your most important class (that you didn't even realize you were enrolled in) that you haven't studied for at all. You're running around trying to find your classroom but are then suddenly unable to take a single step. And then you wake up.

As it turns out, there are several types of dreams that are common to people all over the world. And, of course, because the human brain is a marvelous thing, there's usually a deeper meaning to each of those dreams. Here are 17 of the most common dream types and what they may mean for your waking life:

If you ever have a dream that you're being chased, it may mean that there's an issue in your waking life that you're not addressing directly. Since you won't face it head-on in your waking life, it starts to chase you in your dreams.
While it might be scary within the dream itself, you might be inspired to finally face a problem that's been weighing you down lately. If you find yourself being chased in your dreams, it might help to think about what unresolved problems you have in your life, and whether you can do anything to fix them.

This is a very common dream with a few different interpretations. Teeth may be a symbol of confidence and self-worth, so if you're losing them in your dream, it might be because something has happened (in real life) to make you feel like you're losing confidence. If that's not the case, your dreams about teeth could represent a bad omen like a broken relationship or another significant struggle in your life.

This embarrassing dream comes for us all at one point or another. Showing up to work or school without any clothes typically represents vulnerability and anxiety. The dream tends to haunt people who have recently started a new job or gotten a promotion, probably because they're feeling anxious about the new position.

Vehicles — from cars to trains to planes and everything else that moves — are one of the most common symbols in dreams. However, there isn't one catch-all interpretation that reveals what your dreams about vehicles mean. They could represent a feeling of new-found freedom and control in your life, or possibly your drive and ambition. The actual condition the vehicle is in might be a metaphor for your entire life or your health, so if you see a decrepit jalopy in your dreams, it probably wouldn't hurt to schedule a checkup. But what if you're struggling to drive the vehicle? Read on!

5. Driving out of control.

OK, this one isn't too hard to interpret. If you can't control a car in your dreams, you're probably feeling as though you've lost control of your life, at least to some extent. If you're driving off cliffs in your dreams, you might be making bad decisions in your waking life, too.

Surprise, surprise — this one is also tied to anxiety. If you dream about getting lost, it might be because there's a new situation in your life in which you're worried you won't completely fit in or be able to find your way. Maybe you just started a new job you don't feel 100-percent qualified for, or there's a project deadline you're afraid of missing.

Here's yet another dream that represents your lack of control. It could be something as small as a lack of organization, or — yet again — a sense of uneasiness at work. Have you noticed that none of these dreams tend to mean everything is fine and your life is perfect? Weird how that works out.

You've probably had plenty of dreams that take place in school, even if you haven't stepped foot in a classroom in decades. Dreaming about school could mean that there's a childhood memory that you haven't directly addressed in your life. There may also be some kind of lesson in your waking life that you're struggling to learn, so your subconscious is taking you to school to figure it out.

Yet again, we're dealing with feelings of insecurity, instability, and anxiety. But you probably knew that already, right? However, if you're falling slowly in your dream, that could actually represent a feeling of serenity and finally being able to let go of something that's been troubling you. Finally, some good news! Have you ever had a dream that you're pregnant? Here's what it might mean...

Walking in your dreams might mean that you're making slow and steady progress toward achieving your goals. But if you aren't able to move forward within your dream, that could mean you're not making the progress you feel you should. It's a good time to redouble your efforts and reexamine your goals to see if you can start moving forward again (both in real life and in your dreams).

In dreams, food often symbolizes energy, knowledge, or nourishment. If you dream about eating a lot, it may mean that you're feeling particularly satisfied with some new knowledge, or have a sudden increase in energy (even if eating a bunch of food in real life may have the opposite effect).
Some people believe the appearance of specific foods could have additional meaning. For instance, seeing almonds in your dreams represents wealth and success. Apples, on the other hand, may represent knowledge and wisdom.

Having dreams about sex might just be an outlet for your own sexual desires. But they can also symbolize something deeper, such as a need for connection with others (intimate or otherwise).

Water is one of the most common symbols that appears in people's dreams. It usually represents emotions or the unconscious mind. The way the water actually appears may say a lot about how you're handling your emotions — cloudy, turbulent water means your emotions may be confusing and out of control. Clear, calm water, on the other hand, probably means everything's peachy.

If you dream about death, don't freak out — it's usually not as scary as it may seem. Most likely, a dream about death symbolizes the end of something like a project or even a relationship that has ended in order to make way for something new.