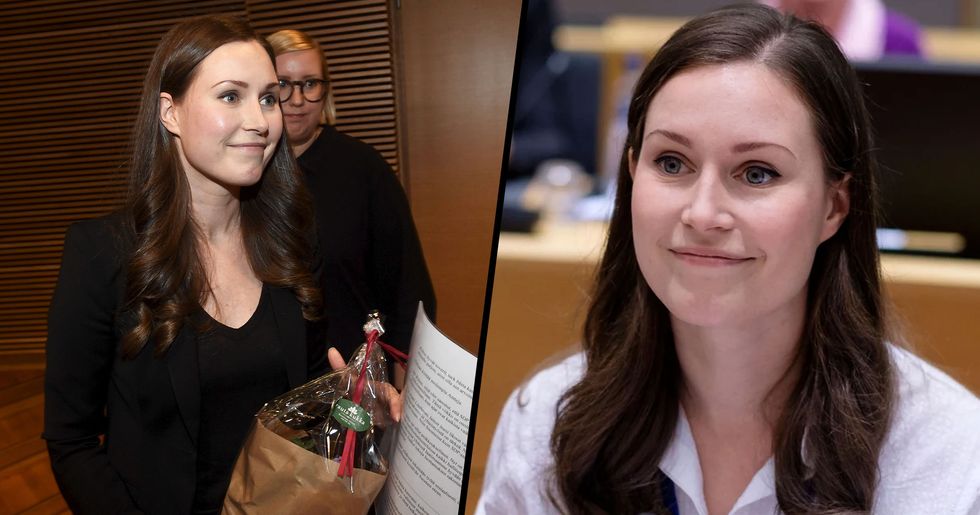 Gender equality is an aspect of society that some people still haven't come to terms with so before I begin, let's just get one thing clear. The definition of the phrase "gender equality" is: "the state in which access to rights or opportunities is unaffected by gender." That doesn't mean men or women rule the roost - it simply means both genders are treated fairly. However, in the grand scheme of things, men are generally favored over women, which is what causes hostility and thus, feminism was born.

However, many years later, due to the hard work of the women that came before us, we get news like this. Finland has appointed a new female Prime Minister.

Scroll on to find out just how the government is now led entirely by females...and to see the internet's mixed reactions to such a pivotal change in the political world.

This is Sanna Marin.

Finland's former transport minister and one of the youngest lawmakers in the country.

However, she has recently made history for something else.

The thirty-four-year-old is set to become the youngest Prime Minister the country has ever seen and she will also be the youngest sitting PM in the world.

That's a big achievement for someone who only started their political career in 2012.

Her rise to power has been described as "quick" but impactful.

It all started when she was appointed the Head of Council for her hometown.

The industrial town of Tampere saw Marin come to power when she was only twenty-seven. The left-leaning member of the Social Democratic Party quickly gained popularity for her confidence and ability to deliver.

The Social Democratic Party reigned strong during the all-important elections.

In April, Finland voted to determine the most powerful party, and in the end, Sanna Marin's came out on top. And after the reign of the previous Prime Minister came to an end, it meant that The Social Democratic Party could appoint their leader.

Why did the former PM resign?

Finland has experienced a turbulent week, wherein a nationwide postal strike led to a unanimous lack of confidence within the current government.

The halt has proved to be detrimental for Finland's economy.

According to data from the Confederation of Finnish Industries, the postal strike will cost companies a combined €500 million ($553 million) in lost revenue.

Things got too messy for the country which resulted in Antti Rinne’s resignation.

Shortly after, Sanna Marin was elected as the woman fit to take on such an important role.

All the major parties in the government are now run by women.

4 other parties in Finland’s coalition government also have female leaders. Thirty-two-year-old Li Anderson heads up the Left Alliance, while thirty-four-year-old Maria Ohisalo leads the Green League, the Centre Party is led by thirty-two-year-old Katri Kulmuni and fifty-five-year-old Anna-Maja Henriksson is the leader of the Swedish People’s party.

Alexander Stubb, who was PM of the country in 2014, tweeted about the change:

"My party is not in government, but I rejoice that the leaders of the five parties in government are female. Shows that #Finland is a modern and progressive country. The majority of my government was also female. One day gender will not matter in government. Meanwhile pioneers."

This is an important fact as typically governments would be built of white men, forty and above and they would make rules that favor people just like them. Ability always reigns supreme, but it's important to acknowledge that we are progressing as a society.

Marin told The Guardian this after she won the vote:

"We have a lot of work ahead to rebuild trust. I have never thought about my age or gender, I think of the reasons I got into politics and those things for which we have won the trust of the electorate."

Apparently, Marin plans on keeping up with the same political program for now...

It focuses primarily on carbon neutrality. It also outlines the importance of the welfare state as she recalled her own experiences during "difficult times" where she and her family benefitted it from it.

She wants to focus on "enabling a safe childhood for everyone and accessible education paths."

"I got to live a safe childhood, have an education and pursue my dreams. Enabling it for everyone has driven me into politics."

The world is now focused on Sanna Marin.

However, many scholars have noted that this wasn't a very surprising turn of events for Finland. The Scandinavian country has always had a strong presence of women in their government unlike many western countries such as the United States, which has never seen a woman take the reigns.

And by 2007, during another election, their numbers made up more than forty percent of lawmakers. They make up forty-seven percent in the term that began in 2019, so these numbers show that it has always been a steady increase.

A professor at the University of Helsinki said that this is a big step towards gender equality.

Tuomas Yla-Anttila, who specializes in political science said that Marin's appointment as leader of the country is "symbolic" for global audiences.

And it seems as if the internet is loving it!

We did need a "new generation of world leaders."

And this user brought out some straight facts.

Finland ranked first on Forbes' list of happiest countries and as you can see, most of these are Scandanavian countries where an equal female presence is prominent in their government. And let's not forget that New Zealand is run by one of the current, most influential world leaders of this generation.

Sanna Marin will be officially sworn in later today. We wish her well as the Prime Minister of Finland. And if you want to read more about females breaking barriers they never thought they would, keep scrolling to read about how influential black Ariel was in the film industry.
20%