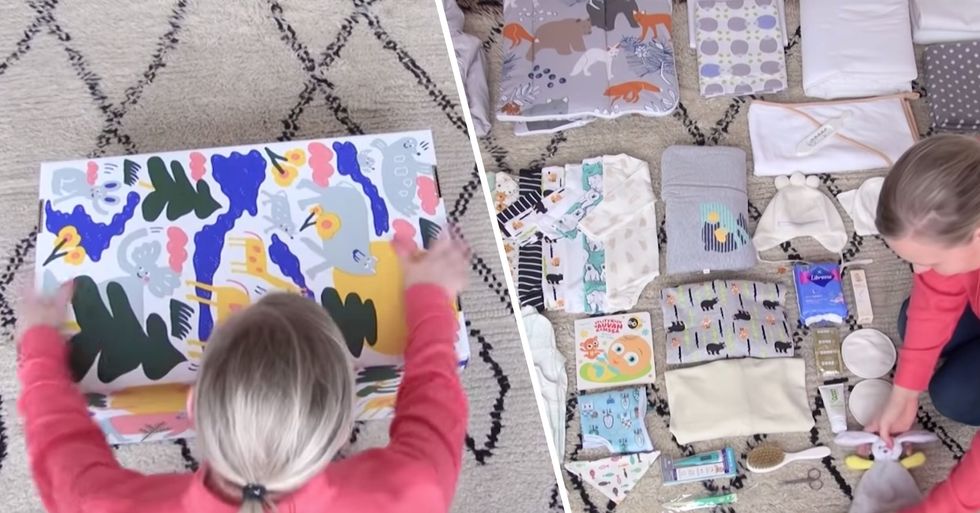 It has just occurred to all the exhausted and stressed out parents here in the States that Finland (you know, the little country sandwiched in Northern Europe?) has been dishing out free baby starter kits to their new parents for the last 7 decades.

Yeah, just when you thought Finland couldn't get any better as a country.

Finland is the place to be these days.

In recent years, the European city has been excelling in more ways than one and is sounding more and more appealing to us every year.

Did you know that Finland was ranked as the happiest country in the world last year?

Yep, Finnish people are happier than anyone else in the world, apparently.

The survey was based on a variety of different factors...

Such as people's generosity, life expectancy, and freedom.

And, as well as being the happiest, the country was also ranked as the safest in the world.

According to the 2019 Travel Risk Map, which assesses the world across 3 categories - medical risks, security and road safety - Finland has the lowest overall threat level.

Oh, and it's the greenest country in Europe.

Nowhere else in the continent has as many trees as Finland does. The country has more forest per square mile than any of its neighboring countries, and the 11th most in the entire world.

And, last year, the country made history...

By becoming the first country in the world to be entirely run by women.

Well, not everyone is too impressed with this wonderful way of life...

Last year, Trump Administration claimed that socialism is what's "worsening" the quality of life in these Nordic countries. You can't please everyone, can you?

So, yeah. Putting Trump aside, Finland has a lot of perks.

As I write this article, I'm becoming more and more tempted to just quit my job and move there myself...

And now, just when you thought Finland couldn't be any more appealing...

News has come in about something completely incredible that they do for all their new parents.

For the last seventy-five-years, Finland's social security institution, Kela, has been sending out baby starter kits.

And all expectant parents in the Nordic country have been receiving these kits completely free of charge.

Now, as any expectant parent will be aware...

Preparing for the arrival of a new baby can be incredibly stressful, not only on your own physical and mental health, but on your bank account too.

And kitting out a brand new nursery is bound to take a toll on anyone's income.

And, even if the financial side isn't your main concern...

Just being fully prepared and equipped for the arrival of your little one can be tremendously stressful.

But Kela has all Finnish parents covered.

The starter pack, which is updated every year in response to feedback from its parents, contains sixty different items.

To health and care supplies, Kela provides an array of different supplies needed for newborns. And, according to their website, everything in the box is chosen "with a view to their significance for promoting the health and well-being of the mother and child."

Known as the "maternity package"...

Any expectant parent can apply, including those who are adopting and even those who aren't citizens, but living and working full-time in the country.

And for those expecting twins or triplets?

They can simply apply for an extra hamper per extra child.

And if you're not interested in the clothes and supplies?

Expectant parents can simply apply to receive the cash amount to buy their own supplies instead. It sounds too good to be true, doesn't it?

You can see a video of one of the hampers below...

For more reasons as to why Finland is the best country in the world, keep scrolling to read more details about their incredible all-woman parliament...