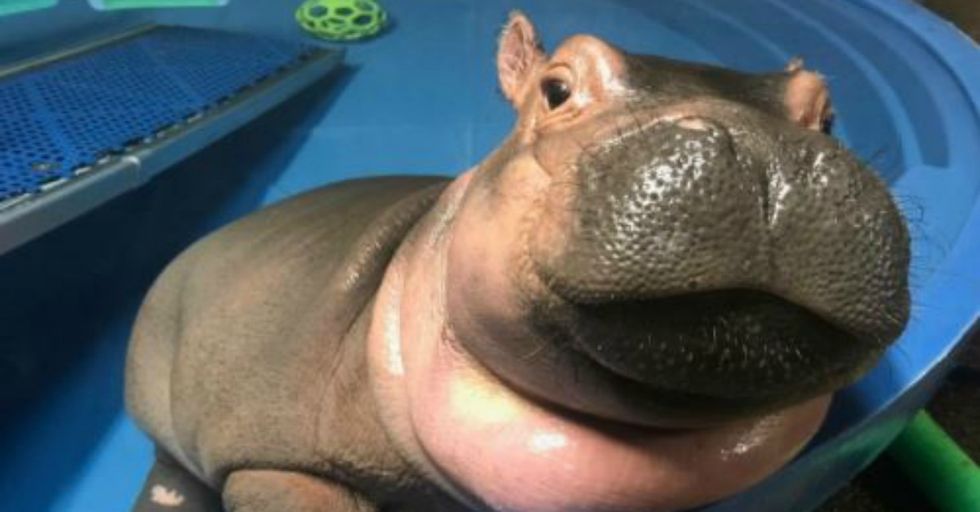 Most little girls dream of the day they'll get engaged. The love of your life down on one knee, a gorgeous diamond-encrusted ring, an adorable baby hippo... all of these things combine for a truly magical experience you'll remember forever.

Okay, so maybe that hippo part isn't so common. But if you're the bride-to-be who got engaged at the Cincinnati Zoo on October 8th, that baby hippo made for one VERY memorable engagement photo.

Have you heard of Fiona the hippo?

If you haven't, then prepare to meet your new obsession. Fiona is a pretty big deal.

She's a 9-month-old hippo who was born prematurely at the Cincinnati Zoo.

Although she was due in March, she came into the world 6 weeks early and weighing only 29 ponds. Pictures of her insane cuteness quickly went viral.

Tourists from as far away as Germany, Brazil, Japan and Australia began booking their trips to Cincinnati, Ohio to see the premature hippo that captured their hearts. And can you blame them?

Fiona can be a pretty big ham when it comes to visitors.

She can often be seen pressed up against the glass in an attempt to better interact with her many admirers. Just look at those precious fat rolls!

Called "Fiona the Baby Hippo", the page explicitly states that it's a "parody account and is not associated with the Cincinnati Zoo". Oh, and it also has 10.8K followers. Considering Neve Cambell only has 232 followers on Twitter, this is pretty impressive. (Or maybe just sad for Neve.) But this was just the beginning...

On October 8th, Nick Kelble and Hayley Roll made a special trip to the zoo.

They were celebrating their 1-year anniversary, and, while Hayley thought it was simply an anniversary trip, Nick had something far more exciting planned...

"Nick, my boyfriend, and I were waiting in line to get our photo taken with Fiona and I gave my cell phone to someone to take the photo and when I turned back around..."

"Nick was on one knee proposing," Hayley told The Daily Buzz. It wasn't until later that they realized the epic photobomb from Miss Fiona.

The pic went viral, and the internet lost its collective mind at the hilarious cuteness.

Seriously, who wouldn't cherish this photo forever? Their marriage has been blessed by an adorable sea creature too pure for this world.

Along with the proposal pic, the couple also got three more pics with the famous hippo.

While Hayley and Nick look happy and in love here, Fiona appears less than impressed. But, considering her worldwide popularity, she's probably seen some crazy stuff in her short 9 months.

Based on their engagement, we're guessing the wedding will be a truly spectacular affair.

We're hoping the two will incorporate Fiona into their big day. A hippo flower girl would really liven up a wedding ceremony.

Hayley told the Daily Buzz that no one at the zoo knew about the engagement beforehand.

This means that Fiona just sensed that something BIG was about to go down. “We’re so happy Fiona could be there on our special day. Here’s to many more years of going to zoos with you," Hayley captioned the Instagram photo. Best. Engagement. Photo. EVER.