Fiona the Baby Hippo Might Be the Cutest Thing We've Ever Seen, and We Have the Pictures to Prove It | 22 Words 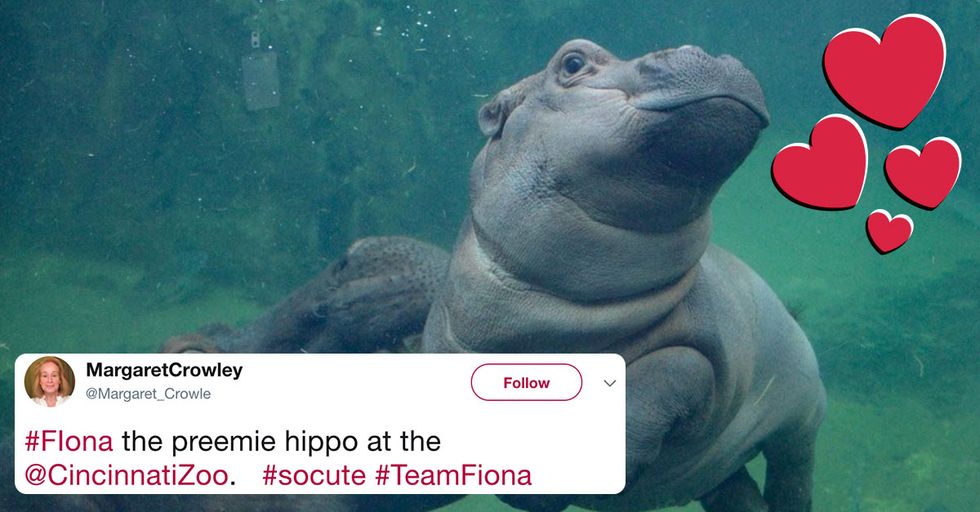 Fiona the Baby Hippo Might Be the Cutest Thing We've Ever Seen, and We Have the Pictures to Prove It

Early on the morning of January 24, 2017, the Cincinnati Zoo and Botanical Garden received an unexpected visitor – a baby Nile hippo, born six weeks early. She was a tiny thing - at only 29 pounds, she was half the size of a regular baby hippo.

Her name was Fiona, and she stole America's heart.

This is Fiona the hippo. She is the cutest thing on the internet. Don't even try to argue.

Just look at those cute cheeks - both the ones at the front and the back! And that tiny stub of a tail. We dare you to find anything cuter. Double-dog dare you.

Fiona has a very special namesake.

Zookeepers gave Fiona her name because she had the most adorable little ears ever - ogre ears! Fiona was a hippogre. An ogrippo! *Sigh* We tried.

Fiona was born six weeks premature, which means she was TINY for a hippo.

Zookeepers feared she wouldn't survive and instituted round the clock care. They held her and snuggled her and bathed her. They made sure she got all the baby hippo naps she needed and the baby hippo snacks, which included milk and pre-chewed hay.

After all, Fiona was important.

Fiona is the first hippo born to the Cincinnati Zoo in 75 years. Her dad Henry came from the Dickerson Park Zoo and her mom Bibi came from the St. Louis Zoo. She's also the first Nile hippo captured on ultrasound.

The zoo recorded all of Fiona's milestones.

What are bubbles?Fiona isn’t sure!Caring for our animals includes providing them w/enrichment & introducing them to… https://t.co/wQiiASI0U2
— Cincinnati Zoo (@Cincinnati Zoo)1495907017.0

By the time Fiona started exploring her zoo habitat, everyone wanted to meet her.

People came from all over to see Fiona. She was an internet celebrity. Her story had inspired millions and it's easy to see why. Fiona beat the odds, and she did so while being so darned cute, you can't help but want to hug her and squeeze her.

People played it over and over again, and we totally get why. There she is, just swimming along, minding her own business, and TOOT! So rude! We're totally offended on her behalf that bubbles chose to come out of her behind.

When Fiona gained 500 pounds, it was a moment of celebration.

The average adult female hippo is about 3,000 pounds. Fiona ticking 500 meant that she was growing normally for a hippo. The preemie had beat the odds, and she was going strong.

People loved Fiona so much, the zoo made a show about her.

It's called The Fiona Show, and it's LIT. Tune in to watch Fiona's progression from preemie to fully realized aquatic goddess. The trailer alone has over 10 million views. Watch it and try not to cry as you see baby Fiona slowly grow into her own.

Fiona is also the star of a children's book.

The best time to catch a glimpse of Fiona is before 3pm. She's been heading inside in the late afternoon so Henry &… https://t.co/VbcvSYa92t
— Cincinnati Zoo (@Cincinnati Zoo)1506528128.0

Zoo director Thane Maynard will be writing the book. The Cincinnati Examiner had all the details: "Saving Fiona: Science, Social Media, and the Story of a Baby Hippo" is set for release on Jan. 22, 2019, just in time for Fiona’s second birthday two days later, by major publisher Houghton Mifflin Harcourt Books for Young Readers." But that wasn't all...

Fiona has put the Cincinnati Zoo on the social media map. In 2016, the zoo's videos had only eight million views. Fast forward to 2017 and Fiona's introduction. The Zoo has had over 120 million views so far just because of Fiona.

Fiona is one in a kind, literally.

Fiona's not aggressive towards her care team, but she's so big it's not safe to be in her space on a regular basis:… https://t.co/YAjtyEdMxj
— Cincinnati Zoo (@Cincinnati Zoo)1506620904.0

Fiona has been hand-reared by humans since the day she was born, so she is relatively docile. The average Nile hippo, however, is EXTREMELY aggressive and ranked among the most dangerous animals on earth. Hippos routinely capsize boats and kill people, so while we love Fiona, we must warn you that most hippos are not cute and cuddly animals, and they are VERY fast both in the water and on land.

We're just gonna leave you with this...

Isn't it the cutest thing you've ever seen? We dare you to look away. Impossible, right? That's the power of Fiona. You're welcome.