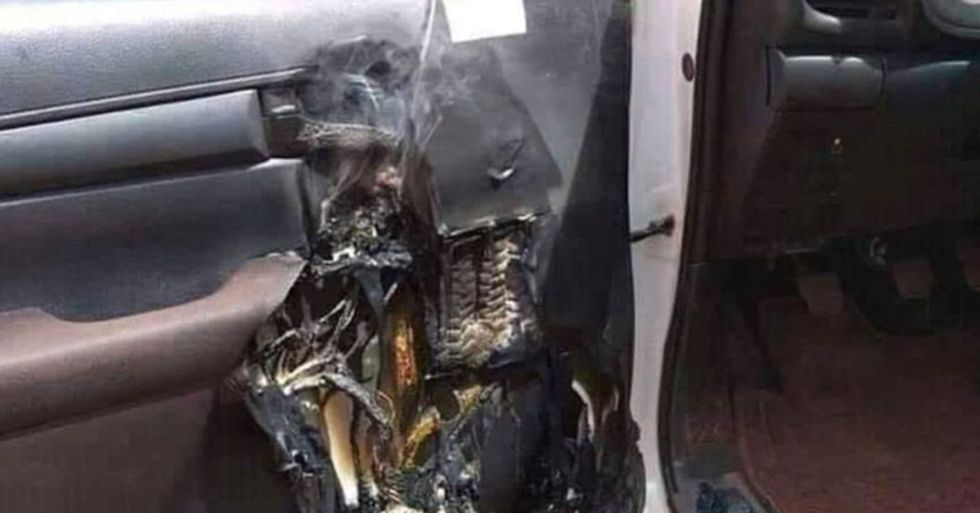 Given that many of us are trying to prevent the spread of germs, the use of hand sanitizer has increased.

And whilst we might want to carry it with us all the time, there is one place we shouldn't be leaving it.

The on-going pandemic has spread around the world.

With the majority of countries now infected.

And here in the States it is no different.

In fact, we are one of the worst affected countries.

The amount of deaths we have seen is devastating.

Our thoughts are with those who have lost loved ones.

Around the world there have been millions affected.

We have been trying to protect ourselves from the virus.

And in the hope of preventing the spread of germs.

So much so that some shops even had to limit the amount people could buy.

And although the panic buying has calmed down now.

Hand sanitizer is still something many of us carry with us regularly.

Especially when we are out and about.

It's pretty helpful to keep a bottle in the car isnt it?

Helpful... but not safe.

A fire department in Wisconsin has warned us against keeping any bottles of hand sanitizer in our cars.

Especially as the temperatures are beginning to rise.

Because, although we might be surprised, it is highly dangerous.

They wrote: "Let’s start today with a little education! "We’ve chatted in the past about clear water bottles being kept in your vehicle when the weather is warm.

Attached to the post was a photo of a burned-out car.

Burned-out due to a bottle of sanitizer that caught on fire.

The post also added "Keeping it in your car during hot weather, exposing it to sun causing magnification of light through the bottle, ----and particularly being next to open flame while smoking in vehicles or grilling while enjoying this weekend----can lead to disaster."

It's something you wouldn't think of isnt it?

Who would have thought a bottle could cause so much danger.

Well, fire departments have actually been warning people for years of the risks.

Because although it's rare, it does happen.

Back in 2017 David Richardson with the Midwest Fire Department said “The sunlight will come through when it’s filled with liquid, and act as a magnifying glass as you would with regular optics."

Speaking to KFOR-TV, he continued: “It uses the liquid and the clear material to develop a focused beam and sure enough, it can actually cause a fire, a combustion."

It one of those things we might think will never happen to us.

But you can never be sure!

And it's better to be safe, than sorry.

Keep scrolling to see how one shop thought of a genius idea to stop buyers hoarding hand sanitizer...