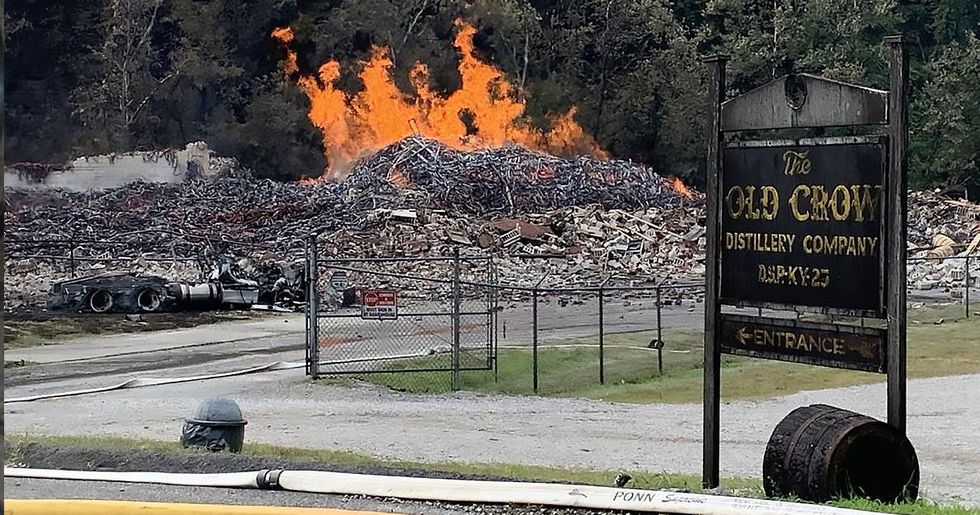 If you're as big a baby about alcohol as I am (I think everything besides Barefoot wine spritzers is yucky), you might not know what differentiates the different types of whiskeys. The primary difference is actually very simple: its location. Scotch comes from Scotland, Tennessee Whiskey comes from (surprise!) Tennessee, and bourbon — the kind of whiskey Jim Beam deals in — comes from Kentucky.

And since specific kinds of whiskey production are handled in these centralized locations, the whiskey biz is more susceptible to disasters than most other products. That means that, when something goes haywire in one of these major whiskey spots, it could devastate the entire industry.

And that's exactly what happened this week, as a massive fire at a Jim Beam warehouse threw a serious kink in their bourbon production process. How will it affect bourbon's availability in the future? Will there be enough bourbon to go around?

The Beam family has been making whiskey since 1795.

Starting out as a true family business, the Beams have been making bourbon since America was still a teenager. The first whiskey-maker? Jacob Beam. Not Jim Beam. Which is frustrating.

What a baller name for a whiskey! I am shocked that Jim Beam doesn't have a whiskey out today called Old Jake Beam Sour Mash. The "Old Jake Beam" half makes it sound folksy, while "Sour Mash" makes it sound like the choice of a tough guy, a man who don't need none o' that sweet, smooth, coward's drink.

And the first distillery was called "Old Tub."

It is unclear as to whether there was a building that ol' Jake Beam called "The Old Tub" or if he was just literally making whiskey in an old tub.

But the company was rebuilt under James B. Beam.

See, this is why the company isn't named Jake Beam. After the 21st Amendment was passed in 1933, ending Prohibition in the United States, it was James Beauregard Beam who saved the company.

James was the Beam who rebuilt the business after Prohibition.

You can't help but be eternally grateful to a man who fought through a 13 year period where the entire federal government has declared your business illegal.

The Beam family is clearly passionate about putting good bourbon out into the world.

The Beam family is still involved in the company today, with Fred Noe, great-grandson to the founder and seventh-generation Beam to become master distiller of the bourbon, a title he still holds today. The Beams wouldn't keep handing that title down to their kids if it's just a gig.

They have to be devastated, then, by the fire that happened in one of their Kentucky warehouses.

As reported by The Washington Post, a fire broke out at a Jim Beam Warehouse in Versailles, Kentucky late on the night of July 2nd.

Which feels like a lot of bourbon, right? And again, with all bourbon by definition coming from Kentucky, this is one of the dangers of keeping all your bourbon eggs in one barrel-shaped basket.

One barrel of bourbon contains 53 gallons of bourbon.

Runoff from the fire began flowing into the Kentucky River.

The runoff, which The Washington Post described as "a mixture of whiskey, hose water, barrel residue and charred debris," began to contaminate the nearby Kentucky River. Obviously, that has huge environmental implications.

The main risk was a "severe fish kill."

Isn't it nuts that there's a term for when a massive amount of fish die? Does it happen enough that they needed a shorthand for it, besides, "Yo, a bunch of fish are dead. What the hell, man?"

There'sstill a lot of potential for environmental damage.

And you can tell, can't you? It just looks so... toxic. The idea is, the bacteria in the water would swarm to the alcohol. Since those same bacteria are responsible for producing the oxygen in the water, the fish would all... drown.

... but there wasn't a whole lot they could do. Alcohol that is 80 Proof or more (like, for instance, bourbon) can catch fire. This fire had a steady stream of fuel keeping it ablaze.

And water would only carry the flames farther.

The fire was so hot that even spraying it with water would actually push the fire away, causing it to spread faster.

So the firefighter let the fire burn itself out.

That means that firefighters, who are always so quick to rush headfirst into burning buildings because they're trained to take action, had to temper their instincts and just watch.

It was better to let it all burn away.

Once the fire started, there was nothing that could be done. It must be frustrating for everyone involved — the firefighters, the city, Jim Beam themselves. They could all probably use a drink.

No one was hurt.

The company that owns Jim Beam today, Beam Suntory, put out a statement reading, “We are thankful that no one was injured in this incident, and we are grateful to the courageous firefighters from multiple jurisdictions who brought the fire under control and prevented it from spreading."

So what caused the fire in the first place?

Speaking to local news station WKYT, the Woodford County Emergency Management Director Drew Chandler suggested lightning could be the culprit, but that at this point, they don't know for sure.

It's honestly surprising that this doesn't happen more often.

A whiskey distillery is basically a room full of those red barrels from video games — you shoot them once and they explode. And if they're close enough to another red barrel, that one explodes too.

The total cost of the fire, according to Fortune, could be as high as 300 million dollars.

It's always crazy to me when giant companies lose what feels to me like infinite money, but then they just write it off and keep doing their thang.

The lost whiskey was in the process of aging.

While the whiskey was insured, Jim Beam still needs to spend years and years aging bourbon. It's not like the time that went into aging that bourbon can be recovered.

This could set production back.

Obviously Jim Beam isn't going to start disappearing off the shelves, but in a couple years time, when the bourbon that was supposed to be ready just isn't there, there's a chance that we'll see supply — and ourselves — dry up.

Will we see a bourbon shortage in the coming years?

How will I make it through the holidays with my family?

The idea of spending the holidays with my family while actually cognizant is a waking nightmare. Getting loaded the first night everyone's all together just to make it through is a more important tradition than opening one present on Christmas Eve.

What will detectives throw back to show they've hit a dead end on the case?

When your only lead goes bust, and you start to see this city for what it truly is, and you start to wonder if it's even possible to find whoever killed that fine girl whose only mistake was walking into your office, yeah, you'll want a shot of bourbon. Make it a double.

But the whiskey that went up was "young whiskey."

Jim Beam needs to sit in a barrel for a minimum of four years, but it sounds like the whiskey that went up in flames wasn't on the verge of hitting the market.

So there will still be plenty of Jim Beam to go around.

Our family Christmases and investigations into the missing Maltese Falcon that's turned into a disgusting look at the corruption that's always lurked beneath the surface of this city? They're gonna be okay!

And if Jim Beam can survive Prohibition...

... when the full weight of the United States government declared their entire business unacceptable...

When a business has been in your family since 1795, you're not going to let one warehouse fire stop you. Of course, no one would blame anyone at Jim Beam if after all this, they needed a good, stiff drink.