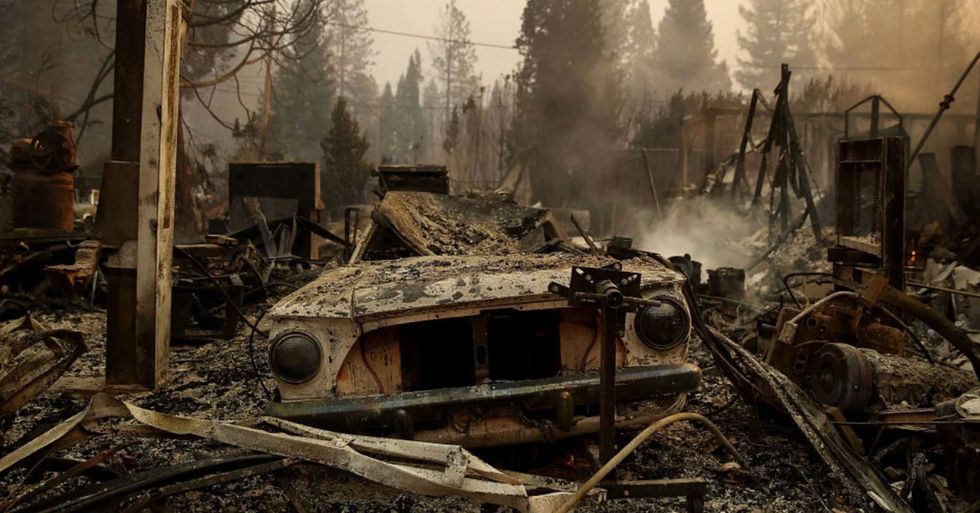 A firefighter who has been working tirelessly to tackle the California wildfires lost his entire family in a house fire whilst he was out at work.

This is an unbelievably tragic loss...

Right now, we as a country are suffering immensely.

Wildfires have been tearing through California and they are showing absolutely no signs of slowing down.

We're the ones who are suffering.

The deadly flames have so far burnt over 2 million acres and sadly, there is no end in sight.

There's no hope in sight...

And now, the states of Washington, Utah, Oregon, and Colorado are battling intense heatwaves caused by the wildfires... including a few more blazes that have been sparked.

In Oregon and Idaho, fires close to power lines shut off the electricity...

Which caused misery and chaos to thousands of homes and businesses.

It has also been reported that the town of Malden in Washington has been "completely decimated".

Deputies told 4 News Now that seventy-eighty percent of the homes in Malden have been destroyed by a fire sweeping through the area. Level 3 Evacuations were issued for residents in the area, but within hours, most of the town had burned to the ground, with powerful winds pushing the flames and smoke southwest.

Malden has a population of roughly 300 people...

And at least 1 person has been reported to have passed away from the devastation.

And just when we thought things couldn't get any more tragic than they already are...

The story of a brave firefighter has broken hearts all around the world.

Raul Garcia-Santos works as a firefighter in Benton City, Washington...

And like many, he has been tirelessly tackling the uncontrollable flames that have engulfed the majority of the state.

On the 27th of August, Raul was out in Okanogan County battling the Palmer Fire when disaster struck.

His wife, Marcaria Garcia-Martinez, and their daughters Luz, seventeen, Michelle, 6, and their son Luis, fifteen, were caught up in a terrible situation when the trailer they were sleeping in was engulfed in flames from a nearby wildfire that came out of nowhere.

The fire was so hot that it burned another trailer that was close by...

But how were the family unable to escape? Chief Duncan told the media that while Benton County Fire Protection has programs that provide free smoke detectors, Mr. Garcia-Santos' trailer was either not equipped with ones that were working or they had not been fitted at all.

There was nothing that could be done for the family.

Benton County Coroner William Leach confirmed that the cause of death was asphyxia due to smoke inhalation.

It's an unbelievably tragic loss.

"It's a very sad case and it reiterates the fact that smoke detectors save lives," Chief Duncan said.

A GoFundMe Page has been set up to help Raul through these unimaginable times.

The page reads: "A family of 4 passed in a house fire they have no family here in the state of Washington just close friends I’d appreciate any help that we could get."

Our deepest condolences go out to Raul and his family during this deeply distressing time.