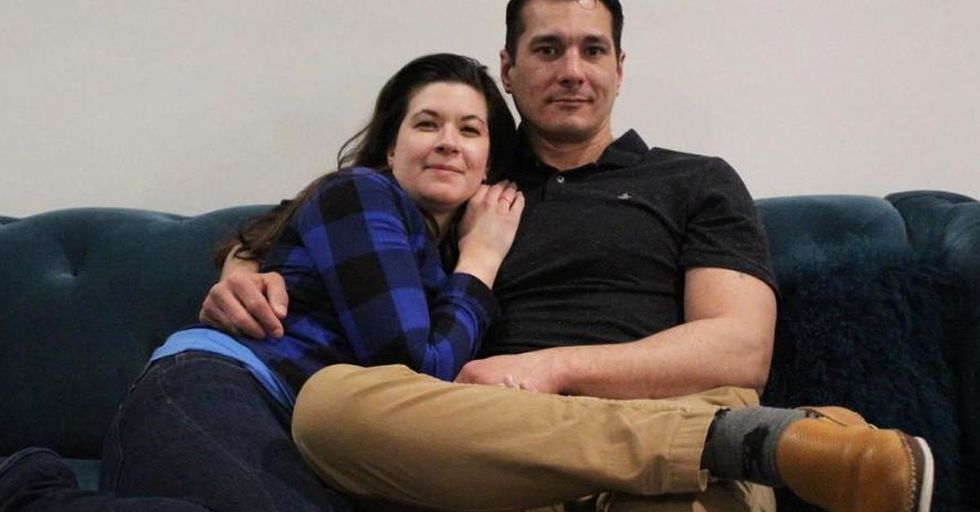 They say love knows no bounds. Think of all the greatest love stories out there – Romeo and Juliet, Noah and Allie, Rose and Jack, Kim Kardashian and her selfie camera...the lists go on and on.

Our world is full of ups and downs, but one thing remains. Love. Songs, movies, books are written about it and it's something we all experience. Whether it be a longing romantic love or the deep familial bond kind of love, it's all around us all of the time.

And then there is the type of love that blends the two I just mentioned and you're left scratching your head thinking, "Huh?"

Now, I'm not trying to judge love. Love is love. Have I said love enough times already? But for real, love who you want! But falling in love with your first cousin and petitioning to legally marry them?

Well, that's certainly an interesting and different type of love.

People fall in love every day.

Love makes the world go round and all that. Who doesn't love love?

To all my fellow romantics, can I get an amen?

The world can sometimes feel like a cynical, negative place so what's the harm in celebrating romance? It's been around forever!

It's something that colors thousands of years of poetry, art, and life.

Who are any of us to judge love? You should be able to fall in love with whoever you want, right?

But here's a bizarre situation for you to think about.

What if you fell in love with your first cousin? Yikes, right? There's bound to be a few issues with that.

Well, that's exactly what happened to a Utah couple.

And they're taking it a step further – they're petitioning to make it legal for them to marry each other.

The couple aims to get 1,000 signatures on the petition.

First cousins in love with each other petition to get legally married in Utah https://t.co/E8EYUcTLGy https://t.co/DQMolVy0wF
— CBS News (@CBS News)1551891635.0

"My first cousin and I have been in love with each other our whole lives but we are prohibited from marrying in the state of Utah where we live," writes Angie Peang on the website. "We believe that the law is outdated and it needs to be changed so that we can socially legitimize our love."

As of Wednesday, the couple has 145 signatures and counting.

Peang spoke to CBS News about how the pair fell in love.

"We just always played a lot," she said. "We went into a closet and we were kissing and dancing together. It just felt really natural."

Lee told Peang's mother that he planned to marry her when they grew up.

Peang's mother then informed Lee that they wouldn't be able to get married, but they could remain friends. CBS News writes that the cousins were caught kissing each other at a family function.

Peang reflected about that particular event.

"We got in trouble," she said. "After that, we were kind of kept apart."

Both Peang and Lee were married to different people.

Peang had three children, but eventually, both marriages ended in divorce. But their lives (and being in the same family) brought them back together.

The cousins hadn't seen each other in a decade but reconnected at their grandmother's house last year over the holidays.

The love and connection was still there.

"We felt a lot of love and missed each other over the years," Peang told CBS News. "We decided that we were just going to be open with our love."

They feared what their family would think.

"It was really scary to think about how our family would react because they are conservative Mormons... we thought we might be excluded," Peang explained.

Predictably, the couple got mixed reactions to their declaration of love.

Her parents feel as if their relationship will "threaten the family's identity." Peang's youngest kid is okay with the relationship.

But Peang's two elder daughters are weirded out by it and feel that it's not okay.

But Peang told CBS News that the two older girls eventually came around to the idea. "They started to come around eventually and when we told them we were getting married they were like, 'OK, we're cool [with it],'" Peang explained.

The cousins found a hiccup in their journey to the altar.

The cousins tied the knot at a Colorado courthouse. Lee was excited and posted on Facebook about their nuptials.

"I am officially a married man with a bright future," Lee wrote.

"I am completely ecstatic about finally being married to my Angie."

Most states do not allow marriage between first cousins.

There are, however, several states that do allow it. Here's a fun fact: Utah only allows marriage between first cousins if they're both over 65.

Even though they're married, Peang and Lee want the law changed so their love isn't stigmatized. "We hope to spread awareness about our situation, and we hope with this awareness and education we can shift people's perspectives," Lee said told CBS News.

"It really isn't something they should be afraid of or against," he continued.

"Getting married in Colorado was one step and gathering the signatures is another one," Peang explained. People are leaving supportive comments on Peang's petition.

Marie B. from Florida doesn't care that they're cousins.

"Love is love. Everyone in love should be able to marry. Besides who cares if they are cousins," she wrote on the petition website.

"Cause there are not brother different mom and dad it’s ok to get married," Rand wrote.

Pamela S. posted that she is currently in love with her cousin.

"Me and my cousin are in love and have been since we was kids. We want to get married," she wrote.

Tonya L. from Kentucky posted that she's in the same situation as Peang and Lee.

"Im currently with my first cousin and live in Kentucky, we are dealing with same thing, its not fair, you love who you love," Tonya wrote.

Despite the polarizing relationship, the signatures are rapidly increasing.

It would appear that there are plenty of people who find it legally fine to fall in love and marry your cousin.

It's quite the discussion.

It also makes you think of those situations where people didn't know they were related and fell in love. How do people deal with something like that?

Regardless of your own personal opinion on the matter, it seems that Peang has found a good number of supporters, and of course, some haters.

Do you think they'll get to 1,000 signatures by the end of the week? It certainly looks like a possibility.

Cassandra K. signed the petition even though she personally thinks it's gross.

"I might think it's gross and never do this, but laws should not define love when it comes to two consenting adults," she wrote on the petition website. What do you think? Do you think it should be legal to marry your first cousin? Let us know!