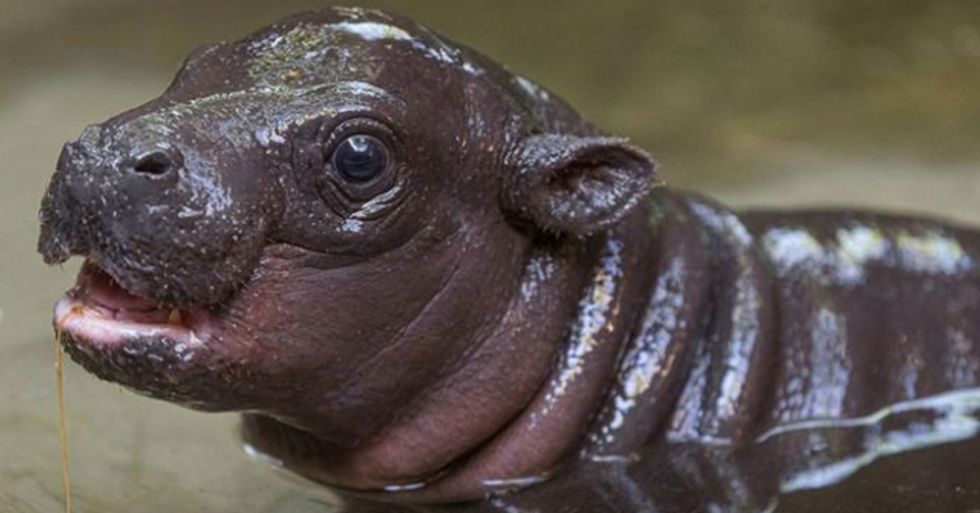 For the first time in thirty years, an endangered pygmy hippo has been born at San Diego Zoo.

Keep scrolling to read more about their exciting new arrival, and what it could mean for the future of the species...

This footage is adorable.

Last month, the world just got a whole lot better.

On April 9th, San Diego Zoo welcomed the birth of an endangered pygmy hippo, officially putting an end to their thirty-year wait for a new arrival of the species.

It is truly remarkable news...

Because, over the last few years, the numbers of pygmy hippos in the wild have been dwindling.

As of 2010, the species has been listed as endangered.

Pygmy hippos, who are known for being the miniature versions of their much larger relatives, have become endangered as a result of - you guessed it - human activity.

For decades, their natural habitats have been gradually destroyed.

These hippos are native to 4 countries across West Africa - Côte d’Ivoire, Guinea, Liberia, and Sierra Leone - but the forests that shelter them have been cut down or burned away, and the rivers in which they swim are now heavily polluted.

They have also been mercilessly hunted.

Pygmy hippos have long fallen under the trap of hunters and poachers, who slaughter the defenseless animals for their meat.

It is one of the more devastating side-effects of our impact on the planet...

And, today, it is estimated that as little as 2000 of these small hippos remain in the wild.

We have single-handedly driven these poor animals to the brink of extinction...

So it is our responsibility to bring their numbers back to life.

A tremendous amount of conservation work has been put into the species over the years.

Thankfully, pygmy hippos have adapted well to life in conservation, and around 350 are currently estimated to reside world-wide.

But, for one zoo, breeding these animals has proven to be a little tricky.

San Diego Zoo welcomed their first pygmy hippo, Tiny, in 1941. Over the next couple of decades, the zoo would become home to several more of the hippos, but it took them until 1970 to welcome the birth of their first pygmy, Holly.

Over the years, the zoo has had thirteen pygmy hippo births...

But, for the last thirty years, they have experienced a drought in their breeding efforts.

The hippos just haven't been in the mood for it...

It's been an incredibly dry period for these unmotivated hippos...

But, last month, all of that changed.

And, my goodness, he is adorable.

And, going by how cute he is, he was well worth the wait.

The latest addition to the pygmy family arrived on April 9th at around 9 am...

And, for a first-time mom, Mabel has risen extraordinarily to her maternal instincts.

"Mom and calf are doing very well," the zoo said in a statement, adding, "the calf is nursing and getting lots of attention from the first-time mother."

Mabel gave birth to the calf in an indoor habitat built especially for the pygmy hippos...

And wildlife care specialists reported that the calf, which is yet to be named, stood, walked, and followed Mabel around within just a few hours of being born.

And, since the news broke of his birth, people's hearts have been melting.

I, too, would die for this baby pygmy hippo.

The zoo posted a video of Mabel and her calf frolicking in the water...

Where the calf demonstrated his natural adaptations and instincts as a pygmy hippo — closing his nostrils and to holding his breath underwater, mainly.

All of your ideas are welcomed. For more amazing news on our endangered species, keep scrolling to read about the staggering number of turtles currently hatching on our beaches...