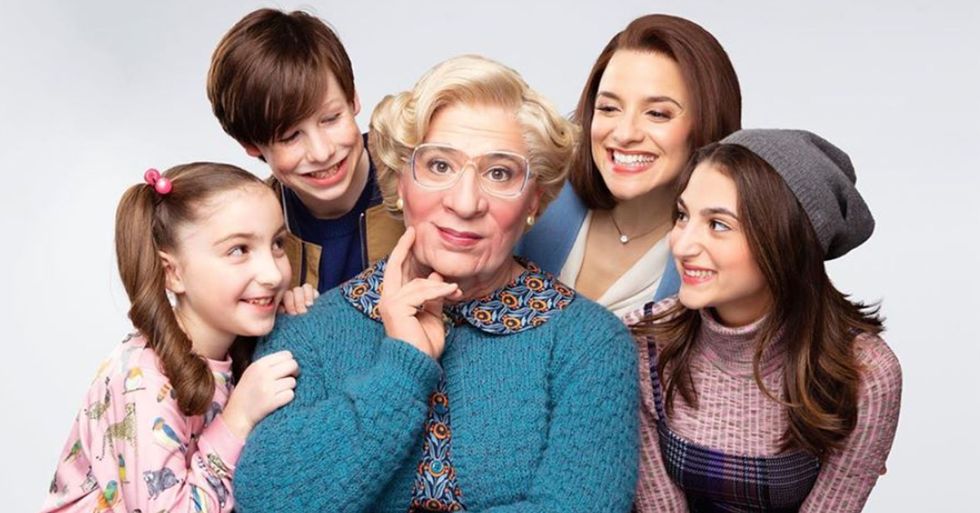 First Look at New 'Mrs. Doubtfire' Has Been Revealed

Mrs. Doubtfire is well and truly a family classic that will never get old.

Of course, the amazing Robin Williams was probably the reason the movie was so iconic and many of his fans enjoy remembering the late actor through his incredible sense of humor.

But now, news has emerged that Mrs. Doubtfire is being remade into a musical, and the first look has just been revealed.

Robin Williams was, and still is, one of our country's most iconic actors.

Before he broke into the world of acting, Williams began performing stand-up comedy in San Francisco and Los Angeles during the mid-1970s, and is actually credited with leading San Francisco's comedy renaissance.

He went on to star in dozens of iconic movies...

With classic titles such as The Dead Poets Society, Jumanji, Good Will Hunting, and Good Morning Vietnam under his belt, Williams quickly grew to become one of the most famous and unique actors that Hollywood has ever seen.

Yet despite his jolly and comedic demeanor...

Williams had plenty of his own demons to battle. The actor had famously relied on drugs and alcohol to cope with the pressures of his stand-up comedy shows and had suffered on-and-off from depression for years, which some think was triggered from his less successful movies in the naughties.

And, heartbreakingly, these battles got the better of him.

In May 2014, just a couple of months before his death, Williams was diagnosed with Parkinson’s disease, a degenerative disorder that impairs motor functioning. Doctors assured him that they had drugs that could control the tremors and that he likely would have another “10 good years." But, combined with his well-documented history with depression and anxiety, the diagnosis proved to be too much for Williams.

He was taken from us far too soon.

On August 11th, 2014, the heartbreaking, yet horrifying news emerged of Williams' death by suicide. He was found hanged in the spare bedroom of his California home by his assistant and was pronounced dead at the scene.

The world went into shock.

And all the questions came spilling out - but he didn't seem depressed? Robin Williams was really funny, he couldn't have taken his own life?

Williams was evidence that, no matter how big someone's smile is, you never know what's going on behind closed doors.

And he was proof enough that depression doesn't discriminate. Many people wondered just how someone with so much going for them could possibly feel depressed to the point of suicide. With all the money, fame, family, and success they have, to be depressed surely makes no sense? But depression doesn't work like that and can affect even those with the biggest of smiles.

But his legacy lives on in his work...

Williams brought joy and laughter to millions of people all over the world, and many of his movies remain firm comedy favorites to this very day.

And perhaps the most popular?

Of course, it's Mrs. Doubtfire.  Only Robin Williams could turn the ridiculous concept of a father disguising himself as a conservative old lady into one of the most iconic movies of our time.

The movie is the ultimate heart-warming comedy.

Released in 1993, the movie follows the story of Daniel Hillard, a free-lance voice actor, and his battle to win back his estranged wife and, ultimately, win back the custody of his 3 children.

In order to see his kids, he comes up with the ultimate disguise...

As the Scottish nanny, Mrs. Doubtfire. Through his new disguise, Daniel is able to see his children every day and goes on to win his ex-wife back... by sabotaging her potential new relationship through the persona of the feisty and bad-mouthed old lady.

And Williams went on to win a Golden Globe for his hilarious performance.

It is hard to imagine anybody else stepping into the shoes of Mrs. Doubtfire...

But things are about to change.

A Broadway musical stage production of the timeless movie is coming...

And we only have a few weeks to go until the show begins on April 5th.

Theater actor Rob McClure is taking on the role of a lifetime...

And he will be putting on the face mask, the corset, and the Scottish accent... just as Williams did in 1993.

McClure has spoken about how much of a challenge taking on this role is...

When speaking to EW, he said, "Euphegenia Doubtfire takes a village. I’ve got an entire Indianapolis 500 pit crew back there. My dressers and make-up team are superheroes. One of the most thrilling differences between the movie and the Broadway show is that we are doing this in real-time."

But he is also very excited for the musical version...

"When Daniel Hillard runs into the other room and emerges as everyone’s favorite Scottish nanny 18 seconds later, our director can’t yell cut and send me to a trailer for five hours. We’ve got eighteen seconds. I can feel the audience sweating with me! 'IS HE GONNA MAKE IT?!?' The stakes are so high! It makes for electrifying theatre," he went on to say.

Many have pondered McClure's ability to step into the shoes of Robin Williams...

But according to Variety, "as a recovering screw-up and alternately a sage housekeeper, he deftly honors Williams’s dexterous two-fer performance without slavishly imitating it. Whether Daniel is mending fences with his kids, cavorting with puppets, or, as Mrs. Doubtfire, doling out bawdy wisecracks and spoonfuls of advice in a brogue-ish accent and dowdy duds, McClure brings winning sincerity and his own nimble, multi-voiced comic chops to the effort."

The musical has opened in preview today...

And we must say, it's looking pretty good so far!

But of course, many of Williams' fans have been expressing their lack of approval over the "remake."

But is it really a remake of Williams' 1993 version?

It is merely an adaptation of the original movie...

And it is understood that the musical version is not looking to replace Williams' version of Mrs. Doubtfire at all.

And many are still shaking their heads in disapproval over the adaptation, with comments being left online such as, "Literally why...? Like I loved Robin Williams and I loved Mrs. Doubtfire but I don't think it was good enough for a remake especially without Robin."

Only time will tell to see how the musical will go down with fans...

And we personally believe that the adaptation is a wonderful tribute to the late Robin Williams - who we are sure would have given his nod of approval! Make sure to stay posted for further updates.