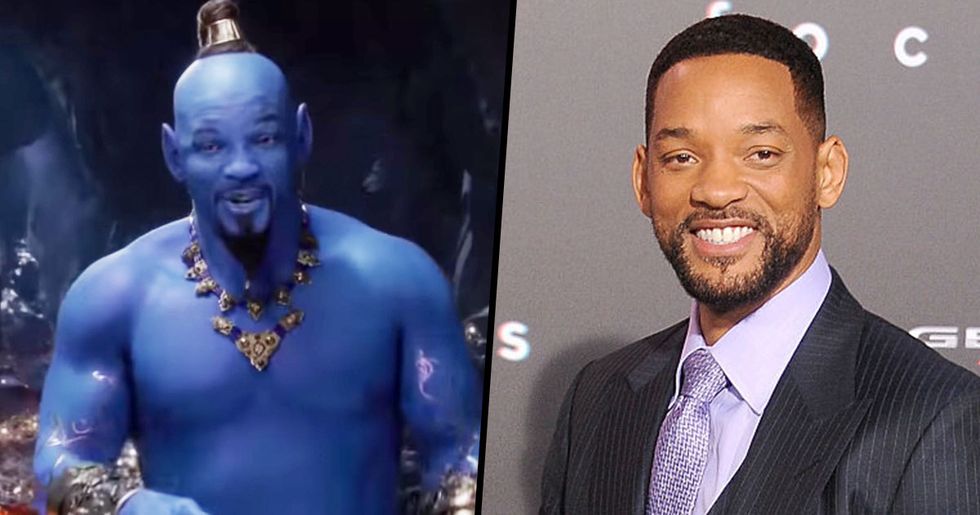 First Look at Will Smith's Genie Has People Questioning the Remake

Through the years we've seen Will Smith in so many colors. He has been a "man in black" and Deadshot red, but this year will be the first time we get to see Smith so bluetiful.

Disney has finally released a trailer for the new live-action version of Aladdin that also gave us a sneak peek of Smith's Genie. Unfortunately, fans' excitement died immediately.

Most of them shared on social media how horrifying the new Genie was. Then hundreds of memes flooded the internet.

But if you look back to the Entertainment Weekly's December interview with Will Smith, the shocking Genie appearance starts to make sense.

It's a good thing, then, that not all people have given up on Aladdin just yet. They say that's just what Disney does. Once the movie comes out, the Genie might look just fine.

Lately, Disney has really been into remaking their classics with CGI.

This year Aladdin joins the list, next to the much anticipated The Lion King.

The new Aladdin trailer was released on Sunday, during Grammy Awards.

But the moment we all waited for, blue Will Smith, appeared to be a huge let-down to Disney fans.

In December 2018, Entertainment Weekly interviewed Smith about his new role.

The first teaser trailer had already debuted two months before, but the Genie wasn't there yet, The Verge reports.

Then, in December, Entertainment Weekly published first ever photos from the movie.

Will Smith still wasn't blue in those photos. He was just a regular Will Smith in Genie clothes.

Naturally, it made fans concerned the Genie wasn't going to be blue at all.

Lots of people expressed their disappointment with the non-blue Genie on social media. But Smith quickly reassured them the blue Genie was coming.

During the interview, Smith told Entertainment Weekly it's "always terrifying" when you set out to do "things that are iconic."

He said he used some of his Bad Boys character traits together with some of The Fresh Prince of Bel-Air to create a unique take on the Genie.

"He was big enough to feel like a force - not so muscular that he looked like he was counting his calories, but formidable enough to look like you knew when he was in the room."

Will Smith also told EW he was going for his own version of the Genie, rather than trying to completely replicate the Robin Williams' one.

He said Aladdin would "stand out as unique even in the Disney world."

Smith had two goals for the character.

He wanted to "both pay homage to the late Robin Williams’ Genie from the iconic 1992 animated Aladdin film, but also bring his own signature comedy to the role."

So the Genie will be kind of the same, but also kind of different.

When asked how he feels about taking over from Robin Williams, Smith gave the perfect answer that explains the shockingly different image of the Genie: "The question is always, where was there meat left on the bone, and with the Robin Williams character, Robin didn’t leave a lot of meat on the bone."

"For me, the first aspect was it was live action, so that meant it would look and feel really different, so I was encouraged by that."

"Because the Genie is timeless, you get to really say and do anything so I started to feel confident that I could deliver something that was an homage to Robin Williams but was musically different and just the flavor of the character would be different enough and unique enough that it would be in a different lane versus trying to compete."

The new Aladdin trailer aired midway through the Grammy Awards 2019.

It shows the scene in which Aladdin approaches the Cave of Wonders, searching for the lamp, and eventually meets the Genie.

Entertainment Weekly asked Smith to comment on this particular scene and what he wanted to show with it.

"I think for that scene, the important thing for me was to make my signature early," Smith said. "So I wanted to make sure that scene captured the comedy, a little bit of the dramatic flavor that was coming, the fun, the music, so we focused really hard on making the introduction to the Genie as iconic as the original introduction, paying an homage to the original but also quickly getting the new signature on to our re-imagining of it."

Basically, the Genie will also be so different because Smith incorporated all of the skills he's gained over the thirty years of his career.

"I got to act and it was comedy and beautiful dramatic scenes, I got to sing, I got to rap, I got to dance, I got to do action sequences."

You can catch Aladdin in theaters on May 24.

But it's hard to say whether the new Disney movie will draw as many people in as its other releases.

Looking on social media, people were horrified by the blue Will Smith.

Jenny Nicholson said on Twitter, "Will Smith genie is what appears in my room when I have sleep paralysis."

Jay Reichman: "God the visual design in this movie really is just garbo ain't it."

Mary: "Why is his face so small? It looks like they shrunk his eyes. the cgi looks like something out of a 2009 movie."

oscar nominated rah rah bitch: "When I was 6 I had a nightmare about kings Ramses from courage the cowardly dog. That was the scariest thing in my life up until I saw Will Smith as the Genie."

Barstool Sports: "Will Smith as Genie is straight nightmare fuel."

Kyle Buchanan: "Honestly the Will Smith genie feels like a spoiler for BIRD BOX because I finally understand what image would make them so fascinated but also want to kill themselves."

Dans of Our Lives: "Feeling okay about Pikachu's hair now."

Magical Space Goat: "He looks like he came out of a Chuck Tingle cover and I can't stop laughing."

Meganyan: "I love this the way the Joker loves burning money."

Steven Davidson: "He should probably be all digital aside from the facial features and voice being the likeness of Smith. I showed 4 people in the house and 1 said 'meh.' The the rest emphatically said 'no', 'why?' or busted a gut laughing about it."

Dave "no clever handle" Vandersteen said, "Look, we all knew this wasn't going to work without Robin Williams."

Then he added, "What we didn't know apparently was that it would also be nightmare fuel that should be burned with fire."

Miles: "They really just painted William Smith blue like that and called it a day huh."

JacobAvalon said, "When the lamp you are trapped in has a Planet Fitness," referring to the Genie's relatively large body and little head.

David Jacobs: "Wow. The Avatar [sequel] is going to be amazing."

Mrs. CelestialVerse: "It's not bad, yet at the same time it's not good."

But not all comments were so full of hopelessness.

Insider says there were lots of people who were still excited to see the "friendly Carpet at Aladdin's side and Raja the tiger strutting behind Princess Jasmine."

Some fans are willing to give the movie a chance.

Sticks: "The cool and popular thing is to say it sucks and looks horrible didn’t bother me one bit I’m still seeing the movie and will wait till I fully see movie to pass judgment but the sheep will say it sucks already."

Raph@el: "I see no problem with this."

✵ captain marvel ✵: "Superman’s mustache is still worse than the genie." Kyle Anthony Toler: "It's looks a lil raw right now, but it's fine. It's Disney so by the time it comes out, the cgi will be tightened up by then."

Insider also suggests that this negative reaction from Aladdin fans could be for one very natural reason.

It's because of the emotional connection fans have to the animated movie and actor Robin Williams who passed away in 2014.